I would ask you to stop me if you’ve heard me say this before, but the fact is you probably have. And I don’t particularly wish to be stopped too soon, even at the risk of repeating myself. That’s because this issue is actually very important to Americans, and I’m not going to quiet down so long as nothing is being done about it – or indeed, as all the wrong actions are being taken.

We have a serious illegal immigration problem in this Country. People, by the millions, flood across our southern 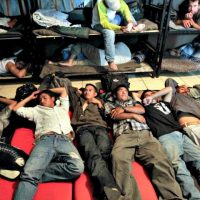 border with virtual impunity, scoffing at our laws by simply coming here before then proceeding to consume all of our public resources (entitlement programs, educational funds, driver’s licenses – the list goes on) meant for legal American residents. Not only does our federal government do virtually nothing to ameliorate this crisis – and it is a crisis, as with numbers like these we are talking about a slow foreign invasion – but we even have local governments – politicians eagerly setting up “sanctuary cities” where the laws and ordinance are designed to protect people in this Country illegally.

And as if we needed further proof of these governments’ flagrant, unabashed brazenness in aiding and abetting the violation of our immigration laws, the local political leaders of Los Angeles County and in Orange County are hard at work making it even worse. Recently, the Board of Supervisors in Los Angeles voted to allocate $10 million of taxpayer money for the legal defense of illegal immigrants who cannot afford an attorney. Now, strictly putting aside the irony of having to write a sentence that includes the passage “legal defense of illegal immigrants”, let’s take a moment to understand what’s actually being done here. We, the taxpayers (or at least the taxpayers of Los Angeles County, in this one example) are being forced to pay legal fees for people who skulked quietly and covertly in to our Country.

But, no, let me really drive this point home. Our Constitution guarantees every American (not, mind, every foreign national who cares to slither in unannounced) the right to legal representation in the event that they are accused of a crime, even to the point that a lawyer will be provided for them at public expense if they cannot afford one. This extraordinary effort to protect the rights of our citizens has already created an onerous burden on the legal system. Public defenders (the lawyers who defend those who can’t pay) are notoriously overworked, sometimes spending an average of less than 15 minutes on each individual client in order to ensure they can at least see everyone who needs them. This effectively means that, despite our best efforts, many of our poorer citizens are simply unable to access quality – or even adequate – legal defense. That $10 million could be used to help Americans who struggle when accused of a crime (many of whom are innocent); instead, the money goes to expanding a system in no condition for expansion, to include people it was never meant to protect.

Of course, the problem runs well beyond Americans’ legal needs. We have thousands of homeless people living on the streets, wanting to find work but struggle and fight those that are given protection and our freedoms. Couldn’t that $10 million be better spent giving Americans a temporary place to stay and job placement assistance? Our schools in many districts are woefully underfunded; couldn’t we use the $10 million to strengthen our children’s education? Would it not be better to spend that money on almost anything benefiting legal Americans who need a hand up, rather than bafflingly diverting it to immigrants who do not even legally belong here in the first place?

Moreover, how far will this go? President-elect Trump has spoken extensively of his plans to curb illegal immigration; will places like Los Angeles or Orange County soon use public money to defend illegals from deportation, thus fighting the federal government in its efforts to perform one of the few tasks delegated to it by the Constitution (that’s defending our borders, by the way)?

Let’s also examine the role of the Republican Party in the State of California and the “Silent Minority” as I call them. The Republican Party in Los Angeles and Orange County have remained silent, absent  through the entire political process in this last election while the rest of the Nation gathered around our President elect Trump, California remained silent and even lost seats to Democrats who sprung forward to support Clinton in huge numbers. The Republicans were strategizing to circumvent the “will of the people”, defying what those of us were unrelenting with our support, we were grossly ignored by our party. So, now we are left with uncompromising, political, local liberal Democrats who will protect their base until the next election at any cost. We, meaning the “silent MAJORITY”  those Republicans who elected Trump, needs to stand up and be heard and protect our cities from the silent minority, those who only wished to protect their seats, and will remain quiet and under the radar until 2018.

The flagrant defiance of “sanctuary cities” and the people that run them is well past having gone too far. Their utter contempt for the rule of law must come to an end and so will their established well worn out seats.