When the presidential campaign was underway, and everyone took it for granted that Donald Trump would lose – after all, how could a straight-talking, America-first alpha male be the people’s choice? – There was widespread paranoia from the liberal sector that the Republican nominee might not accept defeat. Would he publicly attack his 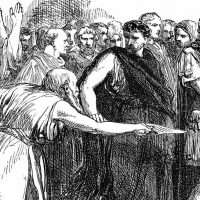 victorious opponent as illegitimate? Would he question the validity of the electoral process, claiming it had been weighted against him? Would he simply take to social media and rile up his followers into mass protests? And wouldn’t it fundamentally undermine the very institution of democracy if he did any of these things?

What’s grimly amusing – and more than a little disturbing – is that now that Mr. Trump has shown everyone he’s not to be underestimated (a lesson you’d think people would have learned well before the election), just about all of that has come from his opposition. There have been questions raised about the vote, allegations of hacking that supposedly handed him the election (something Trump was specifically criticized for speaking about hypothetically during the campaign), and a virtual firestorm of Internet posts from celebrities and the liberal mainstream media screaming that the sky is falling – or, alternatively, explaining why they won’t actually be moving out of the country, as they promised they’d do if Trump won. But what really bothers me is the latest manifestation of this resistance to the election results: a group of women are planning a public demonstration the day after Trump’s inauguration, to register their displeasure with his taking office. These are, of course, liberal activists, the kinds who get into frenzy about LGBTQ issues, hating the police, and stripping law-abiding Americans of their firearms. But it’s concerning to me that women specifically have chosen to stand up like this against Mr. Trump.

What is it that they’re so afraid of? To behold Trump’s portrayal in the media, that’s an easy question to answer: our incoming President hates women. He demeans them, he disrespects them, and he sexually assaults them. Never mind that none of this is actually true.

Let’s start with his attitude. There’s no doubt about it, Donald Trump is a straight-talker. What does that mean? It means that if you have a conversation with him, he’s not going to carefully consider every possible sentence he could utter, calculate the potential political fallout of each one, and feed you the line most delicately measured to reap him the greatest polling benefits. He’s just going to look you in the eye and tell you what’s on his mind, and he’s not going to worry excessively about the possibility that someone somewhere might get their feelings hurt. In other words, he’s going to be a real person, and not a politician. But more than this, he’s going to be a real man.

It’s really quite simple. There was a time when men and women were respected for being straight-talkers. They were appreciated for honesty, directness, and assertiveness. And this was expected of them in their discussions of any given subject they might engage in, including women. A man, who openly admits that he appreciates women on a variety of levels, some of them decidedly base, isn’t a hateful misogynist; he’s an actual, real person. It saddens me that we’ve forgotten this to such a degree that when such a person comes along, we no longer recognize him and instead call him names and become threatened by his presence.

And why? What is there to feel threatened about? Despite what the smear campaigns of the media during the final weeks of the election season would have you believe, Mr. Trump has never harmed anyone. He had vile accusations lobbed against him during that time, it’s true, by women who waited until days before the election to disclose allegations of events that had supposedly occurred many years ago, and who eventually recanted their stories. That’s it. There is no actual case against this man; there are hysterical ramblings, the same kind we are going to have to listen to after the inauguration from these liberal women and men.

Meanwhile, we live in a world that remains under threat from terrorists like ISIS, the insanity of a mad dictator in North Korea threatening a nuclear attack, and the legacy of an outgoing president who did enormous damage to our nation by contributing over a hundred billion dollars to Iran, the largest state sponsor of terror in the world. Obama has done serious damage to the United States, the Middle East, and Europe over the past eight years.

Here, at home the concept of a women’s movement is fine, but let’s address what the movement could be, instead of a duplicitous, narrow-minded, fanaticism. What it should be about is our children’s education which has been peddled by Democrats for nothing but campaign cash. Women should look for choices of where their kids can have the opportunity to go to top schools with better curriculums and better teachers. Let’s focus on the family, how are our children learning, growing, do they graduate high school, or will they be caught up in factions that pose a danger to themselves and others, will they become distracted from opportunities which can perpetuate the cycle of poverty and oppression. Women should hold in the highest regard their families and consider opportunities that will bring about changes. I believe women will have a government that cares about them, families suffering with high unemployment, slow economic growth, high joblessness among our kids who have just graduated college; are at an historic high, under President Obama.

We need a leader like Mr. Trump, one who will take charge and get things done. Yet instead of supporting this man whom the people elected to lead this country and make it great again, many of them have banded together to undermine him before he has made the first stroke of his executive pen.

I am a strong educated woman, and I stand beside Donald Trump. This isn’t because I’m ignoring some of the things he’s done; it’s because he hasn’t actually done anything at all. It’s because he’s guilty of nothing but telling it like it is and refusing to be cowed and weak. It’s because he’s the kind of real man we need to make America great again, and unlike some of my countrywomen, I understand and respect that. I want energy independence, a strong nation, economic and fiscal conservatism, and most of all, I want America Great Again for me and you and our children.

In Elections, There is "A Time for Everything"