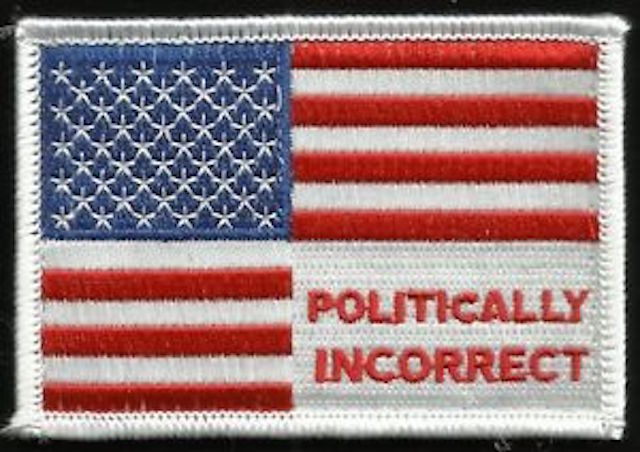 It’s difficult to understand what is going on in the minds of some individuals. Moreover, I don’t think a lot of people even understand the implications or ramifications of their own thoughts and actions. The endless quest for ‘political correctness’ has no boundaries. Even the American flag itself has been deemed offensive. Why?

How many of the world’s citizens would give everything they had to be citizens of the United States? There is no better place to live in terms of freedom, economic opportunity and most importantly the ability to practice the religious faith I choose. I’m proud to be an American citizen. I love my country. Even if I disagreed with another American’s stance on just about everything else, I would commend them if they waved the flag and expressed pride in this country.

Anybody who believes America represents oppression, brutality, or complete lack of regard for human rights is either completely clueless about the world in general or totally insane. Go live in North Korea a year and then tell me how bad you have it in America. The very concept is mind-boggling. Have American soldiers ever run over college students with tanks? Have groups of dissenters been summarily executed. Let’s get a grip on things! A ton of people seem to have gone totally bananas.

If a scientist or other expert announced that some foreign hostile force has released a gas which renders people mentally insane and that the effects of releasing said gas have affected everyone on the planet, I’d be inclined to believe them. The things I am witnessing blow my mind! The only conclusion I can reach is that many of my fellow countrymen are either hopelessly naïve, utterly stupid, or completely nuts. In many cases I think all three apply.

Imagine if we applied what is happening in America to a battlefield situation. If you were the enemy watching our army, you would be utterly dumbfounded. You’d see people question or disregard the authority of those in command, complain about idiotic stuff such as where to go to the bathroom, burn their own flag, protest against discipline, and insist that anyone is welcome to join their ranks without scrutiny. It would be so ridiculous that you would be faced with the unbelievable dilemma of whether to attack and risk casualties or simply let the Americans destroy themselves.

We are definitely a divided nation. Some of it is along geographical lines, but a lot of it isn’t. The ‘millennial’ generation accounts for a lot of our problems. If the ‘millennial’ generation had been the generation facing World War II, I have no doubts the Axis powers would have won. How hard would it be to defeat an army of people whose chief aim is to act in a manner that won’t offend anyone? The left-leaning media and leaders such as our current President are only too happy to contribute to the divisiveness.

The reaction to Fidel Castro’s death serves as a case study of the insanity. I have no idea where the education system failed so many, but Castro was the living embodiment of godless communism. He was a brutal and oppressive dictator. He wasn’t a hero or anyone to admire. Why would President Obama, the Pope and other leaders offer conciliatory words about the man or make comments implying he was anything other than evil. Has everyone forgot about the Cuban Missile Crisis?

Donald Trump’s reaction made perfect sense to me. His attitude was ‘good riddance.’ He apparently didn’t get the memo which said we ought to mourn the loss of such a man. Apparently, Trump is unaware that there are plenty of loveable despots all around the globe…people whose fight for social justice is misinterpreted as oppressive behavior. Silly us.

Let me get this straight: Trump wants to keep jobs and factories in America. He opposes the burning of American flags. He wants to secure our borders to keep us safe…and…oh yeah…he despises communist dictators. However, according to millennials, the media and other misguided souls Trump is the BAD GUY!!! Are you kidding me? Before all sense of reason disappears, here are some things to consider:

Political Correctness has gone way too far. When the American flag itself is deemed offensive, we must then ask do we even have a country? It has to stop now. Under no circumstances should the American flag ever be removed or hidden because it is deemed offensive. Anyone who argues otherwise should be ignored. The flag represents way more than the complaints of the foolhardy.

December 7, 1941: The Only Color Film of the Pearl Harbor Attack