Now that the election is over and Donald Trump is our President-elect, focus has naturally shifted away from the outcome of the contest (hysterically theatrical recounts with no chance of changing anything notwithstanding) to the makeup of Trump’s presidential cabinet. He’s already made some colorful choices, including billionaire investor Wilbur Ross for Secretary of Commerce and wealthy activist Betsy DeVos for Secretary of Education, as well as retired Marine Generals James Mattis as Secretary of Defense and John Kelly for Homeland Security. As a relative rarity for this administration, people with political backgrounds have also been tapped, such as Tom Price, the Georgia lawmaker who was asked to head up the Department of Health and Human Services. So far, just about every pick has been controversial, and the likely Secretary of State – an especially important role – is no exception.

As of now, Exxon Mobil CEO Rex Tillerson has been chosen to head up the agency which Trump’s rival 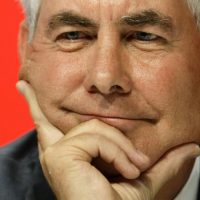 Hillary Clinton once ran. As yet another non politician who has spent his life in the real world rather than jockeying for votes, the criticism of Tillerson’s supposed inexperience began almost immediately. He’s been with Exxon for 41 years out of his 64 year-to-date life, and during that time he hasn’t been negotiating with other countries for the advantage of the United States. He has, however, been negotiating with other companies for the profit of Exxon Mobil, which is arguably an even more cut-throat arena.

Tillerson has also come under fire for his longstanding acquaintance with Russian President Vladimir Putin. He is literally a friend of Russia; the former center of the Soviet Union awarded him its Order of Friendship in 2013, just before Russian relations with the United States became strained by Putin’s activities in Ukraine. Critics worry whether Tillerson could be objective in deciding whether to maintain sanctions against his Russian friends. But then, the same concerns have been raised (again, somewhat hysterically) about Donald Trump himself, so why people are particularly worried now is hard to say.

The fact is that Tillerson is much like Trump himself: an experienced and successful businessman who has earned a fortune through his hard work and understanding of capitalism – the lifeblood of the American economy. His unique experience would make him an unusually effective Secretary of State. This is probably one of the key reasons that Tillerson was chosen, as Trump has made no secret of the fact that he respects business success as one of the two most important traits that he believes a person can have (the other is loyalty). Tillerson, a man who stuck with one company for four decades and did very well there, should be a very attractive pick.

Tillerson has experience running negotiations for everything from land-use rights to labor issues to transportation deals. Exxon has negotiated with foreign and U.S. governments and major international conglomerates, a $370 billion global company with operations in approximately 50 countries. He is a top diplomat who realistically addresses the motivations of foreign leaders and convinces them to work with, not against the U.S.

In the event Tillerson should fail a confirmation hearing, one of his potential backups has been suggested as Mitt Romney. This is a man who does have Tillerson’s business acumen to boast – but very little else. To be sure, Romney would be laughed out of the room in any test of loyalty. This is a man who did his best to stop Donald Trump from winning the Republican nomination, following orders from the party establishment to undermine the frontrunner with vile, baseless attacks. Of course, now that the primaries are long over and Trump has steamrolled over all opposition, no doubt Romney would be only too happy to accept a position in the administration. But after what he tried to do to Trump, he deserves no such honor. It isn’t hard to see that Rex Tillerson is an infinitely better choice for Secretary of State.