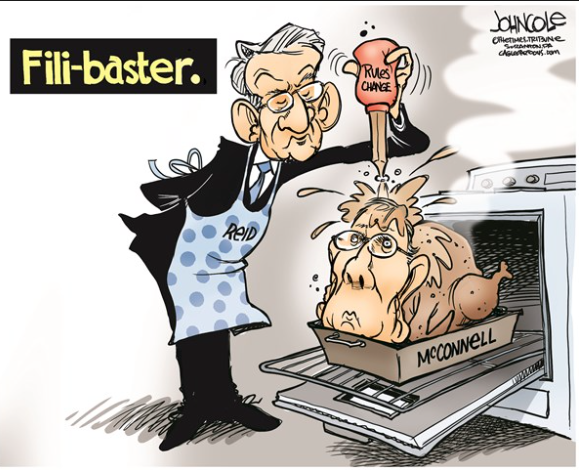 Thanks to God, Donald Trump, his campaign team, dedicated activists around the country, the voters, and the Dems nominating Hillary Clinton, we have the opportunity to Make America Great Again. We may not get another opportunity. [By “we” I mean Donald Trump and the movement of millions dedicated American patriots who made him president.] Yet there has been remarkably little discussion of how the filibuster will affect Donald Trump’s agenda.

Under the filibuster rule as last modified by the Democrats in November 2013, legislation and Supreme Court nominations require 60 votes in the Senate. The Republicans only have 52, and that assumes they all side with Donald Trump. Donald Trump might pick up some Democrat Senate votes from states Donald Trump won by a wide margin where the Democrat Senators are up for reelection in 2018. However, getting to 60 will be very difficult if not impossible. The Dems have shown near lock step unity both when they are in the majority and when they are in the minority.

Since Donald Trump’s election, the Dems have shown they intend fanatical, fight for every inch opposition. This will especially be so on immigration, the global warming hoax, and control of the American healthcare system, which are key to the Democrat party’s political interests. Furthermore, vested economic interests such as green crony capitalists will join with the Dems to keep Donald Trump from making significant changes. The alligators living very comfortably in the swamp in Washington DC do not want it drained.

We cannot “reconcile” our differences

Similarly, with only a reconciliation bill, the Reps cannot repeal or modify Dodd-Frank which is inhibiting small business lending and concentrating power in the federal government, or make any improvements to immigration law.

Furthermore, given the importance of the Supreme Court, we have to anticipate the Dems will filibuster any good, i.e. Scalia like, Supreme Court nominations, in which case the only Supreme Court justices confirmed will be those Chuck Schumer and the Senate Dems approve. At best they will be wishy-washy moderate Reps who will drift to the left once confirmed.

This may be what the establishment wants

At this point, the Establishment Reps may not want to openly oppose Donald Trump. By keeping the filibuster rule as is, the Senate Dems can stop a much of Donald Trump’s agenda, and Establishment Reps can report “sorry Mr. President, we did our best, but those dang Democrats blocked us again. We’ll just have to give in to what the Dems want again. Ah shucks.”

Imagine what we can a without the filibuster rule

We can repeal all of Obamacare and craft a replacement based on what we think will work best.

We can build the wall without years of preparing environmental impact reports and years of follow-on litigation.

We can repeal all Obama regulations we want to get rid of without years of rulemaking procedures and follow-on litigation in courts packed with Obama judges.

We can develop American energy without years of litigation in courts packed with Obama judges.

We can change Federal law to allow for school choice.

We can repeal or amend Dodd-Frank.

We can modify civil service rules to make the federal bureaucracy more efficient and accountable.

While there is only one reconciliation bill allowed each year, without the filibuster, the Donald Trump and the Rep Congress can tweak and modify programs and laws when and as needed.

And these are just some examples that come to mind.

But what if the Democrats control the Senate, or heaven forbid, the Senate, House and the Presidency?

Harry Reid said before the election when he expected Hillary Clinton would win and the Dems would control the Senate, if the Republicans continue using the filibuster, the Senate “will evolve with a majority vote determining stuff. It is going to happen.”

The voters will hold Donald Trump and the Reps accountable for the results over the next two and four years, whether or not the Senate Dems are allowed to block Donald Trump’s agenda. Therefore, let’s implement Donald Trump’s agenda to make America great again and be judged on the results. We may not get another chance. We have to make this one work, and if we do, 2016 may be a major realignment election ushering in a new era of peace, prosperity and freedom under conservative government.