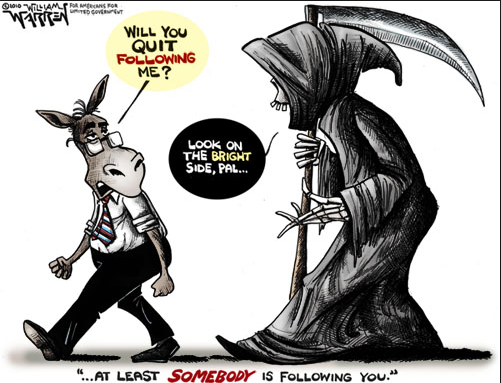 The presidential election cycle is thankfully over, and for most of us things will return to normal and we will turn our attention to other things. It was a big win for conservatives, not only did we capture the White House but it was a big night all over the country for governors and state legislatures as Republicans cut a wide swath of victory across the nation. But as recent election history tells us, hell hath no fury like a liberal scorned, or one who lost an election.

In the days and weeks leading up to the election, the hand-wringing du jour for the Left was would Donald Trump accept the results of an election that by their assumption was just a formality really, why even vote? Hillary was clearly going to be the winner. Let’s just save everyone a lot of time and just declare her the president. But that is not what happened. The American people profoundly fed up with executive orders, regulations, and candidates they did not like being shoved down their collective throats pushed back. And now, irony of ironies, that very question is being asked of Hillary Clinton and her supporters. The answer looks to be a big fat no.

On Nov. 25, Green Party presidential candidate Jill Stein presented to the state of Wisconsin a petition for a state wide recount. Stein also plans to mount a recount in Michigan and Pennsylvania. This will be a costly endeavor; however the Stein campaign claims that they have raised roughly $4 million to undertake the recount. Because Stein only received 1% of the popular vote nationally, most political experts do not think this is anything more than a fundraising stunt for the Green Party. But could this just be a distraction for a much more sinister, more organized attempt to delegitimize the incoming Trump administration and ignore the voice and the will of the American people?

Presidential electors from all over the nation are receiving letters, emails, and even phone calls urging them to change their votes to Hillary Clinton when the Electoral College meets on Dec. 19 to officially elect Donald Trump president. Some electors are getting hundreds of these letters a day. As would be expected, these letters and emails are filled with erroneous information, all designed to cast doubt. In many states, there are laws against electors who change their votes to go against electoral votes that are awarded each candidate in every state. The penalties differ by state some will impose fines on what is known as “faithless” electors, others can carry up to a year in jail. But a handful of states have no such penalties. Those are the states in which electors face the most harassment, and in a few cases, there are even death threats being issued to electors.

So is there anyone who does not live under a rock that thinks this is a purely grassroots spontaneous movement? Is this really nothing more than just a bunch of left wing hippies rolling out of bed around noon one day and deciding then and there that they would launch this attempt to get their gal Hillary to the White House? Hardly.

What is a more likely scenario is the fact that this is one of those instances where the Left runs rings around conservatives. Even though six months or a year ago it would have not occurred to liberals that Donald Trump would today be the president-elect. But even the most unfathomable of outcomes must be planned for. And a safe bet would be that liberals started planning this effort long ago. They lined up their money guys, their IT guys, and their volunteers just in case. Whether or not the Democrat Party is officially involved is unknown. What is known is that at any time the Clinton campaign or President Obama could call off the dogs and urge their supporters to accept the outcome of the election. That will not happen because the dirty little secret is that Clinton and Obama are no doubt enjoying it. Anything that will weaken the Trump presidency or just make trouble for it softens the drubbing their Party took on Election Day. Chances are the only sound coming from the White House will be crickets. Call it unrealistic, naiveté, or something else, but for the most part conservatives are well aware how the Left operates, but they believe that everybody operates the way they do, by the book.

This effort is quite possibly taking place in every state where the Left thinks they can flip electors. Most electoral college experts say the percentage of electors that would be needed to toss out the election results and give the win to Hillary Clinton is virtually impossible and therefore not a threat. Is the real goal here to prevent the states in question from certifying their election results and ultimately that states electors not being allowed to vote? This is also a possibility. But what does the Left do when this effort fizzles as badly as the Clinton campaign?

This may be the last stand for liberals this election cycle, but don’t expect them to hear the fat lady warming up any time soon.