For most people, the word “outsourcing” stirs up feelings of anger, resentment, and – in far too many cases – a certain sense of defeated resignation. Overwhelmingly, and more and more as time goes on, major American 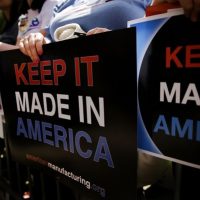 corporations are laying off workers in manufacturing and other important industries stateside and shipping those jobs overseas, rebuilding their factories in places like Mexico or on the Asian continent. It’s a great boon for those economies, no doubt, but it leaves millions of hardworking Americans without jobs – jobs that were they still available here, would pay well. The loss of the manufacturing sector is one key reason why Americans without a college education or even with an education find it so hard to get by nowadays, and the sharp spike in demand for degrees is threatening to price them out of the market for many. Outsourcing is an insidious phenomenon that causes a thousand attendant problems – but what are you going to do? Of course private companies are going to prefer hiring people overseas, where government regulations are more lax and economical to deal with, and average pay is mere pennies on the dollar compared with what it is here in our own Country. Our steady bleeding of vital jobs is absolutely inevitable.

Or maybe not. The reason companies seek foreign labor is because it is just good business for them to do so, so – and I realize it’s practically heretical to suggest we should actually stand up for ourselves nowadays – what happens if we make it clear to them that putting Americans out of work isn’t going to be so profitable for them anymore? Apparently, a whole lot.

Ford is slowly moving production to Mexico. Our precious Apple iPhones are made in China and Carrier – AND CARRIER (more about that later). And just try finding a single good in Wal-Mart that didn’t come from an Asian country. During the campaign Donald Trump suggested we do something about this – specifically, that we levy taxes (tariffs) on products that get imported into the United States. And now that he’s been elected, the results have been staggering. Before he’s even had a chance to take office, Ford and Apple are showing signs of panic, and have already begun walking back plans to expand their overseas production efforts. So, it seems profit minded corporations don’t like doing things that cost them money. Who knew?

And if the strategy of imposing tariffs on imported goods sounds somehow cruel or unusual, rest assured that it is neither. Actually, there’s nothing more American. In the earliest days of our Republic, the Founding Fathers envisioned import tariffs paying for virtually all federal government functions – and for a while, they did. It’s shocking to most modern people, but with no federal income tax to speak of and virtually all expenses being covered by tariffs, the federal government used to operate with no budget deficit or debt outside of war time. Educated people in post-revolutionary times mused that tariffs were the fairest possible way to pay for government, as they essentially constituted a completely voluntary luxury tax. Don’t want to pay tariffs (or rather, the inflated prices companies must charge to recoup them)? No problem: just buy American.

And yet, since NAFTA (an agreement which Trump has strongly denounced) was passed, America has lost one-third of its manufacturing jobs, and some 50,000 factories have grown wings and flown to China since that nation joined the World Trade Organization. This is unconscionable, because the people who once labored in those factories were responsible for building the infrastructure of America. We are the nation we are today because a lot of people worked very hard to build us up, yet the microsecond it becomes financially convenient, our corporations – the ones that help drive our economy – reward their workers with betrayal and flee to other countries, their arms heavy with jobs and profits.

If the actions of Apple and Ford are any guide, however, that age may be coming to an end. The corporate sector is already scurrying frantically in the aftermath of Trump’s election; just imagine what will happen after he’s sworn in and can begin implementing his agenda.

Well before President Elect Trump, our new Commander-in-Chief, begins to take his official place as President of our great country, President-elect Trump called Greg Hayes, CEO of Carrier’s parent company United Technologies. Between the two they strategically work out a plan to keep this major manufacturer from fleeing to Mexico with its jobs and its revenue base.

Now, what did President electTrump call it? Oh that’s right, “The Art of the Deal”.