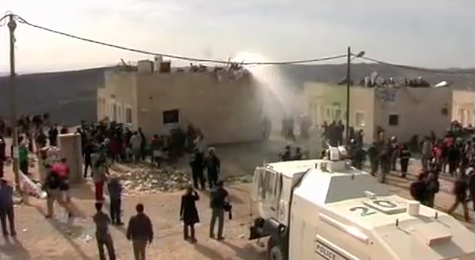 Hanukkah is approaching us and history is repeating itself once again–just in a different way. Because of an international law, the people of the Israeli settlement of Amona are being forced to evacuate on the 25th of December. Here is a great explanation of the law regarding Amona written by Caroline Glick.

The High Court and the Knesset argue about who has the upper hand in Israel. The problem with the court is that most are liberal and only go by perception and claims instead of actually looking into facts and investigations. The court is not held accountable for injustice law making since they feel they do not answer to anyone in Israel.

I believe what Israel needs is to have a constitution. A constitution similar to what the United States made by the people for the people, because if we truly want Israel to be truly independent we must break away from international law.

There are plenty of cases like this that the Jewish people had to evacuate from their own homes, even including our Prime Minister Netanyahu as he explained to the people of Amona. The State sent in a request to the court for an extension of the evacuation for an extra month. A decision will be reached on Thursday, 10 Am Israel time. The courts sent a paper for the Amona residence to evacuate without confrontation. I am thinking to myself how could this happen in Jewish land, and on Hanukkah of all times when it is supposed to be a time of joy.

Playing politics needs to stop, especially when it involves families who simply want to live in their homeland, which belongs to the Jewish people. Its time for Israel to have its own constitution and its own set of laws made by the people for the people.