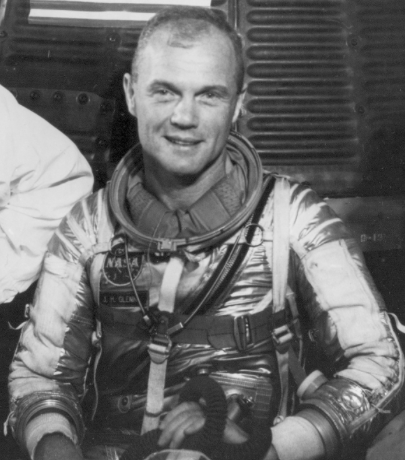 There was a time when national pride mattered. It not only mattered but it was actually embodied by 7 men: Alan Shepard, Gus Grissom, John Glenn, Scott Carpenter, Wally Schirra, Gordon Cooper, and Deke Slayton.

Imagine what it must have been like to be an American in the 1950’s. We had emerged from World War II as a Superpower. Unfortunately, there was another Superpower: The Soviet Union. It was capitalism and freedom squarely facing off against communism and oppression. It was us against them. We were in it for keeps and we would never have let the ‘Red Menace’ beat us.

Despite being resolute in our commitment to preserving our way of life were weren’t immune to fear. It was about the size of a soccer ball, but Sputnik represented a clear threat to all Americans. They had put an artificial satellite into orbit. We had no idea what Sputnik was capable of or what the Soviets might do next. We could only watch helplessly as the Soviets began the exploration of space. We were no where near them in terms of such technology.

It was a scary time, but America wasn’t built on the backs of cowards or people who could accept backing down from a challenge. This country doesn’t sit and watch, it acts. We don’t look at challenges and say ‘it’s hopeless, we can never catch up.’ Instead we embrace the seemingly impossible. It applies to individuals and it certainly applies to nations: Only those who dare to achieve great things ever achieve great things.

The call went out and America’s greatest pilots answered. They came from all branches of the military and they all shared one thing: Devotion and love for this country. Think of the scariest roller coaster you have ever ridden. Multiply that by a thousand and you get a pretty good idea of what it is like to be a test pilot. Only the most courageous of souls would ever contemplate, let alone embrace a life of such danger. Yet, it was men such as these that served as what Tom Wolfe once observed as ‘single combat warriors.’ Rather than a fight between large armies, the space race represented a fight between a few individuals who in essence represented an entire army.

Our champions took the form of 7 men. They were the most elite group of pilots ever assembled. The first American astronauts not only had to be supreme pilots but also perfect physical examples as well. Only the best of the very best were selected and don’t doubt for a second that these men were not aware of their status. Test pilots are extraordinary humans. They are driven to be the best. The very notion that someone could be a better pilot than themselves is a foreign concept. The Mercury 7 were men addicted to competition and being the best. They competed fiercely amongst themselves, but they never lost sight of the fact that the true competitor was the Soviets.

Never before and never again has America put all of its hopes in the hands of so few. If these men failed, it didn’t mean just personal failure, it represented the failure of an entire country. Talk about pressure! However, these men weren’t the types who would ever choke under pressure. They did their jobs and they paved the way for the ultimate achievement: landing men on the moon. These men were worthy heroes. They were competitors but also friends. A special bond existed amongst them.

Like any heroes, these men were mortal and just as susceptible to the quirks of fate as any of us. John Glenn was no exception. He was actually chosen as the third best in the group. Alan Shepard was picked to be the first American in space. Gus Grissom was picked second and flew a similar flight to Shepard’s. The first two manned American space missions were sub-parabolic arcs. The capsules where shot up into space and landed a couple hundred miles from the launch pad.

Fate chose John Glenn to fly the first American manned space flight that would entail orbiting the Earth. Make no mistake, every Mercury flight was extremely important, but it was Glenn’s flight that made us believe we could not only compete with, but eventually surpass the Russians in the space race.

One could look at the space race as a sign of things to come. We outlasted the Soviets in space just as the United States outlived the former USSR. The astronauts were only a part of the equation. It took the collective efforts of hundreds of thousands of the brightest minds in this country to eventually land men on the moon. A lot of people contributed, but the astronauts were the face of the program.

After his flight, John Glenn became an American hero of monumental proportions. He became a living legend. Though he would later serve his country as a U.S. Senator, Glenn’s accomplishment represented something the entire nation could point to with pride. It was an accomplishment free of internal political ramifications. It was the rarest of events because at its core, John Glenn’s flight represented a victory for all Americans.

I can’t even imagine an event occurring today where a single individual is tasked with carrying American pride on their back. Even more extraordinary, I can’t imagine such a person embodying what John Glenn represented. He was a hero and he was the rare hero whose personal life was befitting of the status he obtained. Glenn was a tower of morality amongst the astronaut corps. He was devoted to his wife and family. He steered clear of controversy and never did anything to taint either his image or that of the American space program. He never let us down. Moreover, he better than the others truly understood what the Mercury 7 meant to America.

It has been said there are no second acts in American life, but like any man of legend, that old adage didn’t seem to apply John Glenn. Long after all his peers had hung up their astronaut suits for good, Glenn dusted his off and take one more ride into space, at the ripe old age of 77. Inspiring us all once again and proving that age, unlike gravity, doesn’t represent a limitation.

The Historic Obama Presidency – For All the Wrong Reasons