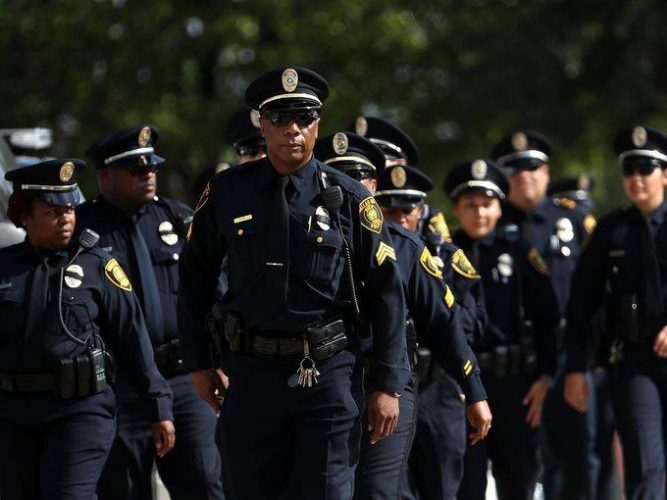 “Of those men and women in blue who died in 2016, 62 were killed by gunfire – a marked rise from the 39 the year before – about a dozen of them shot by gunmen who set out to kill police.”

“What we’re seeing now, this year, is a big increase in gunfire murders of police officers. The methodology, where they are targeted attacks or ambushes or where people are lured into attacks, is up too. We haven’t seen that since the late ‘60s or ‘70s, when there was a tremendous amount of anti-police terrorism.”

Sutton, like many others in law enforcement, say that tension between police and minority groups like Black Lives Matter that have organized to focus attention on profiling and what they argue is unwarranted use of force has led some to see those in uniform as the enemy.

“It legitimizes a call for terror, a call for violence,” Sutton said. “It adds an element of danger for law enforcement.”

He added, “Of course not everyone who is in the protests believes that. But when there’s a mob in place and fervor builds up, people do things they wouldn’t normally do independently. And it can inspire lone wolf attacks. There are weak-minded people, some mentally disturbed, who absorb this call to action and act upon it.”

The deadliest assaults occurred in July in Dallas and Baton Rouge amid protests over black men who had died in encounters with police.

A black gunman in Dallas opened fire on officers at a Black Lives Matter protest, killing five officers and wounding four others.

Tensions also rose in Baton Rouge, where thousands of people were angry over the death of 37-year-old Alton Sterling, a black man killed by white Baton Rouge officers after a confrontation at a convenience store.

Here’s a video of the families honoring the fallen Dallas police officers. The shooting marked the deadliest day for law enforcement officers since 9/11.

Those in law enforcement say they know they are signing up for a potentially dangerous job when they enter the profession.

“There are risks every officer knows going in,” Sutton said. “That includes everything from going up against an armed suspect who is going to resist and going to do everything to escape, including shooting to try and kill you, to being struck by a car during a traffic stop.”

He went on, “But what is particularly frightening and disturbing at this point are the assassinations and entrapments, where police officers are lured into situations [in order] to kill them.”