They struck at the University of Louisiana at Lafayette. Two white males ran out of a car, tore off her hijab, hit her and stole her wallet. One of these mysterious muggers was wearing a Trump hat. 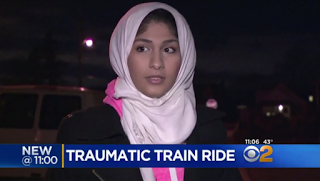 The president of the Muslim Students Association claimed that the attack had rattled the campus. The ACLU was “outraged” and was as eager as the “victim” to connect the attack to Trump. It was even more outraged that the imaginary attackers had, “shouted slurs and wore Donald Trump clothing.”

It was only hours after the election and the media eagerly jumped on the story. But the 18-year-old Middle Eastern student had made it all up and police charged her with filing a false report.

A month later they stuck again. Yasmin Seweid, an 18-year-old Baruch College student in New York City, claimed that “three white racists” tried to tear off her hijab, shouted Trump’s name, along with, “Look it’s a fucking terrorist”, “go back to your country” and “take that rag off your head”.

“The president-elect just promotes this stuff and is very anti-Muslim, very Islamophobic, and he’s just condoning it,” she whined. CAIR got into the game. A hate crimes investigation was launched.

And the NYPD found that she had made it all up. Yasmin now faces charges for her deception. But her lies potentially endangered the “brown-eyed and brown-haired” man whom police had begun to suspect. A man who might have been arrested and charged for a crime that never happened. What caused two 18-year-old Muslim women 1,400 miles apart to invent the same very specific attack?

On yet another November, a year before the nameless Muslim in Louisiana faked her hate crime, an 18-year-old Muslim woman in the UK claimed that she had been assaulted because of her hijab. The supposed victim, a Miss Choudhury, turned out to be a liar and was fined for wasting police time.

Despite their geographical separation the three cases have a great deal in common. All three of the perpetrators were 18-year-old Muslim women. All associated the fake attacks with their wearing of the hijab. And their lies were calculated to exploit recent events, the Muslim terror attacks in Paris and Trump’s election, which the media had played up as being traumatic to Muslims.

The rash of hijab attacks after Trump’s election was an especially extraordinary phenomenon.

At nearly the same time as the Louisiana Muslim hoax, a Muslim student at San Diego State University claimed that her attackers ripped off her hijab and invoked the dreaded name of Trump before stealing her purse and backpack. Like the UK hoaxer, one of her attackers was wearing a gray hoodie. The perps, a white and Latino man, who love Trump and hate Muslims, have apparently yet to be found. 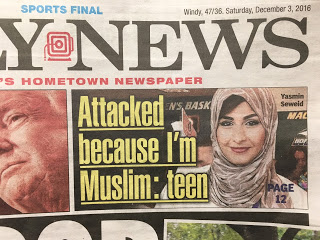 Meanwhile at the University of New Mexico, a Muslim freshman, likely the same age as the other claimants, charged that a man in a Trump shirt had tried to tear off her hijab and accused her of being a terrorist. She insisted however that she did not want him to be charged for his attack and UNM’s Office of Equal Opportunity refused to confirm or deny the existence of the case.

Some versions of the post-Trump hijab attack escalated the real or threatened violence.

A day or so later, a University of Michigan student claimed that she was forced to remove her hijab by a drunk white man who threatened to set her on fire. Police determined that it was a hoax.

Nasro Hassan, an 18-year-old Muslim student at the University of Washington, claimed that a man in a black hoodie attacked her with a bottle likely because of her hijab. Esra Altun, a 19-year-old Muslim student at San Jose State University, claimed that she was choked with her hijab a day after Trump’s win. Her alleged attacker was a “fair-skinned male” wearing a “dark-colored hoodie”.

The attack was initially reported to have happened on Election Day, but Altun insisted that it really took place on the next day after Trump had officially won. “It is a weird coincidence that it happened after Donald Trump was elected.” Like so many of these cases, it was important to link the attack to Trump.

It certainly is a weird coincidence that a rash of these attacks by white men on Muslim women happened right then. Or that these attackers, when they aren’t wearing Trump hats and shirts on college campuses where that alone is nearly enough to trigger a hate crime investigation, favor the hoodie.

The stories follow a similar pattern. A burst of media coverage, a campus rally by activists from the local Muslim Students Association, followed by a fearful condemnation from the university president.

But then the stories die down and fade away. There is no big climax. Just dead air.

The women at the center of these stories are college freshmen and sophomores getting their first taste of campus life. They are away from their families, perhaps for the first time in their lives, in a different environment and tempted to relax their religiosity. And then the hijab-haters strike allowing them to show off their religiosity, to impress their families, and their victimhood, to wow their progressive peers. They often tell their stories on social media and urge their friends to pass their tales along.

“Trump America is real and I witnessed it first hand last night!” Yasmin Seweid, the woman at the center of the latest hijab hoax, posted on Facebook. “I want to show people this is real,” the University of Mexico Muslim claimed. There are loud assertions of Muslim patriotism and condemnations of hate.

But what is the truth?

Did a coordinated gang of Trump marauders suddenly assail a single Muslim woman one campus at a time across the country? Or was there an outbreak of hysteria fed by Islamist agendas and media noise?

It is curious that so many of the incidents occurred on campuses, where many Muslim teenagers dip their toes into political activism for the first time, and that so many of the supposed victims are teenagers who haven’t even reached their twenties. Are there really gangs of Trump supporters targeting 18-year old Muslim women on college campuses? Or is something else going on.

In Salem, the popular wisdom that witchcraft was a threat opened the door for teenage girls to offer up hysterical accusations. The accusations led to a mass hysteria of other accusers, collective panic and political persecution. Similar “witch hunts” have haunted us before. The Islamophobia witch hunt is only the latest manifestation of an obsession with an imaginary crisis exploding into mass hysteria.

There is no way to know which of the unsolved cases is true. But mass hysteria is the dangerous symptom of a deeper conflict. And those who promote it ought to contemplate the consequences.

The obsession with an imaginary Islamophobia crisis has been called a witch hunt before. But the hijab hate crimes hysteria eerily resembles the mass hysteria of Salem with teenage girls, some of whom like Yasmin are clearly emotionally unstable, coming forward to tell fantastic psychosexual stories of being attacked for their hijabs by Trump supporters, and then being lavished with attention and praise.

The tales of roving Trump gangs tearing off the hijabs of Muslim teenage girls caters to the parochial xenophobia of Muslims convinced that their daughters are at risk of being dishonored by Americans, to the Islamist agendas of CAIR and the MSA who use victimhood to build a political empire of theocracy, and to the media which is desperate to attribute racist violence to Trump any way that it can.

The hijab witch hunts are as twisted as anything in Salem. And just as malignant and dangerous.

President Donald Trump: Save the Coal Industry, Save America