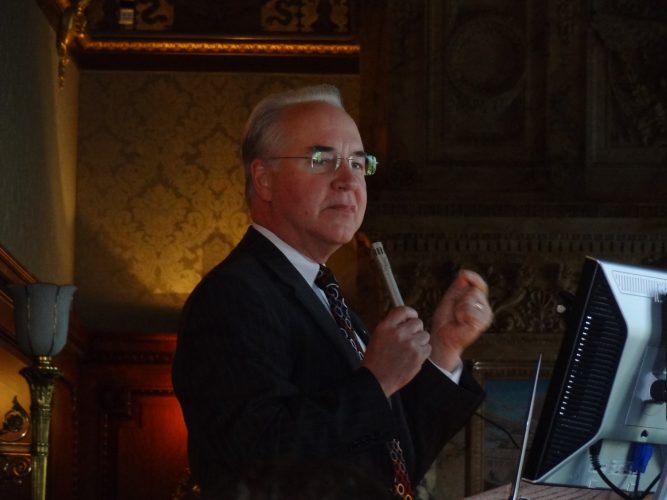 In case you had any doubts about President-elect Donald Trump’s commitment to repealing Obamacare, you can now relax a little.

Tom Price, the Republican congressman and former physician from Georgia, has been named by Donald Trump to head the Department of Health and Human Services.

Price, a former orthopedic surgeon, is known as Congress’ most astute critic of the Affordable Care Act, having practiced medicine himself and understanding fully its many flaws. He will be ready on Day One to find a way to replace the 2010 health care law, which was passed by Democrats without a single Republican vote.

He’s already put forward a workable plan, the Empowering Patients First Act, that would vastly improve our nation’s health care system without nationalizing it — something that ObamaCare was designed to do eventually.

Price’s plan is “a highly detailed legislative proposal that would repeal the Affordable Care Act and replace it with patient-centered provisions that would control costs and expand coverage in the private health insurance markets,” said Robert Moffitt, a senior fellow in The Heritage Foundation’s Center for Health Policy Studies.

“And, in fact, major elements of Price’s plan have already been put into House Speaker Paul Ryan’s health care proposal. Look for it to move quickly after Trump takes office.

Among other things, Price proposes giving individuals tax relief for buying health insurance, part of letting them not only own their health insurance but also making it portable from job to job. He also pushes for expanded Health Savings Accounts, which would let savers use pretax dollars for health care costs. He would also let individuals and groups of small businesses buy insurance across state lines, making health insurance a competitive market once again.

And gone would be the needless regulations requiring the insured to buy coverage for things they don’t want or need. Insurance tailored to the individual’s needs, not to a government bureaucracy’s whims.

But for those who remain nervous about changing the ObamaCare status quo, remember: Price is a doctor. He knows how the system works. ObamaCare, as it was designed, is totally dysfunctional and has delivered on none of its major promises made by congressional Democrats and President Obama.

They said ObamaCare would lead to 25 million uninsured getting insurance; the number is a bit over 10 million.

It would “bend the cost curve down,” and cut premiums for the average family by $2,500 a year; premium costs are now rising at double-digit rates.

And patients could keep their doctor and their insurance plan, if they liked; a total lie, as the millions who have lost coverage and been forced to change family doctors can attest.”

On Special Report, Rich Edson also shares the details of Price’s plan that calls for removing the health care law, along with its rules for business, customers and insurance companies: