California PolitiChicks contributor Michelle Mears reports:
“A video of a college professor in Southern California ranting during class on the election of president-elect Donald Trump has set off a whirlwind of controversy.”

Cox was videotaped by one of her students calling Trump’s election, “an act of terrorism.

“Our nation has been divided we have been assaulted. It is an act of terrorism, said Cox. “We are really back to a civil war. And I don’t mean in a fighting way but our nation is divided clearly as it was in civil war times.”

Cox describes Trump and his team as, “A white supremacist and a vice president that is one of the most anti-gay humans in this country.”

In an interview with CBS LA Josh Recalde-Martinez, a member of the Young Republicans Club at the college said, “At this point it’s not even education anymore, its indoctrination.”

The Republican Group filed a formal complaint against the professor’s rant.

Recalde-Martinez posted the video on his Facebook page Dec. 5 where it has been viewed 18-thousand times and growing. There is also a website called Ratemyteacher.com and Professorwatchlist.com where Cox is now listed as a professor pushing liberal views. Professorwatchlist.com is a project associated with Turning Point USA.

During the rant Cox felt her students needed advice on how to feel about Trump’s winning the election, “I will go over some coping skills First of all we are the majority more of us voted to not have this kind of leadership and we didn’t win because of the way our electoral college is set up.”

On Dec. 7, The Coast Federation of Educators, the union representing faculty at Orange Coast College posted a warning on its webpage.

“This is an illegal recording without the permission of the instructor. The student will be identified and may be facing legal action,” wrote the union leaders.

Recalde-Martinez said he wants the union to know they are not going to take down the video or be intimidated.

The union also posted the following warnings of retribution against the student on the Young Republicans Facebook page. 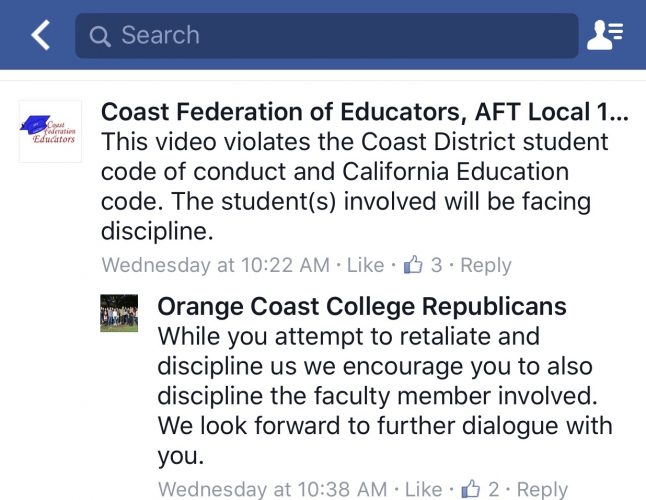 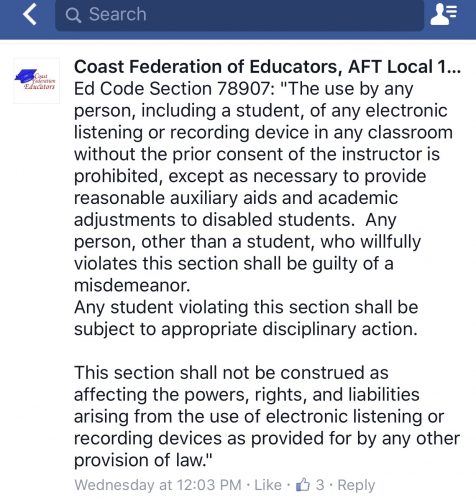 Attorney Shawn Steel who is a Republican National Committee member from California has volunteered to represent the Young Republicans. The student who shot the video has not been identified for fear of retaliation.

Recalde-Martinez said, “We want students to know that we will help protect them against the constant leftist indoctrination they are experiencing in class by exposing behavior like this.”

Michael Finch: The Absurdity of "Unity"