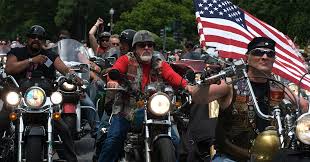 This should be very interesting.

While several groups are planning to protest President-elect Donald Trump’s inauguration next month, Bikers for Trump just showed up to secure some space amid the protests.

“Bikers for Trump founder Chris Cox said he had to negotiate with National Park Service officials to find space for the motorcyclists because anti-Trump groups had scooped up nearly every location for their “disruption” events surrounding the Jan. 20 inauguration.
Securing a designated area for the thousands of bikers expected to roll into Washington to watch Mr. Trump take the oath of office is crucial to avoiding clashes between the two sides, he said.

“We’ve already won. There’s no reason for these guys to be going shoulder to shoulder against the Black Lives Matter and the rest of the [protesting] guys,” Mr. Cox said. “This is a victory tour.”

The bikers are accustomed to being outnumbered and face-to-face with protesters, having often set themselves up as buffers between demonstrators and supporters at Trump rallies.

Bikers for Trump became a political movement in its own right, as it held massive rallies and organized support for Mr. Trump across battleground states. It was one of just two pro-Trump groups and by far the largest pro-Trump organization to request permits, according to National Park Service records.

The other pro-Trump group, which identified itself as “Let America Hear Us, Roar for Trump!” on its permit application, requested use of a small park at Dupont Circle on Inauguration Day for 500 people to celebrate and call for a peaceful transition.

Mr. Cox, who requested a permit for 5,000 people but noted that as many as 10,000 bikers might attend, said he was discouraged from applying last week by the permit manager at the National Park Service Office in Washington.

“She was telling me that they had already given all the permits out to the anti-Trump movement — permits for maybe 100,000 or 200,000 people,” Mr. Cox recalled. “I wasn’t happy. I told her I had thousands and thousands of bikers coming into town, and if she didn’t give me a spot, they were going to be just mingling around and would end up hanging out where all the Trump protesters are, and there’s going to be big problems and then people are going to wonder why.”

National Park Service spokesman Michael Litterst said the permitting decisions are made irrespective of a group’s affiliation. However, he said the scarcity of available space is consistent with the agency’s first-come, first-serve policy.

“I don’t know the specifics of how the plans for the Bikers for Trump event have evolved or what their specific discussions have been with staff, but that scenario aligns with how our permitting process works in general,” he said. “Permits are processed in the order in which they are received, and when there are conflicts for location and/or time, the first group to submit their application gets first use.”

Mr. Cox said that he eventually was able to submit the request for use of John Marshal Park in the Judiciary Square neighborhood, not far from the U.S. Capitol and just off the inaugural parade route.
He said he also is negotiating with the Inaugural Committee for bikers to participate in the parade.
Bikers for Trump are expected to come from as far as California for the inauguration, including large contingents from Florida and Pennsylvania.”

December 7, 1941: The Only Color Film of the Pearl Harbor Attack