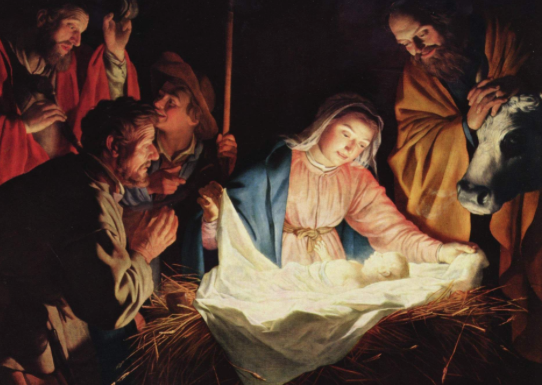 JUDEA, ISRAEL (BC press):  Due to the census ordered recently by Caesar Augustus, the town of Bethlehem has swelled to more than twice the population over the past few weeks, and rooms are hard to come by for latecomers.  A young couple learned this the hard way when they arrived from Nazareth in Galilee last night.

Joseph ben Heli had been leading the donkey on which his young and very pregnant wife, Mary, was riding.  When they arrived in Bethlehem, Mary’s contractions had grown closer together. Unfortunately every Inn along the way into town was full to overflowing and there was nowhere for Joseph to provide a warm private place for his wife.

Mary describes being very tired and anxious. “I knew it was going to be busy here,” she said, “but this is crazy. I never thought we’d find a place to stop. The pains were intense and so close. I thought I was going to have the baby on the side of the road.”

Joseph was overwhelmed as well, and felt somewhat stressed seeing how uncomfortable Mary had been the last few miles into town. When the contractions began, he tried to hurry, yet didn’t want to cause Mary more pain. “I checked every door,” Joseph stated, “and the answer was always the same: ‘We’ve got no more room’. I didn’t know what to do. I felt completely inadequate. We were both grateful that we finally found this place.”

‘This Place’ is a stable hewn out of the limestone behind one of the area inns. While it is reasonably warm and dry, the smell leaves a lot to be desired and noise of animals is quite loud. It didn’t seem to bother the mother and her newborn son however, as they are now resting comfortably. The baby is wrapped warmly in swaddling clothes and the parents have made a makeshift bed for him in the cattle’s feeding trough.

A few locals have come to see this new baby boy, having heard of his unusual nursery, but another story they have described is somewhat incredulous, and some of them are even calling his birth a miracle. For one thing, a bright star which recently appeared seemingly shone its light down upon the stable.

A young shepherd, who said his name is Simon, described the scene in the fields just outside of town adding, “I was scared.” When he was asked why, his face beamed: “Because the whole sky was full of angels! But then they told us not to be afraid. They started to sing.”

He was asked to describe the singing, but another shepherd interrupted:  “Tell about the one angel and what he said!”

Simon looked at his friend (a little annoyed).  “I was getting to that,” he said, “but I wanted to tell about the singing.” He continued, “It was the most amazing thing I’ve ever heard. My mom and sisters used to sing to me when I was little and I always thought they sounded nice, but this was just…”

“Amazing and beautiful, scary but exciting all at the same time,” the other shepherd, who didn’t want to give his name, interjected.

“And then the angel who told us not to be afraid led us here to this place,” Simon continued. “He said that he came with good news. That Messiah was born! That our Savior was born in this very place last night!”

“The whole sky was full of them!” another shepherd added excitedly.

Some townsfolk are skeptical of the shepherd’s account, as word spread throughout the area late last night and into this morning. “I didn’t hear anything unusual,” said one woman who was cleaning sheets of one of the inns. “I heard the commotion of the shepherds as they came running into town last night, and my husband and I came out to see what was going on. We didn’t hear any singing.”

An out-of-towner did hear the angelic singing, but not the message, as she and her husband had arrived in Bethlehem around the same time the child had been born. “We had seen the star for the past few days as we were traveling. My husband had followed it to town, because it seemed to be leading the way for many of us who have come from Capernaum.”

While many who did witness or hear the angelic voices believe this is a localized event, we have heard from our affiliates in the eastern lands of Persia that the star has been visible for some time and that many of the area’s astrologers and sages have been studying it. It’s been confirmed that they have sent a delegate of three Magi who will come bearing special gifts for the baby, believing him to be a King. Other people believe that the baby’s name holds some significance as well, as he is called Immanuel. It’s been said that Isaiah the prophet mentioned an unusual birth over 700 years ago and that his name would mean “God with us”.

It does seem as if there is something special about the birth of this baby, but only time will tell how much, if any, impact his birth will have, and how far reaching news will travel that God has come to earth as a baby to save human kind.

As for now, the census continues to draw more people into this usually quiet little hill side town.  And yet, with the humble surroundings in which this baby was born last night, it seems probable that there is more to the story. We will be sure to give updates as more unfolds.

Christmas Morning in a Jewish Home