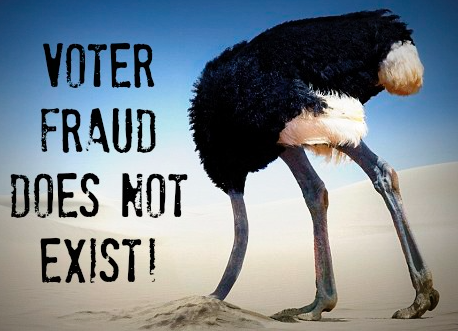 There they go again.

President-Elect Trump takes on the media by publicly outing the massive voter fraud in California—and they’re losing what’s left of their feeble minds.

Mr. Trump stated what so many of us in California have known for years, but the establishment and the media refuses to acknowledge—voter fraud is widespread and rampant.

All part of a plan—funded by leftist, George Soros—to legislatively undermine the integrity of the process in the name of “voter participation”. (See the recipe below.)

In fact, the same media—including the LA Times—crowing about how Donald Trump is a liar, has routinely ignored mountains of evidence presented before the California Elections & Redistricting Committee.

I should know. I was the Vice-Chairman of that committee for 3 years, where I fought the Democrat’s blatant attempts to undermine the integrity of the vote with every new bill.

With law after law, the Democrats created a voting system that encourages fraud, and makes voter integrity and accountability impossible.

Treat anyone who proposes a Voter ID bill like Alinsky would—shame them, shun them, ridicule, then repeat.

Make access so easy that you can register to vote online up to 15 days prior to Election Day and still vote. (They pushed for same day voter registration so that people who “forgot” to register could still register & “participate” as late as Election Day).

Make a major push to move as many voters as possible to mail-in ballots (permanent absentee ballots).
Spend millions of taxpayer dollars handing out Drivers Licenses to millions of people illegally present in the state (with an asterisk stating, “Federal Limits Apply”).

“If the voter does not check either the “Yes” or “No” box (for whether or not they are US Citizen), and the registration is otherwise complete, the registration should be processed normally and entered on the voter rolls.” (See screenshot of official publication below on California Secretary of State Website regarding CA compliance with National Voting Rights Act (NVRA): http://elections.cdn.sos.ca.gov/nvra/laws-standards/pdf/complete.pdf 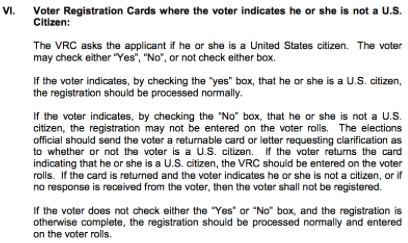 When you look at what California has done to protect the ruling class of Democrat politicians and powerful public sector unions who represent the legions of bureaucrats, it’s diabolically simple and diabolically clever.

And easy to understand why.

Hundreds of millions in contracts and pay increases for tens of thousands of public sector unions and permanent political careers for politicians are at stake, and as long as the unions keep their cronies in power, the gravy train continues.

All you have to do is follow the money.

They created a system where it was virtually impossible to ever catch anyone cheating, removed all verification processes, automatically register all drivers license holders—whether they like it or not, and then launch that program immediately after granting every one of the untold millions of illegal aliens in California a drivers license.

When the Election Integrity Project brought forth a report on documented voter fraud, the LA Times and other publications slamming Mr. Trump—you guessed it—(yawn) ignored the facts.

In true Alinsky fashion, any Republican in California who mentioned voter fraud—let alone tried to do something about it—was ridiculed in the press. (Actually the term “press” should only be used for investigative journalists who expose fraud and corruption—not those who participate in the cover up. So from now on, they’ll be referred to as the “fake media”). Now the same “fake media” is going after Trump right now—calling him an outright liar for telling the truth they refuse to tell, or even investigate.

As an Assemblyman, I was the most vocal critic of issuing drivers licenses to illegal aliens—and was called every name in the book—but my dire warnings are now reality. I warned that they would be used as a gateway ID, that it would lead to being able to vote, board airplanes and qualify for taxpayer-paid benefits.

And all of that has come true.

In January of 2015, I warned that TSA has confirmed that the new “AB60” drivers licenses could be used to board an airplane in a Breitbart Column entitled, “Democrats Lie, Illegals Fly: New CA licenses accepted by TSA”.

At the time, the author of the bill (AB60)—Assemblyman Luis Alejo—promised that the special drivers licenses marked, “Federal Limits Apply” could never be used to vote, board an airplane, or apply for taxpayer-paid benefits. In the end, he simply lied. And the media willingly spread his lie.

Because they knew by the time anyone figured it out, it would be too late.

The Soros Plan was to test drive these initiatives in California, and then incrementally spread them state-to-state by hook or by crook. Meaning, if they can’t get voters of each battleground state to approve it, they’ll use the power of the Federal Government and the National Voting Rights Act to force these “reforms” on every state.

That’s why it’s so crucial to have someone of Donald Trump’s stature—the 45th President of the United States—acknowledge it, and appoint people like Kansas Secretary of State, Chris Kobach, to begin the process of reversing the climate of corruption.