Donald Trump is going to win by a landslide.

There I said it.

And for very simple, non-political reasons.

Ronald Reagan’s chastisement of liberals—“so much of what they know just isn’t so”— applies to the “mainstream media” now more than ever.

It’s why the likes of NBC, ABC and CBS are so willing to explain in the greatest detail why what Hillary Clinton does wrong is not wrong, but if you or I or God forbid, Donald Trump did it, it would be the worst crime of the century.

There’s something about hypocrisy that stirs something deep in the hearts of Americans.

Those are fighting words when it comes to the rule of law. One of the great things about our country—one that every school child knows—is that we are all equal under the law. That from the poorest and least among us all the way up to the powerful and even the president.

If you ignore all the details and close one eye and take in the bigger picture, you’ll note the same pundits who thought FBI Director James Comey was brilliant—and that it was completely appropriate to hold a press conference in July to announce that even though Hillary had broken numerous laws, he wasn’t going to do anything about it—are now fit to be tied.
The very idea that he would dare communicate a relevant fact to Congress and by extension to the American people is what they find offensive?

And just look at their headlines. 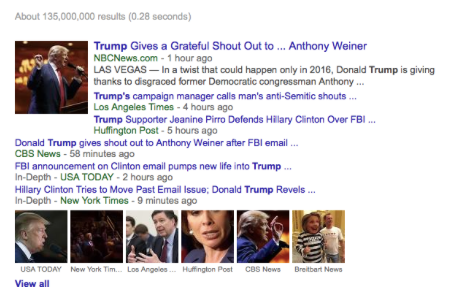 Almost every headline insults Trump “Trump Gives a Grateful Shout Out to…Anthony Weiner”—or gives the appearance that while things have narrowed slightly, Trump really has no chance, but nothing of the true significance of Hillary’s self-inflicted trouble is indicated.

It’s been this way the entire general election. Hillary’s in real trouble, and the media carries water for her to explain away the truth.

When you see the headlines after Hillary’s campaign suffers a setback, it’s enlightening. 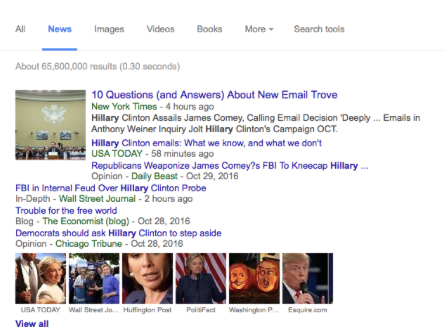 Look at the headline above, “10 Questions (and answers) About New Email Trove”.

Exactly how does the New York Times plan on providing answers when it couldn’t possibly know what to ask about 650,000 emails they’ve never see. Not even the FBI does. But the truth is—that’s not the story. The story is that 650,000 emails were withheld from a federal investigation by someone who should know better—Former Secretary of State Hillary Clinton. You’ll note her name isn’t in most of the headlines about the scandal her hiding emails has caused.

We all know that the cover up is always much worse than the original crime, but can you imagine a headline in the Watergate Scandal that failed to mention President Nixon or “his men”?

But you’d never know that from the headlines.

When you’re simply reporting, rather than trying to influence the news, you craft a headline to inform and entice readers to want to read the rest of your story.

So, something like this might do the job—“650,000 New Emails Discovered on Clinton Aide’s Shared Laptop”. It’s informative, and makes you wonder ‘who’d she share it with’? Then you could simply explain the truth—that the Clinton campaign could have released rather than hidden the emails from the very beginning.

That’s the rub. This latest story reveals more about the character of Hillary Clinton than anything her campaign or her opponents could communicate. After all, leadership starts at the top. If Hillary had led by example and been forthcoming with all the emails in a timely fashion months ago, this whole story might have been much ado about nothing. And she might be well on the way to becoming the next President of the United States. But rather than be forthcoming, Hillary fostered a climate of secrecy. Rather than simply hand all the emails over and trust the FBI and the Dept of Justice (DOJ) professionals to sort through them, she turned her emails over to her phalanx of lawyers, and then destroyed the ones that might get in the way of her ultimate ambition—becoming the first woman President.

Michael Goodwin’s observation in the New York Post was the most telling line in all the coverage of the email scandal coverage or lack thereof.

“We’re likely to see more of those headlines in coming days. It’s the Clinton way, where truth is always the enemy.”

In spite of the media acting as an extension of Hillary Clinton’s campaign, I believe she will lose, and lose big.

Because campaigns are not won or lost based solely on the issues.

Trump appears to care about blue collar workers and those most heavily impacted by the disastrous policies of the last 8 years of the Obama administration: Talking about unchecked illegal immigration, skyrocketing terrorist attacks and in particular, unprecedented increases in ObamaCare premiums. Trump describes the ObamaCare increases as “astronomical”, “disastrous” and is perceived as deeply empathetic to the impact on ordinary, hard-working Americans.

While Hillary and her cohorts in the media act as if this massive transfer of hard-earned money from your pocketbook to those being subsidized in exchange for their votes, is no big deal.

It is a very big deal. A majority of Americans—and a much higher percentage if you only look at working Americans—are deeply troubled by these unexpected hits to their budget.

And Obama owns this issue. He put his name on it, and Hillary endorsed it.

Trump wants to undo the damage.

But this latest email scandal—regardless of the outcome—has served to reinforce the impression that almost 2/3’s of Americans have that Hillary is not trustworthy.

And in the end, impressions will carry more weight than the New York or Los Angeles Times could ever hope to—in their wildest dreams!

That’s why I predict Donald Trump in a landslide on November 8th.