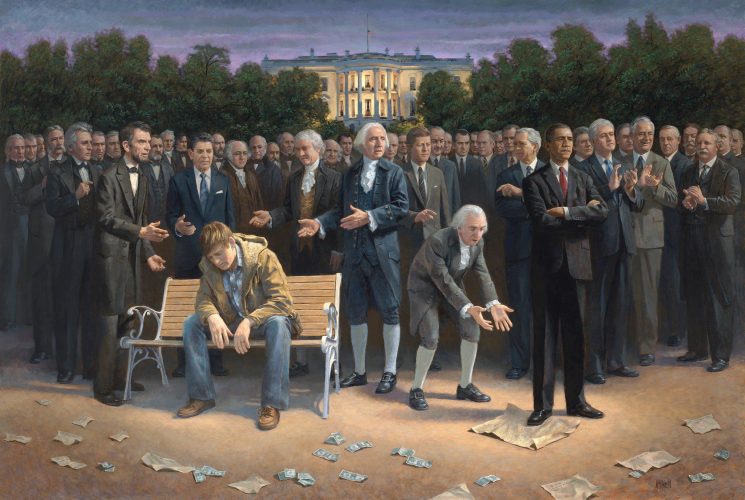 There is certainly a great deal of post-election noise occurring in the United States right now. Pollsters are trying to figure out how their numbers were so wrong. Media pundits are completely whipped-lashed by Tuesday night’s results. College campuses are offering comfort zones to students who can’t seem to ‘cope’ with the idea of a “President Trump”. Protesters are taking to the streets to demonstrate their disapproval of the president-elect.

However, nobody is really talking about the man who got Trump elected: The forgotten man.

“Whatever the impression Trump may have given you — a carnival barker, a hero, a jerk, a courageous leader — he brilliantly tapped into a deep vein of millions of American men and women who believe they have been forgotten by the government they pay for. These good people have been alienated by the elites who dominate American government and culture and civic life.

On Tuesday night, they found a home.

The forgotten man believes that the Obama administration doesn’t care about him. The forgotten man knows that the government put into place regulations of economic activity that put him out of work or into a lower-paying job. These forgotten men and women resent the Obama administration’s telling them they must have health insurance or they will be taxed for it and then so incompetently manipulating the marketplace as to cause the cost of that insurance — often an unwanted product — to skyrocket.

These good folks cringed when their family doctor told them that he could no longer afford to treat them because the feds had overregulated the practice of medicine. They simply couldn’t believe that their own government would make the practice of medicine so expensive that doctors in droves could not afford to stay in business. And they were outraged when their doctors told them the feds could see their medical records and dictate their medical treatment.

The forgotten man has profound resentment for a government that is telling him how to live. The forgotten man’s union dues have shot up. His union leaders use his dues to support political candidates he doesn’t know or like. Yet he has usually voted for the Democrats — out of a traditional belief that the Democrats would think of him and his needs when framing federal legislation. They haven’t.

Trump got all that. Trump tapped into all that as no presidential candidate had since Ronald Reagan in 1980.

Here is the video of The Forgotten Man beautifully illustrated by Jon McNaughton:

Against the background of a darkening sky, all of the past Presidents of the United States gather before the White House, as if to commemorate some great event. In the left hand corner of the painting sits a man. That man, with his head bowed appears distraught and hopeless as he contemplates his future. Some of the past Presidents try to console him while looking in the direction of the modern Presidents as if to say, “What have you done?” Many of these modern Presidents, seemingly oblivious to anything other than themselves, appear to be congratulating each other on their great accomplishments. In front of the man, paper trash is blowing in the wind. Crumpled dollar bills, legislative documents, and, like a whisper—the U.S. Constitution beneath the foot of Barack Obama.

This writer can certainly relate to the forgotten man… as she has also felt forgotten, too.

The Collapsing Democratic Party (under Obama) in Six Stunning Charts