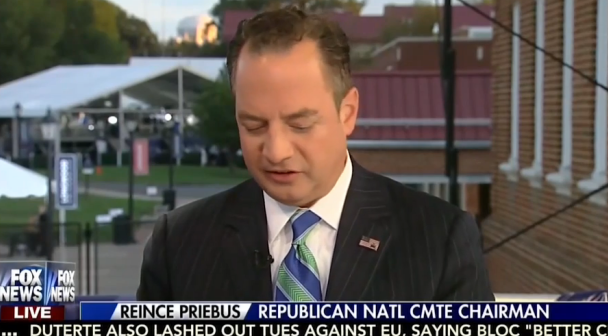 “No Washington insider, regardless of who it is, should serve as President Trump’s chief of staff,” Tea Party Patriots co-founder Jennybeth Martin said soon after Donald Trump won the election. “Appointing Reince Priebus (or any other DC establishment insider) would make it more difficult, not less, for President Trump to achieve the change the people voted for. It’s time to drain the swamp — not promote insiders beholden to the Washington establishment who helped create it.”

But that’s apparently exactly what president-elect Donald Trump has done, naming one of the most insider Republicans around, Republican National Committee President Reince Priebus, as his Chief of Staff.

Priebus would be a reassuring presence to establishment Republicans still uncertain about what a Trump White House will look like.

He would also bring decades of political experience and understanding of the wheels of power — as a Washington insider.

Trump campaigned on the message that he’d flip Washington upside down and would “drain the swamp” of elite politicians who have been in Washington for decades.

But perhaps the NYTimes explained the real reasons behind Trump’s decision:

The selection of Mr. Priebus to run the White House staff is partly a reflection of concern among Mr. Trump’s children, especially Ivanka Trump, as well as her husband, Jared Kushner, that the job should not be held by someone too controversial, according to several people familiar with the internal decision making.

Movie Director Posts a "Call to Violence" Regarding Trump's Win