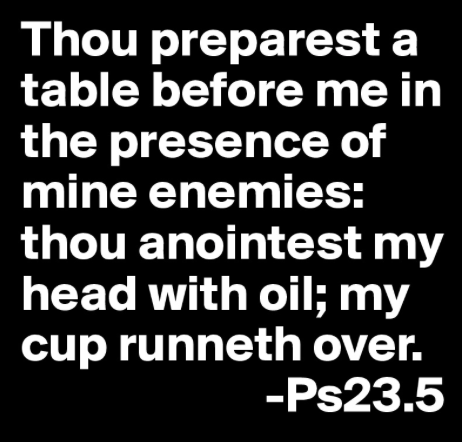 We all knew it would only be a matter of time before the press would start complaining about access to President-elect Donald Trump.

The latest “scandal” from MSN.com sums up the total cluelessness and utter failure of the mainstream media: Donald Trump took his family out to dinner and the press didn’t get invited.   I can’t possibly imagine why he would do this, given the objective and fair manner in which they have treated him during the campaign and after the election.  Why would he forget to inform them on his every movement?

Anyone who is capable of rational thinking, knows there is a serious problem with the way the press has handled Donald Trump. Of course I don’t see Trump as a modern-day King David, but the verse about a “table in the presence of one’s enemies” immediately came to mind. I don’t know how pious Trump is, but it’s difficult to imagine how anyone could have endured the level of constant criticism the press has subjected him to and not somehow be changed. Frankly I fear for the man’s life every day. Since my view of Trump is a positive one, I have to give God the credit for allowing him to accomplish such an incredible political triumph. I know a lot of people see things quite differently, but I do believe Trump has been protected by God and I pray that God continues to protect and bless him.

There were many reasons why I voted for Trump and there are many reasons why Hillary Clinton scared me. To me, the overriding issue became immigration policy. If one is able to allow themselves to think rationally about it and consider the possibility that the enforcement of immigration policies designed to protect American citizens does not constitute blatant racism, Trump’s policies make a lot of sense. Instead of a country with open borders, I much rather prefer a country that exercises some judgment and caution.

Consider this analogy: Suppose you work for a medium sized company and they throw a party for all employees. Assume they send out formal invitations to their employees and their families. The party is to celebrate a company milestone so a lot of money has been spent on a very extravagant outdoor picnic. It’s going to be such a nice party that anyone not invited would be envious and want to attend.  Given that employees can bring their families (along with various bigwigs), there is a strong possibility that the average attendee will not know everyone at the party. And what happens if people walking by decide they want to attend, too? So as the number of crashers increases, problems will emerge. Just for kicks, suppose all the party crashers are either crude, loud, or possibly even criminals?  At some point, people are going to notice the foul language and people acting wildly and ask, “Who the heck are all these people?” People are going to start thinking, “This doesn’t feel like our corporate culture at all.” Worst case scenario: You have a shootout between rival drug gangs erupt at a picnic for a company that sells investment portfolios.

All of this sounds ludicrous, but at some point the CEO would have to say “we have got to take control here”–so anyone unable to provide a valid invitation will be thrown out. You would think the invited guests would welcome this move, but suppose the actual employees, the people who have a right to be there and whose safety is in jeopardy, decide to criticize the CEO instead.  They express outrage and say “you can’t throw people out” and “these people make our corporate culture more diverse” or “these folks pose no danger to us.” Such a reaction would be completely nonsensical and absurd.

However, welcome to present-day United States. That is exactly what people are arguing. I don’t hate anyone because of their race or religion. I don’t oppose immigration. What I do oppose is millions of undocumented non-citizens walking around this country. Most of them are probably harmless, but you’d have to be a fool to think this situation doesn’t pose a threat to all of us. We have Obama to thank for this. Trump is simply the person who intends to do the job Obama should have done. If you are here illegally, you have no right to stay. The blame rests with the man who let the situation get out of control, not the man who intends to fix it. Call me nuts but I find comfort in Trump’s common sense approach to national security. We can all be simple-minded idiots and decry Trump for insensitive remarks, but the world isn’t pretty and the truth isn’t pretty. People may not want to hear it, but common sense has to take hold at some point.

Trump protestors don’t even realize the incompatible nature of their desired goals. They claim Trump will trample the rights of women and the LGBT community. At the same time they decry Trump’s proposal to screen Muslim immigrants. Do any of these people realize that Islamic extremists could care less about women’s rights and would have no problem executing anyone belonging to the LGBT group. The mainstream media is to blame for this. In their desire to simply attack any and everything Trump does, they have created a situation where you have people protesting for totally illogical reasons. We have a right to assemble, but nothing says the media has to cover it. They are only adding fuel to the fire. Trumps own home has been under siege thanks to the media.

I completely understand why Donald Trump would want to ditch the media because they are clearly Trump’s enemies by any measure. The MSN.com argument is that the press was present when JFK was assassinated and Reagan was shot, and had they not been present the events wouldn’t have been reported properly. But is the press arguing they only want to be there in case Trump is assassinated? That is no reason to want to follow the man. We have a right to free speech, but I hope Trump reacts appropriately to the mainstream media. I’d agree that the press needs to cover the Presidents activities, but nothing says it has to be the mainstream media. I hope Trump invites journalists from small news organizations to cover him. None of them could write worse than the garbage I see in The Washington Post. I hope he does it. Then the mainstream outlets would have to go to the small news outlets and beg for information. It would serve them right.