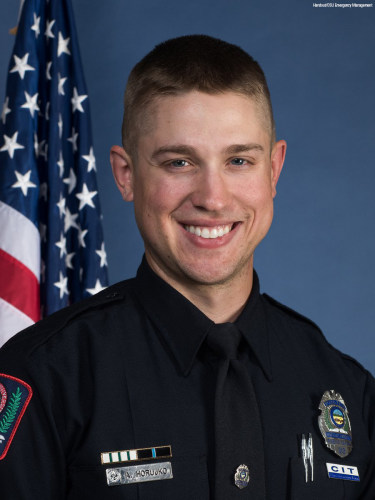 Ohio State University’s public safety director praised the quick and responsible actions of the police officer who killed the suspect in Monday’s attack on campus.

“We all owe [him] a debt of gratitude,” Monica Moll said of OSU Police Officer Alan Horujko.

Horujko, 28, is a nearly two-year veteran of the campus police department, and Moll said he took action immediately after seeing Abdul Razak Ali Artan allegedly drive a vehicle into a number of pedestrians.

At 9:52 a.m. local time, Horujko radioed to his dispatcher that a car had hit “seven or eight” people.

A short time later, he radioed that the man had a knife, as Artan got out of the vehicle and began slashing bystanders with a butcher knife.

Moll praised Horujko for a “fabulous job” in “using deadly force to stop the threat”.

Alan Horujko, a Fairfield High School and OSU alumnus, joined the university police department Jan. 13, 2015, after graduating with a degree in security and intelligence.

Officer Horujko is hailed as a “hero.” However, that doesn’t come as a surprise to many of his former classmates:

Eleven people have been hospitalized since the attack at Ohio State University.

Tommy Hilfiger: Melania Trump Is Very Beautiful; Any Designer Should Be Proud to Dress Her

Tim Donnelly: "No Voter Fraud in California" and Other Fake Headlines