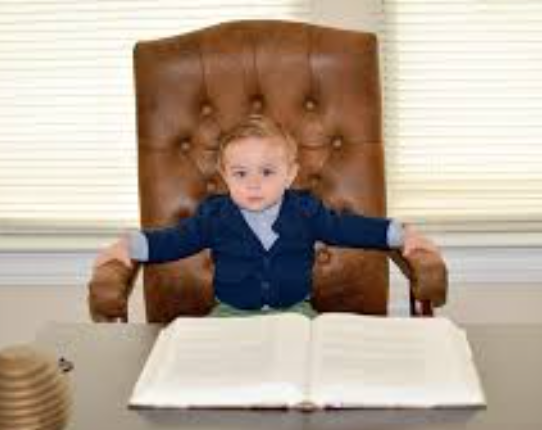 When we were young, were told we could grow up to be anything we dreamed–even President. Today, depending on where you grow up and your parents’ political beliefs, encouraging children to be President is a long lost memory, a shadow of what America used to be. Now kids are told they can’t grow up to be president unless they are imbedded within the governmental establishment. They must go to “their” schools (Harvard, Yale) and run in “their” groups (Senators, Representatives). No one from the “outside” can grow up to president anymore.

Must our political leaders be born on the governmental track and be groomed by the establishment to become a leader in today’s political society?  Have we subconsciously released a declaration to every elementary school student that if they fall into a certain economic class or are attending inner city schools or community colleges and state universities, they should kiss the American Dream of being a public servant good-bye? Have we set a precedent in which only those “appointed” by the establishment will become President?

This has been exemplified by the media declaring Hillary Clinton president even before election day, and by conservative party leaders turning their back on the “outsider”, which the electorate chose to be their candidate. Many kids would certainly understand the feelings of rejection which Donald Trump must feel from the Republican leadership. No one would ever try something such as running for President, if they thought people who were supposed to be supporters, would turn on them so viscously.

Should we just tell children to forget the American dream because the government elites now decide who will and won’t enter the political elite circle of honor?  No, but as election day draws closer, with an “outsider” competing against an “insider”, maybe we should reconsider our approach in how we raise future U.S Presidents.

Think about it. Future presidents are currently matriculating through our educational system. Kindergarteners are entering school with a clean slate and lives full of hopes and dreams. But today’s parents are so disgusted with the way government has deteriorated in morality and process, we don’t encourage our kids to serve in those capacities.

In the past, parents telling their kids they could be anything they ever dreamed of being, used the position of president as something just short of being able to stretch your hand and touch a star. To strive to be the leader of the free world. What could be a higher, more admirable goal?

Now what do we help our children aspire to be in life? What now is the highest we can encourage our children to reach? Is America really exceptional and full of hopes and dreams any more?

Personally, our family never used the presidency as a goal. We always told our kids to be the best they can be in life. Not telling them we knew what God had set out as their purpose, but instilling in them that it is their task to find their purpose and go for it with all their might.

Maybe America really isn’t what it used to be anymore. The blame can’t all be placed on the shoulders of politicians. As citizens, we need to accept a portion of that blame. We have failed to hold politicians accountable for their actions. We have abdicated our responsibility of staying on top of the actions and behaviors of people in Washington. Holding them accountable. We have raised elected officials to a level where most citizens believe, they can’t say anything or their words will fall on deaf ears. We have failed to continue teaching history from primary sources, for accurate details of how things happened in history. We are complacent and allow revisionist history in our schools. We emphasize technology and pop culture as our primary focus. It’s so much easier to allow our children to raise and teach themselves, calling it “independence” rather than being responsible parents. It takes effort to fact check our kids school books and insure students are learning true history. When we lack the desire to put out effort, we are degrading our country.

The office of the President is truly a position of servanthood, not power. We are very willing to once again enter the world of Peace Corps encouragement and other missionary types of activities for our students and kids. These types of vocations are exceedingly important in today’s world. However, in doing this we give future generations the idea, we do our best work in remote villages, in countries outside our own. To guarantee our nation is constantly maintaining a servant’s heart, we must allow for opportunities of service to be valued, in our own country.

Where are we headed, if we encourage today’s young people to seek opportunities of service outside our borders. Service in other countries, with social and religious emphasis, is beyond admirable and should always be supported. When those who choose to not stay abroad forever and return to our homeland, why shouldn’t we encourage them to use their experiences to now better our nation and people.

We should encourage those who have seen the world and truly worked abroad, to seek positions of public servants. First responders, teachers, and yes, even the presidency. When people grow up in ivory towers and spend their young adulthood, staring out the window of their ivory towers of learning, they don’t receive the type of real life experience our nation’s leaders once had and which gave them a humanity, to relate to others.

We need to begin today to grow our leaders of tomorrow, steeped in the knowledge of The Constitution and having a love for our country once again.

Obama to Make Islam a Race

Political Campaigns Used to Mean Something