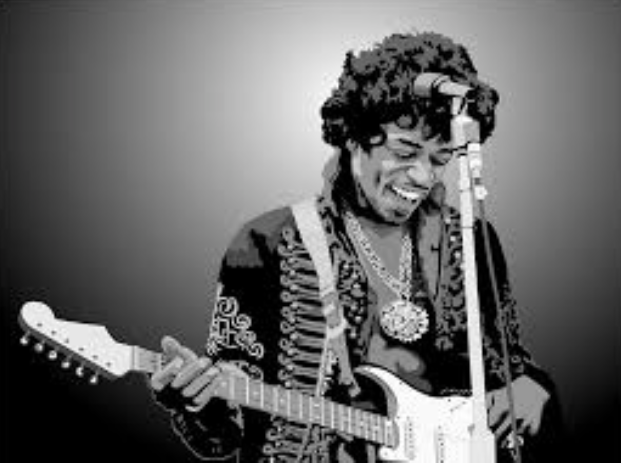 August 21, 1968, I was 11 years old. I was supposed to be spending the night with a friend of mine who shall remain nameless here. Instead we were at a concert venue called the Virginia Beach Dome in Virginia Beach, VA. The look and design of the dome was designed as a tribute to the architecture of Frank Lloyd Wright. It had existed as a concert venue since the late 1950’s. The first artist to play there was Louis Armstrong.

Our mission of the evening was to see The Jimi Hendrix Experience. This was to be my first concert experience and I was disobeying my Mother to do so. Hendrix had previously played the Virginia Beach Dome on April 4, 1968. That same night Martin Luther King was murdered in Memphis.

The British band, The Soft Machine, was the opening act that night. They had been many British bands opening for Hendrix during that summer’s American tour. Sonically, they were twice as loud as Hendrix.

After about 35 minutes of The Soft Machine, we were more than ready for Jimi Hendrix. Jimi opened with great fanfare and performed the title track of his first album, “Are You Experienced.” Maybe I wasn’t experienced before, but I was then.

In the first set, Hendrix played such classics as “Purple Haze, Red House and the immortal ballad, Little Wing.” The first show was pretty short, but the impact was broad for my 11 year old mind. Eight songs closing with “Voodoo Child, (Slight Return).”

We decided to stay for the second show as they were not really clearing the hall. The second show was truncated to only two songs. I think Jimi was frustrated with the phalanx of Virginia Beach cops that lined up in front of the stage. He ended up breaking a guitar and left the stage, seemingly frustrated.

But that first set,where he broke no guitars and mainly played, was heaven for me. I was never the same. Bubble gum, spyder bikes and the trappings of childhood went away. I had to have a guitar after those Hendrix shows. Not the toy guitar I was playing. A real one.

Now almost 50 years, and many real guitars later, my fascination and love for the music of Jimi Hendrix continues. I have played, and continue to perform, many of his songs. Many guitarists, including me, have gone to the self motivated school for the study of Jimi Hendrix’s guitar playing. But no one has really graduated from that school yet.

Jimi Hendrix still matters because in a short amount of time, he changed the sonic and melodic vocabulary of the electric guitar. Like forefathers such as Charlie Christian, T-Bone Walker and Robert Johnson, among others, Jimi made the guitar his own personal soul communicator. All the more amazing is that Hendrix did not start playing until the age of 15. He died at the age of 27 in 1970. His professional career was a mere 7 years. With his guitar work and compositional genius, Hendrix changed the face of music, changed how the electric guitar could sound and inspired technology to be created to emulate his innovations. How did he do it?

First of all, this is not going to be a strict biographical article about his life. That has been done. This article will deal with his music and it’s impact on me. If you want to know more about the life of Jimi Hendrix, I recommend the two following books (Look for them in your local library)

One cannot fully encompass a subject’s life in an article or even in a series of books. The following are 11 points that need to understood about the life of Jimi Hendrix.

That was Jimi’s life in a stolen moment. Now let’s talk about the music. The root source of Jimi’s music was The Blues. Beginning with his father’s record collection, Jimi absorbed the music and lessons of such legends as Muddy Waters, B.B. King, Howlin‘ Wolf, Muddy Waters, John Lee Hooker and other Blues greats. In turn, during the course of his career, Hendrix sat in with B.B. King, Muddy Waters, Howlin‘ Wolf, John Lee Hooker, Albert King, and Buddy Guy. Some of Hendrix’s music touches on pre-Blues forms such as field hollers and early Gospel.

After leaving the army, Hendrix became a guitarist for hire for many of the R&B acts on the “Chitlin’ Circuit.” These artists included, but were not limited to, The Isley Brothers, Sam Cooke, Solomon Burke, Ike and Tina Turner, Little Richard and King Curtis.

Jimi’s time as a back-up R&B guitarist taught him to be a master rhythm player, a spot on soloist and a master showman. Invaluable training. Soul singer Wilson Pickett, who I played with for a time, recalled Hendrix fondly and said he knew he was going to be a star. Part of the reason Hendrix was such a dexterous player was his dedication and the size of his hands. His thumbs were as long as his index fingers. Playing left handed his thumb could bar across the neck to form chords and freed up his other four fingers to do many unique fingerings and chord voicings. Also, by being left handed playing a right handed guitar, the volume, tone, tremolo bar and toggle switch were close at hand for constant manipulation.

Hendrix loved Jazz and many Jazz musicians, such as Rahsaan Roland Kirk and Miles Davis, loved him. Miles Davis was especially astounded by Hendrix’s ability to play in advanced harmonic structures without being able to read music.

His early experiences jumping out of planes as a Paratrooper influenced his desire to simulate the sound of the wind and the hum of airplanes with his playing, among many sounds. His sonic palette was broad ranging, yet he always paid great attention to melody in the execution of his playing. His sound painting of the “Star Spangled Banner,”is one of the greatest solo guitar pieces of the 20th century.

As a singer, he was incredibly rhythmic. He was also very shy about his voice. Lyrically, he was influenced by Bob Dylan and by Science Fiction writers such as Phillip K. Dick. Go and read some of his lyrics for songs such as “Freedom, If Six Was Nine, Little Wing,” among many. Many of the songs hold up lyrically without the music. History will prove Jimi Hendrix to be one of the great composers of the 20th Century.

Ultimately, to me, Jimi Hendrix was more than a drug casualty as he has been portrayed. He liked drugs and was given more than his share by his manager Michael Jeffrey. But that is not the sum total of who Jimi Hendrix was. The most important thing was his music. The history of the electric guitar, for the past 50 years, is divided into two sections: Before Hendrix and after Hendrix. May he continue to rest in peace and innovation. I will always listen to the wisdom of Jimi Hendrix’s music.

My three favorite Jimi Hendrix youtube performances, plus one to grow on:

How The Fall Affected Animals