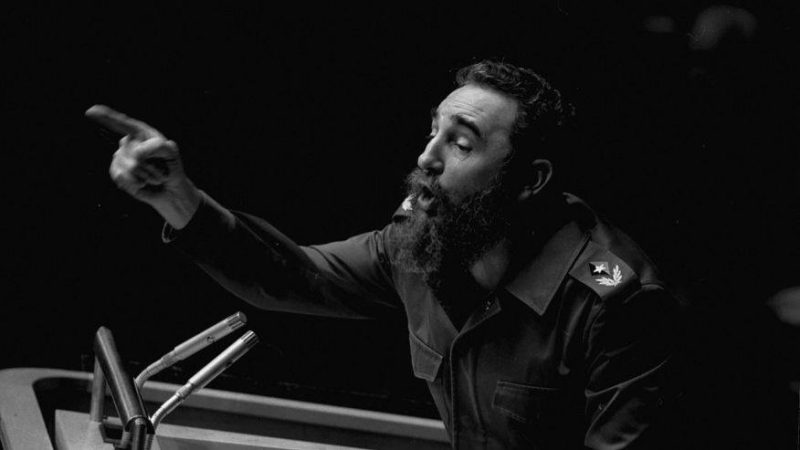 While the liberal media praises him, portrays him as a ‘romantic,’ and even compares him to George Washington, the evidence of the former Cuban dictator Fidel Castro’s bloodthirsty and murderous nature is unequivocal and available for anyone who wants to know the truth.

Sadly, American schools and mainstream media no longer teach the facts about this brutal dictator. Therefore, many grow up never realizing how horrible he truly was. So horrible –that countless Cuban citizens used everything possible to escape to the United States just to get away from him.

Here is a clip of journalists hailing Fidel Castro on MSNBC:

But Fidel Castro was certainly no inspirational leader like George Washington. In fact, he was more of a murderous, oppressive bully who reigned terror on Cuban citizens.

Beginning as a rebel, before he would eventually take power in Cuba, Fidel Castro used firing squad executions to enforce discipline, punish followers deemed disloyal or intimidate potential opposition. At the beginning of the Castro regime there was a reign of terror typical of revolutions in which the firing squad was used prominently but the executions continued for decades.

The Cuba Archive which documents deaths and disappearances resulting from Fidel Castro’s Cuban revolution has documented 3,615 firing squad executions conducted by the Cuban state since Castro took over on January 1, 1959.

In an interview with ABC News, Senator Ted Cruz responded to the news of Castro’s death:

“For so many of us whose families have been imprisoned, have been tortured, and have seen the destruction of Cuba that Fidel Castro carried out. My dad, as a teenager, was imprisoned and tortured by Batista. He was in a prison cell, he had his teeth kicked out of his mouth. My aunt Sonia, whom I adore fought in the counter-revolution against Castro. She and her two best friends in high school were thrown in prison and tortured as teenage girls. What they did to girls in Cuban prisons was unspeakable.”

“For a man who has tortured and oppressed so many, it is thankful that he is no longer with us.”

According to Babalú Blog:

“Opponents of the death penalty should be horrified at the amount of death Fidel Castro and his accomplices have directly caused. It’s important to note that in Revolutionary Cuba there are none of the due process guarantees found in a western-style democracy. Most of Castro’s firing squad victims were afforded only a perfunctory show trial the outcome of which was predetermined, some didn’t even get that. Ernesto “Ché” Guevara is a popular culture icon, his face adorns posters and t-shirts around the globe. Most people don’t realize that he was Fidel Castro’s chief enforcer and had a personal hand in at least 100 firing squad executions, often delivering the coup de grace personally. In response to questions about Castro’s firing squads Guevara once said, “To send men to the firing squad, judicial proof is unnecessary. These procedures are an archaic bourgeois detail. This is a revolution. And a revolutionary must become a cold killing machine motivated by pure hate.”

In addition to the firing squad executions 1,253 extrajudicial killings have been attributed to the Castro regime.

The Castro brothers have also used firing squads more recently. In the summer of 1989 the Castro regime arrested Cuban Army General Arnaldo Ochoa and several other officers. They were charged with drug trafficking. Within a few weeks Ochoa and three others were dead at the hands of a Castro firing squad. The trial was a farce in which Ochoa was forced to confess. Many believe the real crime committed by Ochoa and others charged was disloyalty since Cuba was a known transshipment point for illegal drugs for years and it is highly unlikely that the Castro brothers were unaware of it and not profiting from it.

In April 2003 Fidel Castro’s government executed 3 men who hijacked a ferry boat in an attempt to escape Cuba. They were sentenced to death and killed by firing squad less than two weeks after the alleged crime was committed.”

So, it’s no wonder Cuban exiles in Little Havana have been celebrating the death of this terrible Cuban tyrant. Unlike the U.S. media and ‘horribly oppressed’ football players like Colin Kaepernick, they (or their family members) actually had to live under Castro’s brutal dictatorship and understand the true horrors of it all: