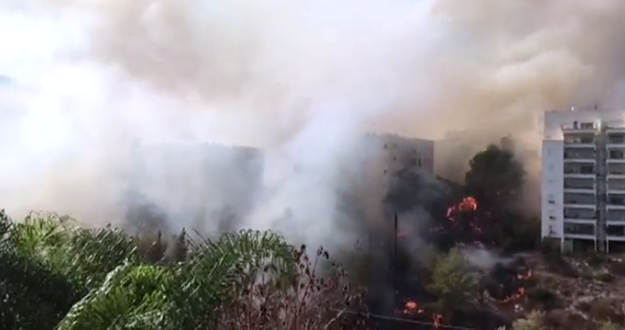 ISRAEL – This past week Israel has been engulfed by flames all over the country. From cities in the north of Israel, and in cities like Haifa, Modin, even reaching the Jerusalem hills.

Many of these fires were deemed acts of terror by 23 Palestinians which have been caught so far. There are reports stating that some of the fires were “wild fires” but the timing of the original arson act is suspicious.  One issue is that when the Palestinian Authority offered to “help” by sending firefighters in some of the regions of Israel, eyewitnesses reported that there was no water supply and that they seemed to be there mainly for propaganda reasons, something Palestinians are well known for.

Meanwhile, hatred of Israel has skyrocketed throughout social media.  Celebratory hashtags by the Arab media is perhaps causing more incitement to keep the fires going.

One interesting question to ask:  If this land belongs to the Palestinians as they claim, why set it on fire?

It is perhaps an act of God that no casualties have been reported. Thousands of Israelis were evacuated from their homes throughout the week, through Shabbat, and the fires are still ongoing.

One thing about Israelis, we look out for each other. Many Israelis have donated clothes, blankets, and other necessities. Some have opened their homes to the evacuated. We also appreciate the support we are receiving from outside countries, especially the prayers.

Please continue to pray for us, for the firefighters, and pray for rain since it has been reported it will be a few dry days.