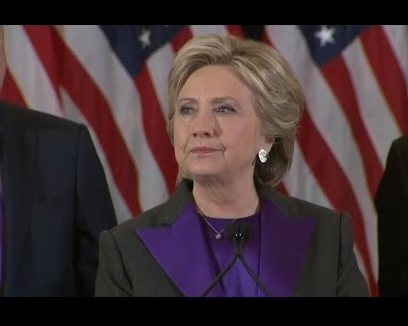 Hillary’s concession speech on Wednesday tendered a horrible lie: that we are a Constitutional Democracy. Now, I know many of you are romanced by the idea of democracies, of your being directly involved in the government and the nation listening to your wonderful opinion; but it is important for you to understand that our citizen involvement is limited—and for a very good reason.

Over 2,000 years ago, Plato explained the problem with democracies throughout history.   He wrote that the poor have always outnumbered the rich; that when you give the poor the same power as the rich, the poor will use their power of numbers to enact laws that cater to their desires and establish benefits—and use the government to take money and assets from the rich. This process has always driven the nation into financial ruin.

Our ruin is different in character. Crafty politicians have modified the process (and our government) so that we are not taking money from the rich—which would have immediate consequences. Instead, we are taking money from our future generations, from our children and our children’s children, so the politicians can deliver benefits in exchange for votes. So, our destruction is not in front of us, but it is hovering over our heads right now in the shape of a $20 trillion national debt—the largest debt in the history of mankind.

If we are such a “smart” society, why are we ignoring that monstrous debt?

The founding fathers studied politics throughout history and debated vigorously as they created our Constitutional Republic. Contrary to the political canards, our government was not designed to benefit its writers, maintain the class distinctions or to establish slavery. It was designed to be a limited government that gave states good powers, rewarded work, protected private property (from the coffee you are drinking to the house you own) and to ensure liberty.

The founders admitted from the beginning that the Constitution was imperfect. They knew that changes had to be made, so they included an amendment process that required votes far beyond a democratic majority to change our foundation of law. And, in another design to avoid democracy, the founders established the Electoral College, a system that had the states voting for the president instead of a popular vote across the nation. Without that institution, our elections would be decided by the voters within a few metropolitan areas while it ignored the opinions of most of the nation.

This brings us back to why Hillary called us a democracy.

This is key to understand: The Democrat Party’s only source of income and power ultimately comes political actions that are driving our nation into greater debt.

In a way, Hillary was partially correct in calling us a democracy. The initial design of the constitution gave voice to the popular emotions of the people in the House of Representatives, whose short, two-year terms would accommodate the changing opinions of the nation. The Senate held a longer term for its principled gentlemen, who were appointed by their state legislatures to represent the State interests.

But, during the late 1800’s, William Jennings Bryan and other Democrats spoke of how the republic wasn’t working because the excessive influence of the bankers and railroads was corrupting the Senate. They claimed that the people needed to appoint the Senators by popular vote, instead of the State Legislatures, as was specified by the Constitution.

In 1913 the Democrats got their wish: the 17th Amendment was ratified, which said, in part:

“The Senate of the United States shall be composed of two Senators from each state, elected by the people thereof, for six years…”

With this change, the States lost all their influence in the legislative processes of the federal government. The Senate was now a body that catered to the will of the majority; it was akin to another House of Representatives, but with more power over the Constitution and longer terms in office.

In the last fifty years the mutation from the 17th Amendment has seriously affected the design of the Constitution. Since the Senate is subject to the party system, the politicians use their confirmation powers to thwart any nominee whose philosophy obstructs their political design. Constitutional jurists, such as Miguel Estrada, have been labeled as “extremists” by the liberal faction and denied their chance to sit on courts of appeal because they would honor the Constitution’s intent.

We fully know now that the liberals do not want a republic. They want a democracy so they will be have no constitutional restraints on their spending an overactive government.

When the surprising death of Justice Anton Scalia opened a seat on SCOTUS, the liberals to sprang into action. They have been attempting to fill the vacancy with a liberal who would swing the majority over to the liberal faction’s side, but that nomination has been stopped by Senators who honor the Constitution.

And now, the last substantial foundation of our republican form of government is the Electoral College, which is also being attacked by the liberal faction.

We are horribly close to losing our republic, but the good news is that the election of Donald Trump promises to bring ethical constitutionalists to the nomination process. It also promises that after an eight year absence, the Executive may honor the Constitution’s order that the President “take care that the laws be faithfully executed.”

I wish to close this up with one final note from history. We are now seeing demonstrations against our President-Elect because people fear losing benefits from government. They don’t care about the debt; they want their money! About 500 years ago Niccolò Machiavelli wrote about this problem as well. He noted that throughout history, when people lose government benefits that they want, they have always rioted.

I just wanted you to know that these protests are only the beginning.