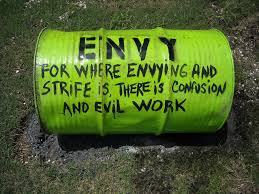 At first glance, Progressivism, the movement in which Barack Obama and Hillary Clinton proudly belong—appears to be so “cool” and “compassionate.” But as we delve a little deeper, we find that it is more of a bitter and resentful political machine built mostly of raw envy.

“I want what you have, and it makes me feel bad. So I’m going to take it from you, or at least knock you down to my size.”

And what our modern-day Progressive elitist friends envy most of all…is our all-powerful God in heaven. It does not take long to see that they want total control over everything He has created (including man and man’s innate ability to reason). The concept of our Creator’s omnipotence makes them feel bad. So, they ‘scheme up’ every con they can to steal that power and thwart free will from those who are made in His image… it’s no coincidence that they try to diminish God’s existence to the best of their ability.

Ultimately, Progressives want their bloated centralized government to be the only god, the giver of all man’s blessings, the solver of all problems, the dispenser of justice and mercy, the source of civilization’s progress. Sadly, the only “progress” that seems to occur under Progressivism—is the progression from freedom to slavery.

We can see this very phenomenon playing out with Obamacare where our ‘dear leaders’ have taken the control (of healthcare) out of the private sector–from individuals and their doctors– and placed it in the hands of government bureaucrats. There is absolutely no freedom in Obamacare—only rising premiums, tax penalties, complicated compliances, excessive regulations, and a morass of red tape in which doctors, small businesses, and individuals are forced to deal with on a daily basis.

But their lust doesn’t doesn’t stop with our healthcare. Progressives want complete command over all of our assets, our savings accounts and our businesses. And they don’t stop there. They want to control how we work, with whom we associate, our education, our faith, what we watch on TV, what we read on the internet, what we think, and how we love. They want control of our ambitions and our ‘pursuit of happiness.’

They want to own each one of us— our Creator’s most prized possessions.

Progressives are thieves who craftily disguise themselves as “champions of social justice”– in order to transfer more and more power over to themselves.

And, Of course, they can’t pull off their heist without a few good accomplices. So, how do you recruit millions of Americans to join in your Progressive-run larceny? Once again, it circles back to raw envy.

“It’s precisely the effect that Obama and Hillary seek. They seek to enlist a cadre of envious and resentful people to promote their pitch, and in academia, the media, and Hollywood, they have assembled it. They seek to recruit envious, resentful losers in the marketplace and convince them that they are being robbed and that they should feel good about participating in a political effort to transfer resources from more successful people to themselves. In other words, they want to remove people’s shame from being part of a theft and make them feel entitled to the fruits of it. These are the voters who sustain the progressive, Democratic coalition.”

As uncomfortable as it is to discuss, let’s just camp on envy for a little while longer.

“Envy is the drive which lies at the core of man’s life as a social being…Envy occurs as soon as two individuals become capable of mutual comparison…Schoeck also points out that, “Envy permeates all other vices, fueling greed and lust, stimulating anger, providing motive for covetousness and theft. In all the cultures of mankind in all proverbs and fairytales, the emotion of envy is condemned.”

However, in a book on deadly sins, Henry Fairlie explains that with other vices, such as anger, greed, and lust, we at least get some pleasure out of the emotion. But envy involves ill will toward another with no corresponding satisfaction for oneself. Envy is self-torment, and the only pleasure the envious person feels is the pleasure that some harm might come to someone else.

Envy is also often confused with jealousy, because both involve a loss of self-esteem that arises out of coveting something. While jealousy covets something that is actually ours by right, envy covets something to which we have no right whatsoever. Unlike a jealous man, the envious man is a thief because he seeks, without deserving it, what someone else legitimately possesses.

As Schoeck also points out, “There is very little discussion of envy in modern culture. In America today, there are lots of books on greed, but virtually none on envy. Professors are loath to raise the topic with their students. American high schools instruct students on how to avoid all kinds of unhealthy feelings and behaviors, but not envy.”

We rarely even hear church sermons on envy these days– yet the subject of greed is beaten like a dead horse (in which it should be, of course).

In reality, envy is a political and cultural taboo and NOT because it is rare. On the contrary, envy is taboo because it is pervasive among the very classes of people who don’t want to have the topic raised. This writer has experienced envy herself and doesn’t like to talk about this toxic emotion very much, either. But it is the poison that is pervading and destroying our very culture, so it’s time we get it all out on the table.

“Envy is also the most secretive of all human vices. Other vices, like greed and lust, are out in the open; it is in the nature of envy to hide. The envious man conceals his feelings so well that he does not admit them even to himself.”

Yet, the envious man seeks joy in the misery of others. He wants them to be at least as miserable as he is. That’s why we can see how envy is the root of Progressivism, socialism, communism, and Marxism.

Frequently, the resentment generated by envy, grows into hatred. And when money and success are involved, hatred often becomes, strangely enough, self-hatred. Why would the envious person who covets someone else’s money or success hate himself? The reason is that envy is an intellectual vice. Envy itself springs from a conundrum: why them and not me? Envy demands an exploration, and self- hatred is the result of that exploration.

We’ll hear demagogues like Hillary Clinton demonizing “the rich,” claiming they obtained their wealth by exploiting and stealing from the downtrodden. A perfect example is this ad below where Hillary talks about “reshuffling” the “income inequality”:

While the ad seems ‘upbeat’ and even ‘reasonable,’ what she is actually doing—is stirring up hatreds, stirring up and igniting dark passions within us. Progressives use these tactics to seduce us away from our inner dependency on God, and instead create a massive voting bloc of people dependent on them. And their scheme has been working beautifully for years. Sadly, their schemes steer us away from a sense of gratitude and toward a mentality of entitlement—which is very detrimental to ourselves and to our society.

In summation, Progressives probe the raw envy within each of us in order to broker power gains for themselves. It appears to be working quite well for them because they currently control academia, the media, the entertainment industry, and they largely control the megaphones that transmit political information to the American people.

Unfortunately, we are seeing its rotten fruits as it has infiltrated most institutions of our society. But who is really wants to talk about envy? Who is willing to do the work required to reclaim our Republic and restore our anti-theft society back to the way in which our Creator intended?

God can certainly make miracles happen if we put our faith in Him and allow Him to guide us.

Otherwise, as William Penn once stated,

“If man is not governed by God, he will be ruled by tyrants.”