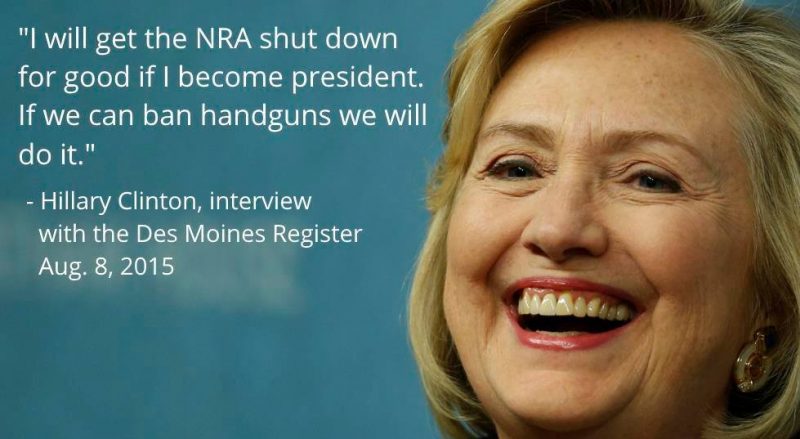 Hillary Clinton has repeatedly claimed that she’s not here “to take your guns away.” However, her campaign platform would go a long way toward stopping Americans from being able to buy some of the most popular firearms on the market.

“The former first lady is walking a fine line on guns as she tries to peel away independents and some Republicans from Donald Trump while also painting herself as a gun control champion. On the campaign trail Mrs. Clinton frequently calls for new gun safety measures as she reassures law-abiding Americans their firearms won’t be targeted under her would-be administration.

On several fronts, however, it’s clear a Clinton administration would result in much tougher gun laws, including some that would affect Americans with no criminal records. And critics such as Mr. Trump and powerful gun rights groups fear Mrs. Clinton would reshape the Supreme Court by appointing justices much more hostile to Second Amendment freedoms.

While many Democrats long have been labeled as anti-gun, firearms advocates say Mrs. Clinton’s position is especially disingenuous.

“This is an outright and outrageous lie that [Mrs. Clinton] doesn’t want to take people’s guns,” said Dudley Brown, president of the National Association for Gun Rights. “Hillary Clinton has made a career of restricting citizens’ Second Amendment rights and trying to ban, outright ban, entire classes of firearms. And if that’s not taking guns then I don’t know what is. All you have to do is pay a little bit of attention.”

Mrs. Clinton’s platform calls for an expansion of background checks for all firearms purchases. She’s also called for a reinstatement of the national assault weapons ban and a prohibition on high-capacity magazines.

The former secretary of state also is a staunch supporter of the so-called “no fly, no buy” proposal that would stop anyone on federal terrorist watch lists from buying guns. The plan has been rejected by civil liberties advocates who say such a ban — which would apply to Americans who haven’t been charged with a crime but merely are on the government’s radar — is a blatant violation of due process rights.

While running for U.S. Senate in 2000, Mrs. Clinton also supported legislation that would’ve established a national federal registry for all guns — though such an idea doesn’t appear to be part of her 2016 presidential platform.

The Clinton campaign did not respond to a request for comment.

In addition, Mrs. Clinton has supported raising the legal age for all handgun ownership to 21. Current law allows anyone over the age of 18 to own a handgun, though licensed dealers can only sell to those over 21 years of age.

For her part, Mrs. Clinton stresses that she’s well acquainted with the cultural importance of guns and has pointed to her own history in rural America.

“I lived in Arkansas for 18 wonderful years. I represented upstate New York. I understand and respect the tradition of gun ownership. It goes back to the founding of our country,” she said at last week’s debate. “But I also believe that there can be and must be reasonable regulation. Because I support the Second Amendment doesn’t mean that I want people who shouldn’t have guns to be able to threaten you, kill you or members of your family.”

Meanwhile, the NRA has been running a very popular ad starring Dana Loesch, explaining how millions of women and moms are actually willing to use a firearm to defend their families:

What Is the Number One Assassin of the American Dream?