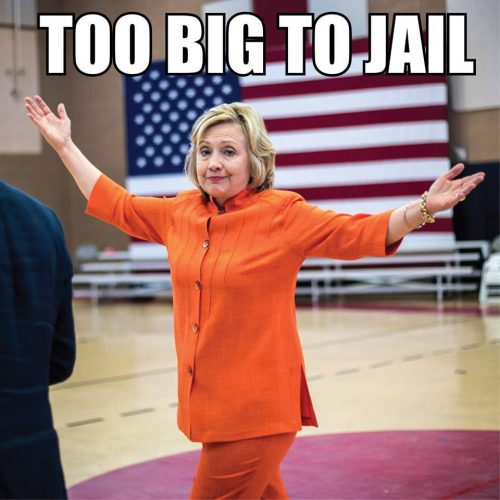 Hillary Clinton may have been right in her smug attitude that she is simply too big to jail  in spite of Donald Trump’s enthusiastic presidential campaign mantra to “lock her up!”

President-elect Donald Trump said Tuesday that he won’t pursue criminal charges against Hillary Clinton because it would divide the nation — and she’s already “suffered greatly.”

Trump told the New York Times in an interview:

“I don’t want to hurt the Clintons — I really don’t. She went through a lot and suffered greatly in many different ways.”

In an interview with Fox News, Kellyanne Conway also stated:

“Donald Trump will not charge Hillary Clinton but will HELP her HEAL instead.”

But his decision isn’t sitting well with everyone, including many of his supporters. His conciliatory gesture to Clinton is a sharp contrast to a key plank of his winning campaign message after all.

At the second presidential debate in October, Trump told his rival:

“If I win, I am going to instruct my attorney general to get a special prosecutor to look into your situation because there has never been so many lies, so much deception.”

Throughout her unsuccessful presidential bid, Clinton was dogged by an FBI probe of her handling of classified information on her private e-mail server.

Trump was often met at campaign rallies with enthusiastic chants by his supporters of “Lock her up!”

Trump even said when the crowd began the chant at an Oct. 10 rally:

“If I win, we’re going to appoint a special prosecutor . . . Because we cannot allow this to happen in our country.”

Now that Donald Trump has won the election, has he had a complete change of heart toward his former rival Hillary Clinton and her email scandal?

And what ever happened to the rule of law? Does he now also agree with Hillary Clinton –that she is above the law after all?

Even Ann Coulter, one of Trump’s staunchest supporters, is not happy about his latest decision. After the announcement to not pursue Hillary’s email scandal, she tweeted:

“As happy as I am that our long national nightmare’s over, NO president shld be blocking investigators from doing their jobs.”

“If #Trump does not do exactly what he said, he will be a man without a country. Follow through OR ELSE. Donald J. Trump Kellyanne Conway”

Broken promises or simply letting ‘bygones be bygones’ in spite of the rule of law? Perhaps, he believes that Hillary Clinton losing the election was punishment enough for her. As much of a shock as her defeat came to just about everyone, perhaps it really was?

What do you think? Is it time to simply forget about the Clinton’s altogether and just move forward with Trump’s Pro-America agenda? Or do you think the rule of law should still be upheld in spite of the circumstances? Are we going to be a nation of whims or a nation of laws?