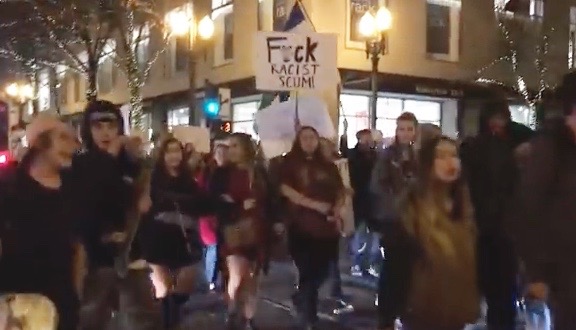 If I am to believe the mainstream media, Donald Trump owes his Presidential Election victory to a bunch of uneducated voters. To be more specific, uneducated white racist voters. Therefore, according to them and those of a similar mindset, protests against the Election results are warranted because in their utter stupidity, the less educated amongst us elected a psychopath to serve as President. Consequently, this means the votes of the less enlightened really aren’t legitimate and it is the duty of the intellectual elite to protect this country from the ignorance displayed by everyone who voted for Donald Trump?

I must admit I fall into the idiot category. I forgot: Educated people in their early twenties always know more than non-educated people. Knowledge can only be acquired if one is a product of the current educational system in the United States. I wasn’t fortunate enough to have Common Core. I you are age 45 and above, you have no idea what you are doing. Instead of recklessly walking into the voting booth and casting ballots for unqualified candidates you need to get off your tail and talk to a student currently enrolled in college.

Despite having lived twice as long as the average college student, I missed the boat when it came to wisdom. I need their guidance. I’m sure it would irritate the typical Trump protestor, but I would appreciate it if they would take the time to write some essays. The public school system failed me horribly when it came to civics. I need answers.

There are things about our country I don’t understand. I’m sure many of you are in the same boat as myself. Therefore I have developed a list of questions that any Trump protestor should be able to answer:

1) What is suffrage and how does it apply to voters? Do you think suffrage is morally wrong?

2) Is it fair to disenfranchise deceased voters? Don’t their contributions to America warrant better treatment?

3) What’s the difference between a Democracy and a Republic?

5) What is sedition? When is it warranted? Has Donald Trump abused his powers as President-elect?

6) What rights are guaranteed to illegal immigrants in the Constitution? Does Trump propose to ignore those rights?

7) How does the presence of illegal immigrants lower the unemployment rate?

8) Describe the sacrifices has Hillary Clinton made on behalf of civil rights? Also, why didn’t you attend any of her rallies?

9) Trump has been denounced as a Fascist? What is a Fascist? Should we be scared of Trump? How do you reconcile the need to ban firearms with your belief an oppressive regime is about to begin? Should law enforcement be allowed to carry firearms? What about our armed forces?

10) When is it ok to ignore the results of a Presidential Election that produced an uncontested winner? Does it establish dangerous precedent or is it in the best interests of a free society to simply ignore election results every once in a while?

I seriously doubt you would find many young Americans who would know how to answer most of or even any of those questions. The entire ‘uneducated’ Trump voter argument is baseless. The notion that Trump protestors are intellectually superior is total nonsense. The very act of protesting the election result demonstrates a basic unfamiliarity with the ideals upon which our country was built.

This protest movement involves individuals who would actually cheer and celebrate if the valid results of an Election were overturned. This would appease people who feel Trump’s Election represents a miscarriage of justice. It’s hard to comprehend, but they actually believe if you elect a person who holds controversial views, it’s grounds to disqualify the results. Have they even bothered to consider what that means and how it threatens freedom?

The United States is a Republic. This means that we elect people to represent us. In theory these people should vote according to our wishes. We aren’t a true democracy because everyone doesn’t get a vote on everything. If that were the case, the majority would always overrule the minority. People can complain all they want about the popular vote, but the same concept represented by the Electoral College also made it possible to enact Civil Rights legislation.

The most sacred right we have as Americans is the 1st Amendment which guarantees freedom of speech and the right to assemble. While I might view Trump protestors as misguided, I do recognize the importance of the right to free assembly and free speech. At present things haven’t turned violent but that could change very easily. Further, the mainstream media, enraged that Trump won despite all their efforts to defeat him, has only intensified their vendetta against him and made the protestors feel empowered and morally justified.

Suppose the situation gets out of control?  This will force an unwanted debate on the limitations of free speech. It’s one thing to protest and yell terrible things about Trump. It’s another matter entirely to encourage active opposition to the functioning of government. Just like any right, free speech can be abused. At what point is the line between free expression and treason crossed? It’s one thing to hate Trump the individual. However, this man is about to become President and no matter how much you hate him personally, the Office he holds demands respect and the Office holder must be allowed to operate without unnecessary obstructions. Once he takes Office, the bitter vitriol directed against Trump the man will by default also be directed at the Office of President of the United States! Even the most benign duties and acts of President Trump will create unprecedented issues if things keep going in the current direction. If he invites the Super Bowl champions to the White House, will they refuse to go? Will the team members that do go be labeled racists?

Treason is an incredibly serious issue. I don’t take it lightly, but if people actively try to keep Trump from carrying out his duties as President or make it impossible for him to function without serious opposition at every turn, I fear we could be dealing with overt treason. At what point does the Press become a subversive group? They are getting more and more reckless and at some point I can envision them exciting a riot…they are getting dangerously close. Moreover, it’s one thing to single out a single private citizen and unmercifully criticize and bash them hourly. However, if that individual becomes President, the unrelenting attacks have transformed into something far more serious. Like any elected official, it’s the duty of the Press and it’s our right as citizens to criticize the President. There’s nothing wrong with that. It’s another matter entirely to carry out an over the top hate campaign against a sitting President.

Do any of these individuals realize their protests could become a self-fulfilling prophecy?

Do any of them know what the imposition of martial law means? Do any of them realize everything martial law entails? Enough is enough. At some point common sense has to prevail. At least give the man a chance to govern. If he grossly abuses his power, there are Constitutional remedies to that situation. It doesn’t need to come to this. Whatever moral high ground Trump protestors feel they have is greatly overshadowed by the larger issue of loyalty. You can’t simultaneously preach about the freedoms we have as Americans and at the same time hold the view that a duly elected President has no right to govern. We have a leader for the next four years. His name is Trump and if you are an American citizen he IS your President. If you reject this reality, you are saying you oppose the leader of your country. If you oppose this country’s leadership, what does that make you?