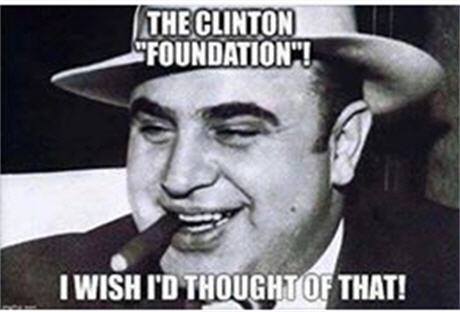 For over a year, the FBI has been investigating the Clinton Foundation for potential financial crimes and influence peddling.

“The manner in which the State Department was put in the service of the Foundation during Hillary Clinton’s tenure as secretary is shocking. It is suggestive of a pattern of pay-to-play bribery, the monetizing of political influence, fraud, and obstruction of justice that the Justice Department should be investigating as a possible RICO conspiracy under the federal anti-racketeering laws.”

Hillary Clinton appears to have used her official powers to do favors for major Clinton Foundation donors.

McCarthy also points to how the Journal’s Devlin Barrett buries the Clinton Foundation lede in the 14th paragraph of his report, but reveals a great deal in his final three paragraphs:

“In September, agents on the foundation case asked to see the emails contained on nongovernment laptops that had been searched as part of the Clinton email case, but that request was rejected by prosecutors at the Eastern District of New York, in Brooklyn. Those emails were given to the FBI based on grants of partial immunity and limited-use agreements, meaning agents could only use them for the purpose of investigating possible mishandling of classified information.

Some FBI agents were dissatisfied with that answer, and asked for permission to make a similar request to federal prosecutors in Manhattan, according to people familiar with the matter. [FBI Deputy Director Andrew] McCabe, these people said, told them no and added that they couldn’t “go prosecutor-shopping.”

Not long after that discussion, FBI agents informed the bureau’s leaders about the Weiner laptop, prompting Mr. Comey’s disclosure to Congress and setting off the furor that promises to consume the final days of a tumultuous campaign.”

“When we learn that Clinton Foundation investigators are being denied access to patently relevant evidence by federal prosecutors in Brooklyn, those are the prosecutors — Loretta Lynch’s prosecutors — we are talking about.

Recall, moreover, that it was Lynch’s Justice Department that:

As McCarthy has detailed, It was already clear that Lynch’s Justice Department was stunningly derelict in hamstringing the bureau’s e-mails investigation. But now that we know the FBI was simultaneously investigating the Clinton Foundation yet being denied access to the Clinton e-mails, the dereliction appears unconscionable. It had to be screamingly obvious that the Clinton State Department e-mails, run through a server that also supported Clinton Foundation activities, would be critically important to any probe of the Foundation.”

He believes what is actually essential is that the FBI’s Clinton Foundation investigators get access to all the thousands of Clinton e-mails, including those recovered from the Mills and Samuelson laptops. The agents must also have the time they need to piece together all the Clinton e-mails (from whatever source), follow up leads, and make their case.

To read more of McCarthy’s assessment, go to National Review

The bottom line is this: Hillary Clinton hasn’t even been elected as president yet and Americans are already tired of her scandals.

Andrew C. McCarthy: "Is the Abedin/Weiner Laptop the Last of It?"