Trump is shaking Obama’s hand on the fuzzy screen of the big television hanging precariously over an empty barbershop chair. 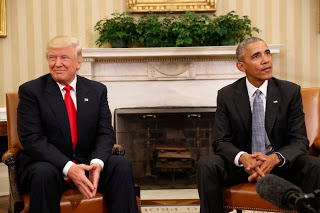 It’s a hot day outside. The limp flag of the barbershop hangs low. Inside a circle of black and Latino men peer up at the television and shake their heads. “Sheeit,” one says, dragging the sound out.

It’s not hostile. It’s as much wonderment as anything else. Like the rest of us, they are seeing the impossible.

“It’s like a miracle,” another says. “I stayed up all night and I couldn’t believe it.”

The noise of three barbers, black men working their trade in the second most hallowed neighborhood institution after the Baptist church, makes it hard to hear what Obama and Trump are saying to each other.

Despite the best efforts of the Democratic Party machine, there’s no hostility toward Trump here. There’s bafflement, amusement and respect. “Sick” is a common term of approbation for him.

The media had sought to depict Trump’s birth certificate comments as racist, but few here buy that.

There’s nothing personal about it. Trump did what he had to do to win. Just like they do what they have to do. The election was a rap battle where you can say anything you want about the other guy, but it doesn’t matter. It’s just machismo and bravado. It’s a game. Trump was a player. And they’re not gonna be playa haters. Even if it’s the biggest game in the world.

Trump and Obama compliment each other in a scene that strikes much of the country as surreal. But not at the barbershop.

“When it’s out there, they fighting. When it’s just the two of them, they good,” one says.

“They gonna smoke a blunt together,” another says and laughs.

There’s a holographic picture of Obama at his first inauguration on the wall. When you tilt your head, he almost seems to be coming out of it. Next to him is an old black and white of Martin Luther King. To reflect the neighborhood’s changing demographics, there’s another one of the Lubavitcher Rebbe, one of Caesar Chavez and an Asian man in a khaki suit that I can’t even begin to identify.

The live Obama on the television looks old and shrunken compared to his holographic doppleganger. Like today’s Bill Clinton, you wonder that he ever seemed so vital a nemesis once upon a time.

Obama is still an icon in the black community. He’s the first black president. But nobody here expected that to last forever. They still like him and his picture will hang on walls for generations.

But they’re also moving on.

Trump is the kind of Republican they can understand and respect. “We need money,” one man chants. “We don’t wanna be on welfare. We want the money.”

A barber takes a call while working on a customer. “Gotta get that money,” he says apologetically.

The Koch Brothers flavor of free market education would fall flat here. But Trump’s kind of capitalism they can get behind.

“He’s got his own plane. He’s got an air force,” a customer observes.

“If I were a billionaire, I’d be an asshole too,” says another.

Trump thanks Obama. The event wraps up. “That’s all,” Obama tells the press.

The media tried to get men like this to hate Trump. But black turnout lagged. At the barbershop they don’t hate Trump. They didn’t vote for him, but they respect him. They want to pull together now.

They want the country fixed and made right again.

The violent freeway protests, the shutdowns and fires, the vandalized police cars, baffle them. “What are they trying to do?” they wonder.

The left has lost nationally. But its grip even in places like this was always shaky. The left excelled at manipulation. It played on grievances and offered freebies. But there’s a hard ambition here and a culture that the left never had a grip on. The barbershop is one of the more conservative outposts of the black community, but it’ll never fly the elephant or vote GOP. But it has much more culturally in common with Trump and his voters than it does with the left that waged war against him.

Black culture has been crippled and twisted, but it’s still about ambition and achievement. The left has seduced the black community, but it doesn’t truly understand it or control it.