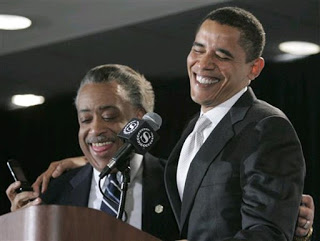 In Dallas, Obama mentioned the name of dead sex offender Alton Sterling more times than those of the murdered police officers whom he was pretending to memorialize. After quickly dispensing with the formalities of eulogizing the slain officers, Obama demanded that “even those who dislike the phrase ‘black lives matter’” should “be able to hear the pain of Alton Sterling’s family”.

Alton Sterling was a convicted sex offender, burglar and violent criminal who was shot while reaching for a gun. His family may mourn him, just as every criminal’s family mourns their own, but it was obscene to class him together with five police officers who were murdered by a violent racist while doing their duty.

It is even more obscene when Obama’s favorite sex offender displaces the murdered police officers.

And yet that was Obama’s theme in Dallas. Murdered police officers were contrasted with dead criminals. The proper thing for Americans to do, as Obama told us, was to mourn both officers and criminals, to respect the sacrifices of the police and the anti-police accusations of #BlackLivesMatter.

Obama did not come to Dallas to mourn the murdered police officers, but to defend the ideology that took their lives. And this is what he has done from the very beginning.

Before the shootings, Obama expressed his “condolences for the families of Alton Sterling and Philando Castile” and insisted that the criminal justice system was racist. His statements and speeches after the shootings echoed the same talking points and spin complete with the claims that accusing the police of racism is “not to be against law enforcement”.

That’s true. Black Lives Matter doesn’t mean that blue lives don’t matter. It means that blue lives are evil. As Ta-Nehisi Coates, an author on Obama’s reading list, wrote of the dead police officers who gave their lives on September 11, “They were not human to me.” That’s the kindest thing that the black nationalists whose cause Obama has championed have said of the police.

In a more recent article titled, “The Near Certainty of Anti-Police Violence”, the MacArthur Genius Grant recipient and son of a Black Panther suggests that black resentment of police makes their murder predictable.

It’s the core black nationalist message made more palatable for liberal audiences. Underneath the word games, the attempt to treat the ideological justifications for the mass murder of police as inevitable, is the same message delivered by Ismaaiyl Abdullah Brinsley, the #BlackLivesMatter supporter who assassinated two NYPD officers, who had posted, “They take 1 of ours…Let’s take 2 of theirs”. Obama’s message was even more polished than Coates, but not really so very different. Coates had polished up the radical black nationalist message for liberal audiences. Obama’s speechwriters shaped his for a national audience. But underneath the religiosity and praise of the police was sheer contempt.

In one of the nastily cynical moments, Obama claimed that “to honor these five outstanding officers who we lost” we would have to act on “uncomfortable” truths such as his claim that the police are racist. “Insisting we do better to root out racial bias is not an attack on cops, but an effort to live up to our highest ideals,” he spun.

While the media applauded his “healing”, Obama was just recycling his speeches from before the Dallas shooting. The talking points had not changed. They had only been moved around a little to exploit the police officers murdered by a #BlackLivesMatter supporter in order to promote #BlackLivesMatter.

Indeed this had always been Obama’s first and foremost priority.

After the shooting, his initial response was to emphasize that the anti-police protests were “peaceful”. At Dallas, in his praise of the police officers, he insisted on inserting that same description of a “peaceful” protest “in response to the killing of Alton Sterling of Baton Rouge and Philando Castile of Minnesota”. The choice of words, ‘killing’ rather than ‘death’, is significant.

The “shootings in Minnesota and Baton Rouge” were equated with the murders of police officers in Dallas in a breathtaking bit of moral equivalence. Americans were encouraged to grieve for sex offender Alton Sterling and the murdered police officers at the same time. And, just in case there was any ambiguity about which side he was on, Obama warned that “we cannot simply turn away and dismiss those in peaceful protest as troublemakers or paranoid.”

It was a defense of #BlackLivesMatter at a memorial for their victims.

Obama’s spin was that he was calling for unity when in reality he was pushing the divisive agenda of the hate group whose rhetoric helped lead to the killings. He was not a healer, but an arsonist.

There was nothing unifying about his exploitation of a memorial service to push anti-cop messages or to call for gun control. Neither message is in any way, shape or form unifying. They are as divisive as can be.

Obama did not come to Dallas to mourn, to heal or to unify. His sole purpose was to protect his #BlackLivesMatter hate group from the consequences of its rhetoric. Americans were fed lies about peaceful protests featuring armed members of hate groups who had called for the murder of police.

#BlackLivesMatter draws its inspiration from a cop-killer. It has deliberately targeted white people in much the same fashion that Micah X. Johnson did. The only real difference between Johnson and the black nationalist hate groups frantically trying to distance themselves from him in much the same way that mosques do from the latest Islamic terrorist is that he followed through on a lot of their rhetoric.

Johnson was not trying to get a job writing Black Panther comics or making YouTube videos. He actually did the sort of thing that #BlackLivesMatter role models like Assata Shakur did. He killed police officers.

For Obama, Dallas was a bump in the black nationalist road. It was, like every Islamic terrorist attack, an unfortunate incident from which we shouldn’t draw any conclusions, except perhaps that guns are bad. The goal is to redirect our attention to the next set of #BlackLivesMatter protests or the next celebrity tweeting about gun control and how mean those men with guns who aren’t on their payroll are.

He did not come to Dallas to praise the dead, but to enlist them in the service of his anti-police agenda.

Not only had Obama’s actions led to the murder of police officers, but he was determined to whitewash their deaths and exploit them as weapons in his war against the police.

The Greatest Song You'll Hear All Year: "What Difference Does It Make"