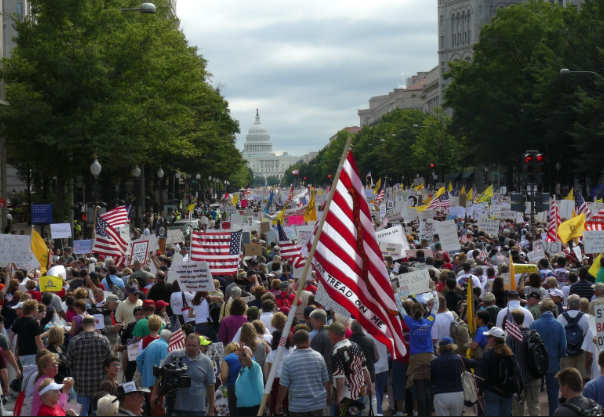 (This article first appeared at Front Page Magazine during the night of the election.)

This wasn’t an election. It was a revolution.

It’s midnight in America. The day before fifty million Americans got up and stood in front of the great iron wheel that had been grinding them down. They stood there even though the media told them it was useless. They took their stand even while all the chattering classes laughed and taunted them.

They held up their hands and the great iron wheel stopped.

The Great Blue Wall crumbled. The impossible states fell one by one. Ohio. Wisconsin. Pennsylvania. Iowa. The white working class that had been overlooked and trampled on for so long got to its feet. It rose up against its oppressors and the rest of the nation, from coast to coast, rose up with it.

They fought and they won.

This wasn’t a vote. It was an uprising. Like the ordinary men chipping away at the Berlin Wall, they tore down an unnatural thing that had towered over them. And as they watched it fall, they marveled at how weak and fragile it had always been. And how much stronger they were than they had ever known.

Who were these people? They were leftovers and flyover country. They didn’t have bachelor degrees and had never set foot in a Starbucks. They were the white working class. They didn’t talk right or think right. They had the wrong ideas, the wrong clothes and the ridiculous idea that they still mattered.

They were wrong about everything. Illegal immigration? Everyone knew it was here to stay. Black Lives Matter? The new civil rights movement. Manufacturing? As dead as the dodo. Banning Muslims? What kind of bigot even thinks that way? Love wins. Marriage loses. The future belongs to the urban metrosexual and his dot com, not the guy who used to have a good job before it went to China or Mexico.

They couldn’t change anything. A thousand politicians and pundits had talked of getting them to adapt to the inevitable future. Instead they got in their pickup trucks and drove out to vote.

And they changed everything.

Barack Hussein Obama boasted that he had changed America. A billion regulations, a million immigrants, a hundred thousand lies and it was no longer your America. It was his.

He was JFK and FDR rolled into one. He told us that his version of history was right and inevitable.

And they voted and left him in the dust. They walked past him and they didn’t listen. He had come to campaign to where they still cling to their guns and their bibles. He came to plead for his legacy.

Fifty millions Americans repudiated him. They repudiated the Obamas and the Clintons. They ignored the celebrities. They paid no attention to the media. They voted because they believed in the impossible. And their dedication made the impossible happen.

Americans were told that walls couldn’t be built and factories couldn’t be opened. That treaties couldn’t be unsigned and wars couldn’t be won. It was impossible to ban Muslim terrorists from coming to America or to deport the illegal aliens turning towns and cities into gangland territories.

It was all impossible. And fifty million Americans did the impossible. They turned the world upside down.

It’s midnight in America. CNN is weeping. MSNBC is wailing. ABC calls it a tantrum. NBC damns it. It wasn’t supposed to happen. The same machine that crushed the American people for two straight terms, the mass of government, corporations and non-profits that ran the country, was set to win.

Instead the people stood in front of the machine. They blocked it with their bodies. They went to vote even though the polls told them it was useless. They mailed in their absentee ballots even while Hillary Clinton was planning her fireworks victory celebration. They looked at the empty factories and barren farms. They drove through the early cold. They waited in line. They came home to their children to tell them that they had done their best for their future. They bet on America. And they won.

They won improbably. And they won amazingly.

And they stood up and fought back. This was their last hope. Their last chance to be heard.

The media had the election wrong all along. This wasn’t about personalities. It was about the impersonal. It was about fifty million people whose names no one except a server will ever know fighting back. It was about the homeless woman guarding Trump’s star. It was about the lost Democrats searching for someone to represent them in Ohio and Pennsylvania. It was about the union men who nodded along when the organizers told them how to vote, but who refused to sell out their futures.

No one will ever interview all those men and women. We will never see all their faces. But they are us and we are them. They came to the aid of a nation in peril. They did what real Americans have always done. They did the impossible.

America is a nation of impossibilities. We exist because our forefathers did not take no for an answer. Not from kings or tyrants. Not from the elites who told them that it couldn’t be done.

The day when we stop being able to pull off the impossible is the day that America will cease to exist.

Today is not that day. Today fifty million Americans did the impossible.

Midnight has passed. A new day has come. And everything is about to change.

Brexit Leader Nigel Farage: "2016 Is the Year of Political Revolution"

Dionne Alexander to Liberals: You're the Reason Donald Trump Won the Election