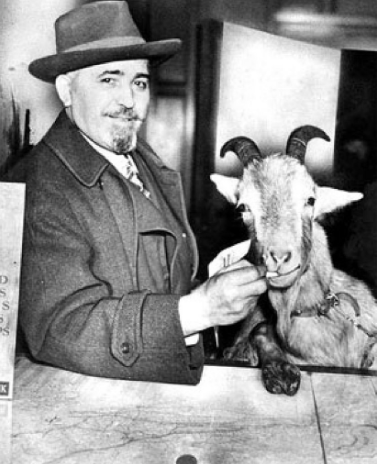 The Curse of the Billy Goat is over; that is, if you’re superstitious.

The story goes that, William Sianis, then owner of the Billy Goat Tavern in Chicago took his pet goat to game 4 of the 1945 World Series, but when the goat’s odor became too strong for the fans, Sianis was asked to leave. He was furious and avowed, “Them Cubs, they ain’t gonna win no more.” Since then, fans have taken that to mean the Cubs would never win the National League pennant, or they would never again win a World Series, thus the Curse of the Billy Goat.

The Cubs had not won the National League pennant in 71 years, and emotions ran high last night when the Cubs won the World Series in the 10th inning for the first time since 1908.

Last night’s win over the Cleveland Indians was a thrilling game——drama, then rain. What more could we expect from a World Series game?!

By the way, the Cubs also won the World Series in 1907 – back to back wins.   Maybe last night’s win is a good sign for all patriotic Americans as we head into Election Day on Tuesday.

Watch HERE for a quick recap.