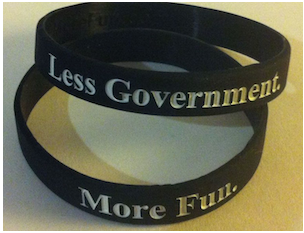 For our Wednesday “PolitiChicks Stocking Stuffers Giveaway” we asked our readers the question, “Why is less government more fun?”

All of the answers were really good, including this one from Dale Parker in Colorado:

“The hardy freedom seeking people who first came to this continent to settle and wrestle a life and a future from the harsh and forbidding land were bound to form a “body politic” in order to survive. The dangers and risks were many and far more serious than most people today will ever encounter. Out of these early beginnings came a people who grew to love freedom in a manner and form that had not been seen in Europe for centuries.

These people were not just individualists, innovators, risk takers and explorers. They were God fearing as a whole and understood that any government that they would form had to be based on His principles and the framework of His word. They understood that mankind’s wisdom and achievement was nothing alongside that of a God who spoke this world into being out of nothing.

Looking to God for a framework and wisdom was the single greatest achievement of our founding fathers. In doing so they not only secured a government that was vastly different from anything forged on man’s anvil but they acknowledged that ultimately governments belong to He who created them. Our founding fathers understood that the government..the republic..that they worked so hard on was to provide a limited government by man and an unlimited government by God. As we surrender power and liberty to man we lose the love, the order, and the freedom that comes with obedience to God. As John Adams said…“Our Constitution was made only for a moral and religious people. It is wholly inadequate to the government of any other.”

And from Doug Willoughby:

“It is hard to imagine what it would be like to live under a totalitarian regime. Anni Cyrus has, and she once related that it is illegal for a woman to sing a solo in public. The reasoning is that a woman’s voice is seductive and a her song will lead men to sin. Iran’s Islamic government controls almost every aspect of it’s citizens lives.

We do not have such a regime in America, yet. It is not for a lack of trying. In New York City and in Washington,D.C., hefty fines of up to a quarter million dollars can be assessed for addessing someone by other than their preferred pronoun. And let us not forget the Bloomberg Big Gulp-Slurpee ban of 2012.

Wisconsinites think such things are crazy. Unfortunately, nine people in black robes could have spread this nonsense even to Cow Country. My hope is that this election will reverse the dark cloud of Liberal contol over people’s lives.

So, while I can, I am going to wish everybody a “Merry Christmas” and l am going to listen to Karen Carpenter sing “Chestnuts roasting on an open fire……”

But we chose Kathy Ponce as the winner because as a citizen living in crazy California, she saw what too much government was doing to her own community. Kathy did the very thing all of us at PolitiChicks encourage everyone to do–she got involved and is currently fighting to make a difference.

Appropriately Kathy will be receiving some goodies from our friends at LessGovernmentMoreFun.com and two Hydaway Bottles.

And if you haven’t won yet, we’ll have four more weeks of prizes to give away every Monday, Wednesday, and Friday until December 23!

Why we, or should I say I, need Less Government and more FUN.

For the past 2 years it seems as though Obama and his administration have been on steroids with implementing actions. And living in California, with all their crazy agendas and Obama’s crazy agenda, I have had little to no life…let me explain.

Why I need Less Government and MORE FUN!!!!

I have only had date nights with my City Council members due to Obama trying to implement his AFFH housing agenda…Affirmatively Furthering Fair Housing Act. I have had to meet with my Council members on a regular basis to keep them updated with the continuous executive actions in this area so they would not take grant money and sell our city out to the Federal government.

I have had to email, write, call and visit my City Manager on a regular basis to help educate him and remind him that taking Grant money does not come free….that there are stipulations to taking so-called free money. However, before these meetings I have had to study the type of grants my City manager was going to take so I could educate him….sound like FUN? No, it was like doing government homework nearly every night..

I have attended meeting after meeting to keep an eye on the local elected officials.

Every Tuesday night you would find me at either the City Council meeting or my cities Planning Commission meeting…Sound FUN Yet?

With less government we would be able to run our cities the way we, the People, want to have our cities ran…not the way the State and federal government tells us too…

LESS GOVERNMENT AND MORE FUN….The moto I will live by..

Daniel Greenfield: A Tiny Minority of a Million Muslims in America