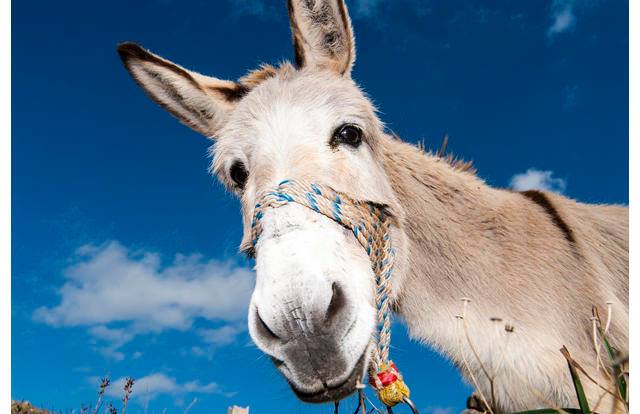 Hillary Clinton’s major loss to Donald Trump last Tuesday night not only revealed her campaign’s failure to read the American people, it also exposed the fact that the Democratic ticket has been in remarkable decline since Obama took office.

The Democratic bench was already in a sorry state, but the situation just got much worse last week.

“Think of a political party like an Army. To have effective generals, you need to bring leaders up through the ranks. If everyone keeps getting killed off on the first Tuesday after the first Monday of any given November, you’re not going to be able to win many battles. The Democrats gained two Senate seats — in a year that it was long assumed they would regain control of the chamber.”

Two patterns to note. The first is that the Democrats surged into power in 2006 and 2008, winning seats in elections that would normally have leaned to the Republicans. So some of the losses since 2008 are a function of reversion to norm, light-red areas going red once again. The second is that federal and state races largely correlate. A good year for the GOP nationally tends to make a good year at all levels.

It can be hard to see the extent to which the Democratic collapse has occurred. Here is the percentage change in each case since 2008: 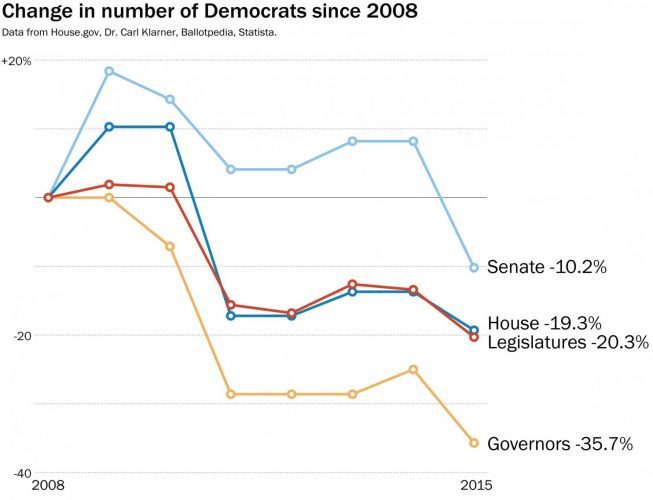 The Washington Post also explains:
“We tend to focus on the loss of the presidency as the example of Democratic failure. That’s blinkered. Since 2008, by our estimates, the party has shed 870 legislators and leaders at the state and federal levels — and that estimate may be on the low side. As Donald Trump might put it, that’s decimation times 50.”

Since 2008, this is what the Democratic decimation has looked like. (Data sources from House.gov, Dr. Carl Klarner) 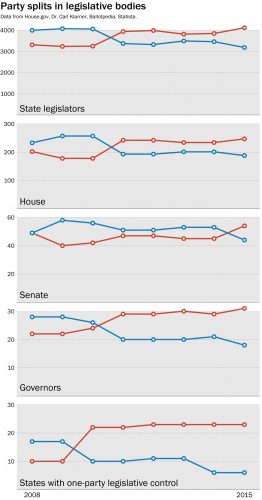