Ever since 1945, the closing of the horrific World War II, the Al Smith dinner has existed to bring joy and hope to 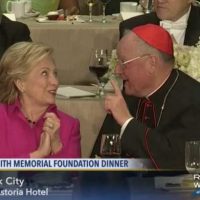 what was, at the time of its founding, an especially desolate world. Fundamentally, the event is a white tie fundraiser named in honor of Alfred E Smith, the onetime Governor of New York and first Catholic candidate for President of the United States. This charity “performance” and dinner is organized once a year to raise money for the benefit of poor children in New York, with aid to be offered by various Catholic charities that collect from it. In 1960, a tradition was started in which every four years, the two major contenders for the presidency would attend the dinner as featured speakers, and take the opportunity to “roast” one another – that is, no matter how contentious or even bitter their political race may be, they would take only good natured spurs at one another and tell other jokes for everyone to have a good laugh for a good cause.

This year the tradition was upheld, however, the gloves came off when both Donald Trump and Hillary Clinton traded gibes that made everyone feel uncomfortable. Despite both coming off their final debate, in which they declined to shake hands with one another – attended the dinner and took the stage. Each candidate sparred with the other and themselves. Clinton joked about the irony of her speaking after Trump, as she would have thought he wouldn’t be so comfortable with a “peaceful transfer of power”, and also poked fun at her own perceived laziness when she said she had taken time away from her “rigorous nap schedule” to attend.

Meanwhile, our nontraditional candidate Trump recalled an encounter the two had supposedly had in the hallway, in which Clinton had accidentally bumped into Trump and said “Pardon me,” to which Trump ostensibly remarked that they’d have to talk about that after he won the presidency. He also lambasted himself and even his wife, saying the mainstream media must be biased against him since they loved a speech given by Michelle Obama, yet cried foul when Melania Trump delivered “the exact same speech” (a comical exaggeration of an incident when Melania had given a speech in which a few words turned out to have been taken from another speech given by the First Lady).

Trump would be criticized for the latter part of his performance, which some people found to have gone too far for humor and been motivated by personal animosity toward Clinton, though it seems that Trump was at least still trying to tell jokes. The media ran with this story for days. What’s never mentioned at all, of course, is the supreme irony of Hillary Clinton having been invited to this event in the first place. Let’s remember that the Al Smith dinner is a Catholic fundraiser, organized for the benefit of Catholic charities (and ultimately, hungry children). Let’s also remember that Hillary Clinton is no friend to Catholic people. She herself has made numerous derogatory comments about the beliefs of Catholic people, and those in her campaign have even been caught (thanks to secret internal e-mails being revealed to the public) discussing tactics to subvert the Catholic church and force change within that institution – be it wanted or not. Amazingly, Hillary Clinton felt comfortable attending a Catholic dinner after saying these things. Even more amazingly, she sat next to a Cardinal at that dinner, and somehow didn’t burst into flames.

Everyone is so quick to attack Donald Trump for just about anything these days. It’s as if they forget – or choose not to mention – that Hillary Clinton is a hate-filled criminal with active animosity towards large groups of Americans (such as Catholics). A wise man once said that those who live in glass houses shouldn’t throw stones. An even wiser one suggested that only he who is without sin should throw them.