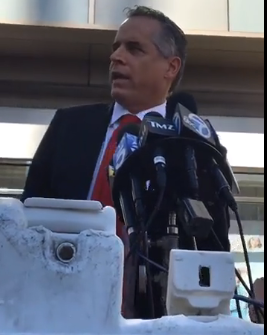 James Otis, 52, heir to the Otis Elevator Company, held a press conference in Hollywood explaining why he smashed Donald Trump’s star on Hollywood Boulevard.  Otis shakily tried to say why he believes Trump is evil yet people in the crowd yelled him down, asking ‘What about Hillary’s emails?’ and the Clinton Foundation pay-for-play.

Ironically the man who pounded Trump’s star to a pulp with a pickax last week was talking about how Trump promotes “anger” and “divisiveness”.   He also talked about suing Trump for sexual assault and other charges.

James Otis could face up to 3 years in jail for beating Trump’s star .

Will (or Won't) Obama Pardon Hillary Before Election?