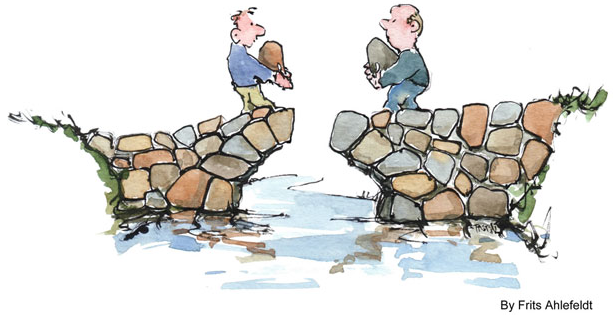 As I watched the sun rise on Wednesday morning, I breathed a sigh of relief. To me, Donald Trump’s Presidential victory was like a stay of execution for the United States. I had not always supported Trump. His rhetoric took some time to resonate with me. At no point did I ever consider voting for Hillary Clinton, but when I vote, I want to vote FOR someone as opposed to voting AGAINST someone. As my thinking about the situation evolved, the more enthusiastic I became about Trump’s candidacy. However, despite my relief, I was also aware that there were plenty of people feeling as much despair as I was feeling satisfaction. They felt the same way I would have felt had Clinton won.

I felt Trump had the level of support to win, but I was afraid that support could be negated by voter fraud. There were actual documented instances of voting shenanigans in early voting, so I was quite afraid. If Clinton had won legitimately, I wouldn’t have liked it, but I would have accepted it. I was absolutely positively sure the institutionalized opposition to Trump precluded any voter fraud in his favor. We live in a country where the people determine who governs. Whether the right person is elected or not is secondary to whether that person is the one chosen by the people. By winning the election, Trump reassured me, that at present, we still have legitimate elections. That in and of itself is reason to celebrate. The votes still count.

I was shocked that Clinton actually conceded the election to Trump and I was pleased President Obama invited Trump to the White House. I did not expect them to be that gracious. I was deeply impressed by Trump’s first words as President-elect. He was gracious and even complimentary towards Clinton. It wasn’t the time to be vindictive. He also called for all of America to come together. Despite all the nastiness of this campaign, in the end, it appears we will have a smooth transition of power.

Originally, I feared Trump could end up being a fascist dictator. As time passed, I realized Trump was hardly a fascist, but the fact remains I was afraid of him at one time despite ultimately coming to view him as a great patriot. Sadly, in today’s America, a true patriot is more likely to be denounced than commended. Our country has come to represent many ideologies that aren’t rooted in anything meaningful. A country can’t be based on a policy of appeasing everyone. It can however be based on a policy of inspiring everyone. Trump stirred patriotic passion and that is ultimately why he was elected.

This election was very divisive not only for the country as a whole, but also on a much more personal level. Friendships disintegrated over arguments. Supporters of both candidates were afraid to express their support publicly. It was a very uncomfortable situation. When people are passionate about things, they aren’t usually open to opposing views. This especially true of religion and politics. I am often disgusted at the childishness and outright disrespect people show one another when debating topics. Just because someone disagrees with me doesn’t mean I should insult them or think of them as stupid. It doesn’t make them my enemy.

Everything the mainstream media reported was pro-Clinton and anti-Trump. Therefore, I stopped watching and reading anything reported by those outlets. In my frustration, I turned to alternative right-wing news outlets. I was so agitated with the mainstream media I started to become angry at ANY negative comments about Trump. So, I began to listen to those who praised Trump and bashed Clinton. This only increased my disgust in regards to Clinton. The sad reality is during this election it was very easy to become monomaniacal about the candidate you supported. As a consequence, it became very hard to be rational.

No matter whether you preferred mainstream or alternative news outlets, as long as the discourse reinforced your own opinions, the more radical you were prone to become. It’s easy to fall into that trap. Each source offered some bits of truth, so depending on your point of view, there was some validity to what you heard. Many of us came to see either Clinton or Trump as the very embodiment of evil. While I haven’t changed my mind as to the potential disaster Clinton would have caused as President, I have learned a lesson.

I reached the point where I began to consider lambasting anyone who expressed pro-Clinton views. It was inconceivable to me how anyone could possibly support her. That level of emotion and state of mind is destructive. It helps no one. During the day of the election, I witnessed diehard supporters of both candidates arguing vigorously outside the building where I voted. It was an ugly sight and it made me realize a very important lesson about respect and decorum.

I would be feeling a lot of despair had Clinton won. Therefore, I feel compassion for those disappointed and terrified that Trump won. The key to making peace isn’t to point out why you are right and someone else is wrong. The answer isn’t to stage protests that result in violence. Protests have their place. If someone had stolen the election, that would be one thing, but no one is disputing Trump won this election. At this point protests against Trump are only going to make everyone more afraid and they will only serve to create a dangerous level of unrest.

The answer lies with the Constitution. It is a document that applies to all Americans. It is the one thing that unifies us all. Rather than make a Clinton supporter feel even worse, I feel the better course of action is to remind them that the Constitution is still in place. As long as that is the case, no one person should ever be allowed to destroy the Republic. The fact that we all share the view that the President can unilaterally dismantle our civilization should serve as a unifying force. If the Constitution is followed, there are checks and balances amongst the different branches of government. The President should never be able to infringe upon the rights we are given under the Constitution. However, virtually every President since George Washington has accrued more power to the Presidency.

At some point any Presidency could turn into a dictatorship and that should create fear in all of us. Just because I’m happy with the results of this election doesn’t mean I have nothing to fear in the future. The next President could make me just as afraid as those who now fear Trump. So, instead of arguing about differing ideologies, maybe all of us should get together and hold Congress more accountable. Every country needs a Head of State…a leader. The Founders never intended for the Presidency to be a dictatorship. We need to stop treating it as one. That is the key to stopping the fear. The Constitution has kept this country together for almost 250 years and it has withstood much worse threats over the course of our history. It’s important to remember that.