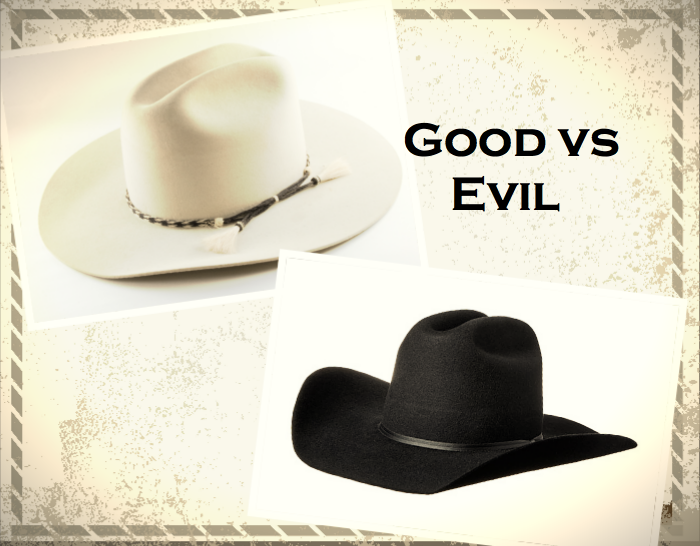 At one time the Western was the predominant form of movie and television entertainment. Though not as popular today, I believe that the Western will always have a place, because at their core, they are the best way to convey stories of good versus evil from a uniquely American perspective. Such stories often define us as a nation and convey through allegory a wide-range of issues from courage, honor, law, and respect to cowardice, corruption, lawlessness, and contempt. Moreover, many Westerns have some basis in reality. Some true stories of the Old West make for compelling drama without any embellishment.

This year’s Election certainly falls into this category.

Just look at the names involved: Trump versus Clinton sounds an awful lot like Earp versus Clanton. That rivalry resulted in the most famous gunfight of the Old West, the shootout at the O.K. Corral. The 135th anniversary of that famed shootout was this past Wednesday. Metaphorically speaking, little has changed since then.

If you took the parties involved in current politics, you could fit them into stereotypical roles of the Old West. Obama is the current Sheriff. Clinton is her heir-apparent. The mass media, large corporations, and foreign interests comprise a gang of outlaws/bandits. It is clear in this case that the Sheriff and Clinton are in league with the outlaw gang.

The idea that this Election was analogous to a Western occurred to me last year. However, it was Trump’s role that really confounded me. Trump is the cattle baron. I can’t think of any Western where the cattle baron, especially one with a New York accent ends up being the hero. Cattle barons usually appear in Westerns when a relative or associate runs afoul of the law. No one wants to cross the cattle baron because they have the means (in manpower) to overpower not only the Sheriff but the whole town.

Every great Western needs to tell a unique story. In this case, the cattle baron is in fact the protagonist. The Clinton gang (as they call themselves privately) felt everything was going their way. The media treats them with cult-like appreciation. The only competition left in the Sheriff election was the cattle baron. Perfect. Cattle barons are often seen as arrogant, distant, and disrespectful. One can almost imagine the Clinton gang prematurely breaking out the champagne. Trump was no different from any other cattle baron. A lot of people didn’t like him. If they could have picked which GOP candidates to face, they would have picked him.

Thus begins one of the great Westerns of all time. This cattle baron is different. He takes things personal. He is just as much motivated by pride as he is by money. It makes him the perfect foil to the Clinton gang. This gang is motivated purely by greed and the accumulation of power. Honor and respect for others is a foreign notion to them. If not so supremely and utterly corrupt, they would likely have never drawn the attention of the cattle baron. They underestimated him because a concept such as pride is beyond their grasp.

Trump rode into town to investigate what had gone amiss and ended up declaring his candidacy for Sheriff. At first few took him seriously, but it didn’t deter him. As a character in a Western, his character’s motto would be: “I don’t lose.” It’s the motto that drove him to become wealthy and it’s a code that forbids ever giving up. As the plot has progressed, the cattle baron has changed. At first he was driven by a need to call out the criminals. Perhaps his original motives even reflected a level of genuine concern about the town folk, though to a lesser extent than his own interests. However, as he came to realize the magnitude of the threat posed by the Clinton gang, he also began to see a deeper moral imperative. He has correctly surmised that once elected, the Clinton gang plans to destroy the town to make way for a new railroad as well as access to a secret gold mine only they know about. The town folk are expendable.

As the election drew closer the Clinton gang became more annoyed and angry with Trump. They began to steal his cattle, threaten his family, and promise to bring utter ruin on him. They even went as far as to incite violence. However, no matter what they do, the cattle baron is playing for keeps. He won’t back off. In fact, the cattle baron and the town folk began to connect and develop genuine respect for one another. The cattle baron has begun to raise doubts about the Clinton gang. Maybe they aren’t the good guys after all? This notion is reenforced by the escalating one-sidedness of the newspapers and the increasing aggression displayed by the gang. They even attempted to claim it is actually Trump, not Clinton who is in cahoots with the bad guys. None of their dirty tricks worked.

For the first time, the Clinton gang’s power is being challenged…by a cattle baron of all people!!! As they became more desperate, their contempt for the town folk became painfully obvious. People began to learn the gang views them as stupid and gullible. They also began to learn about their criminal activities. At the same time the cattle baron’s popularity grew as people gradually came to realize he wants to save the town. Though he never consciously set out to do so, the cattle baron has become a man of the people.

I hope this Western will climax with the cattle baron being elected…overcoming a last ditch effort by the Clinton gang to rig the election. Refusing to admit defeat, Obama, Clinton and the rest of the gang decide to ignore the election and remain in power. They won’t accept the results. However, Trump and the citizens confront them in the middle of town for one final epic showdown. Forced to face the fact that they no longer have total control, the bad guys back down. Sheriff Trump, the most unlikely of heroes arrests them just as the U.S. Marshals arrive to carry them away. The status quo has been changed forever.

This my narrative for the election. Each of us is free to define their own narrative. It’s up to each of us. Something epic is going on. It took time for me to understand the role Donald Trump was ultimately destined to play. He is the right man at the right time. We needed an unconventional outsider. Trump was willing to go all out. Would Kasich, Rubio, or Bush have ever taken the fight to Clinton and company the way Trump did? No. Would this battle have escalated to the point where the FBI could no longer stay silent? Probably not. Instead of a victory over some conventional GOP candidate, is it possible that Clinton will not only lose but also have to stand trial for her crimes?

For decades, people have been electing candidates who unmercifully bashed their opponents. Isn’t it hypocritical to criticize Trump for exposing ugly truths? I think it’s safe to say that the Clinton campaign NEVER expected such fierce opposition and that Trump’s tactics have made their lives far more difficult. Instead of walking back into the White House unopposed, maybe this final selfish power grab will prove to be the undoing of the Clintons? Trump isn’t the only one who has bravely exposed the truth about the Clintons but he has become the leader of a movement. He has stirred a sense of patriotic fervor. His crowds chant ‘USA USA USA!’ which to me highlights the fact that Clinton is properly viewed as un-American by many.

A hero’s significance is defined by the villain they oppose. Clinton represents a level of evil that’s hard to comprehend. If elected, I’m not sure that in 4 years our country will bear any resemblance to what it is today. She is literally willing to incite World War III if that is what it takes. We learn more about her level of corruption each day and I cringe at the danger she poses to our way of life. God’s Ways are mysterious indeed. In the end will Donald Trump ultimately prove to be the man who put a stop to her and what she represents? It sounded impossible to believe a year and a half ago. I never envisioned such an epic battle or the fact that it would be Trump of all people to inspire the American people to change direction.

It’s hard to come to grips with the notion that in modern day America, a single individual could arguably be all that stands between us and the destruction of our country. I believe Trump has changed in the last year and a half. Never before in the history of the United States has the entire mainstream media targeted one man. His campaign has suffered setbacks, but Trump has never given up. As his crowds grow in size and as people begin to realize our country is being stolen from us, Trump has proven himself a leader. I fail to see how anyone could challenge the establishment and endure the inevitable backlash and not be changed by the experience. Clinton’s money is coming from corporations. Consequently, she doesn’t campaign hard. Say what you will about Trump but he is campaigning the way you would expect a person who truly values the people to campaign. He is a man of courage and no one owns him. Lesser men have separated themselves from him, because they answer to others. Trump answers to the people. Great Americans are willing to stand alone and be the individuals they are instead of following a script written by others. We live in a very cynical age. Heroes are forbidden. I chose to believe this: If Trump wins the election, for that particular moment in time, he will be an American patriot of historical proportions. If he is the instrument that finally brings the Clintons and their cohorts to justice, he will go from hero to legend.

Mike Pence to Miami Crowd: "You Gotta Have Faith"

Obama to Make Islam a Race