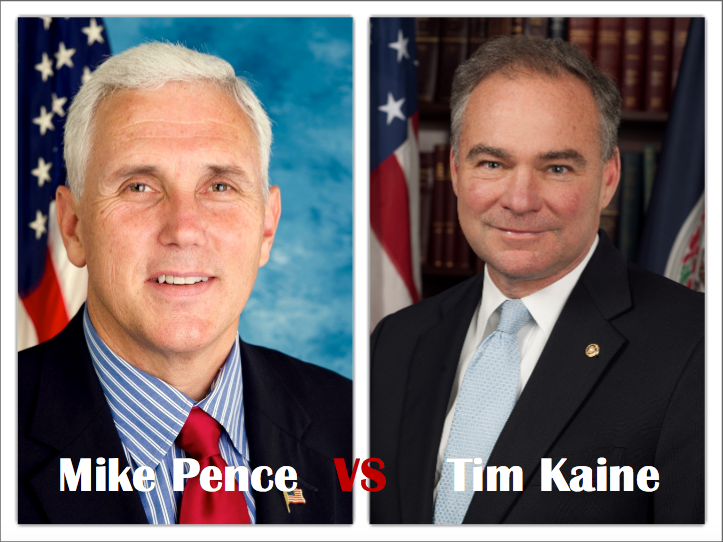 Thanks to Michael Dukes Show producer Brendon Berger for the title, but ‘Who’s Who of Who?” definitely describes the Tuesday night Vice President Debate.  It may not receive as many viewers as the first Presidential Debate (over 84 million), but you can definitely expect a few fireworks from the two VP hopefuls, Senator Tim Kaine (D-VA) and Indiana Governor Mike Pence.

According to USA Today, “Tim Kaine describes himself as ‘boring.’ Mike Pence calls himself a ‘B-list Republican celebrity.'”

So what should viewers expect from these two men, who many of their collegues describe as “gentlemen”?

Neither Kaine, 58, nor Pence, 57, had large national profiles when they were selected as vice presidential candidates. And both have been overshadowed by their well-known — and polarizing — running mates.

As a result, polls show more than one-third of voters don’t know enough about either to form an opinion.

“To some extent, this is still their introduction to a big part of the public,” Joel Goldstein, a vice presidential expert at the Saint Louis University School of Law, said of Tuesday’s debate. “Clinton and Trump have clearly been the focus, and Kaine and Pence are less-captivating, (less-)exciting figures.”

Both running mates have long records in government and extensive public speaking experience, although this will be their first nationally televised debate.

“We’ve got a sitting United States senator versus a former House member who spent years as a radio talk-show host,” said Jim Manley, a Democratic strategist and former aide to Senate Minority Leader Harry Reid, D-Nev. “As far as I’m concerned, they’re coming into the debate pretty even. Both are articulate and think well on their feet.”

Although both men are described as ‘even-tempered’ that doesn’t mean they won’t step up to the debate podiums very well prepared. From USA Today:

At the debate, Pence likely will be more focused than Trump was in attacking Clinton’s vulnerabilities, including her use of a private email server while secretary of State, her comment that half of Trump’s supporters were a “basket of deplorables,” and allegations that the Clinton Foundation was part of a pay-to-play scheme. Throughout the campaign, Pence has been the more disciplined messenger — as well as a “clarifier in chief” — for some of Trump’s controversial remarks.

“Pence is much more of a normal politician than Trump is,” Kamarck said. “I think Pence will be sort of steady and try to calm people’s worries.”

Kaine likely will challenge Pence on Trump’s comments about women, his business practices and his refusal to release his tax returns.

Pence undoubtedly will be asked about Trump’s recent criticisms of former Miss Universe Alicia Machado’s weight gain and his tweet that people should check out a sex tape of her. (There’s no evidence such a tape exists.)

Asked how Pence will address the issue, spokesman Marc Lotter said the Indiana governor is focused on the clear choice the election offers between Trump’s and Clinton’s visions for the future.

Kaine could repeat criticisms he’s made on the stump about the controversial “religious freedom” law Pence signed as governor. Kaine, who focused on civil rights cases while a lawyer in private practice, has called Pence’s record on LGBT issues “anti-civil rights.”

As always, The PolitiChicks will host a Facebook ‘Debate Watching Party’ (go to the PolitiChicks Facebook page for details) and they will also be live Tweeting throughout.

The Vice Presidential debate will be divided into nine time segments of approximately 10 minutes each. The moderator will ask an opening question, after which each candidate will have two minutes to respond. The moderator will use the balance of the time in the segment for a deeper discussion of the topic.

We Need a Leader, Not an Appeaser