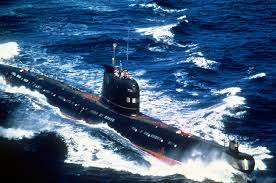 Vladimir Putin’s nuclear warships are pictured steaming towards the English Channel as Royal Navy prepares to scramble fleet.
The Russian fleet is believed to be planning military drills off the Scottish coast before heading towards Syria.

The 55,000 tonne Admiral Kuznetsov is travelling with the Pyotr Veliky battlecruiser, the Vice-Admiral Kulakov destroyer and large anti-submarine ships.

In addition to safeguarding maritime navigation, the ships are meant to “respond to new types of modern threats like piracy and international terrorism,”.

The fleet will reportedly carry out drills north of Scotland before sailing just a mile off the English coast.

The Royal Navy is on red alert after it was revealed that Russia plans to sail a fleet of warships along the British coast as it makes it way to Syria.

Two British warships, possibly HMS Duncan and HMS Richmond, will be scrambled by the Royal Navy to navigate the vessels past Britain, The Times reported.

Russia’s flagship Admiral Kuznetsov and seven additional vessels will pass the UK on their voyage to the war-torn country as it prepares to bomb rebel forces in Aleppo.

The fleet is expected to carry out practice bombing north of Scotland before potentially sailing down the English Channel – a mile off the coast of Britain.

It comes amid rapidly escalating tensions between the west and Russia, as the Kremlin looks to give a show of strength right on the doorstep of the UK.

The fearsome fleet is headed for Russia’s Mediterranean base in Tartus, Syria.

Royal Navy warships are being readied to intercept the fleet which could pass within miles of the British coast.

Russia’s flagship aircraft carrier Admiral Kuznetsov was amongst the ships to depart from the Arctic port of Severomorsk on Saturday.

The 55,000-tonne colossus is travelling with the Pyotr Veliky battlecruiser, the Vice-Admiral Kulakov destroyer and large anti-submarine ships.

The convoy was caught on camera by Norwegian spy planes on Monday.”

To read more, go to The Sun UK

Dinesh to Hillary: How Do You Go from Zero to $300 Million on a Gov't Salary?