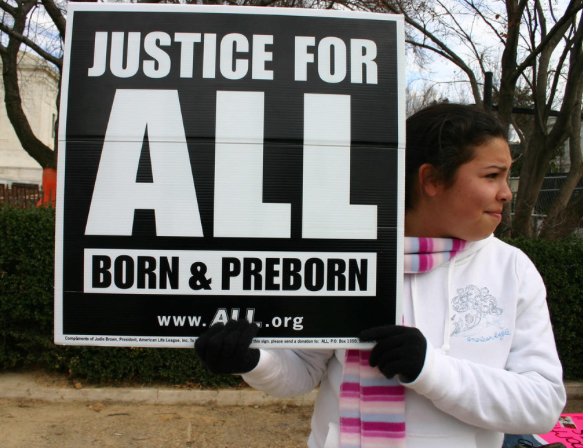 Abortion survivor Gianna Jessen wrote after the last presidential debate, “i have never seen a republican nominee ( even the establishment approved ones) EVER stand for the unborn like that in a debate. EVER. that is Courage.”

This is the very first time that we have ever had a viable presidential candidate who has stated that he would take actions that would lead to Roe v Wade being overturned.

I recognize that he hasn’t always been pro-life, and that he may be not 100% pro-life, yet. However, isn’t educating the public and changing attitudes a huge chunk of what the pro-life movement is about?

Think about the magnitude of that statement. A formerly pro-choice man with a great deal of influence has changed his position to become a pro-life candidate for President of the United States, and he has now publicly proclaimed on a debate stage in Las Vegas in front of the entire world that he would appoint pro-life Supreme Court Justices who would overturn Roe v Wade.

To use Donald Trump’s own words, “This is yuge!”

There are certainly candidates with a stronger stance on life, but they don’t have a chance of winning this time. Like it or not, the next President of the United States of America will be either Donald Trump or Hillary Clinton.  If pro-lifers want to send a message to the world through their vote, the strongest message they could possibly send that would be heard over the noise and clamor of politics and the media is to elect the only candidate with a chance of winning who was willing to publicly risk alienating some voters by making such a strong statement. What possible stronger message could you hope to send?

Many wonderful, passionate, committed pro-life people have said that they will not support Donald Trump for President, and are currently planning to vote 3rd party. They don’t want to vote “the lesser of two evils,” or they are voting their conscience, or they want to send a message that anything less than 100% pro-life is not acceptable. I get that. I really do, and I am not condemning you for your views. However, I ask you to prayerfully re-consider the ramifications of what Donald Trump could do regarding life issues, not the least of which is nominating Supreme Court Justices.

Donald Trump’s position on abortion, and other things, has been in a process of change and growth over some time. I expect that it will continue to develop, and there is reason to believe that it will become more pro-life, not less.

Here is why I say that: Ten and twenty years ago, Donald Trump was deeply involved in the business world. Recently, he has been transitioning into the world of politics as he campaigns for the presidency. In doing so, he has surrounded himself with people of influence in the political realm, some of whom are strongly pro-life. Many have been praying for and with him. He has been meeting with the people of the United States on the campaign trail, and he has been listening. Some of the things he says may well be political pandering, but surely not all. He may well have seen some of the pro-life videos about the horrors of late-term and partial-birth abortion, and he presented what he has learned on stage in Vegas.

I doubt that he had reason to pay attention to that message a decade ago. Because of his preparation for his candidacy, he looked into it, and was rightly horrified. It is one thing to hear pro-choicers say that late-term abortion is a life-saving procedure that anti-abortioners want to stop, and another thing entirely to learn the truth about what actually happens to the babies in late-term and partial-birth abortion. It is something that he may well have never truly considered before, and now, he has. And he made the choice to take a stand against it.

I see much hope in this. I see in Donald Trump a man who is willing to grow and learn, because ultimately his goal is to make America great again. Understanding that life is precious is a big part of making that happen. I know that pro-lifers understand that. The way that pro-life voters can help achieve that goal is to help elect Donald Trump, and defeat the 100% pro-choice Hillary Clinton. Once that happens, the doors of possibilities for making America more pro-life swing wide open. If Hillary Clinton gets elected through the default of pro-life voters, I honestly don’t know if our country will survive long enough for us to have another chance to put anyone else in the White House who openly opposes Roe v Wade.

History of Voter Fraud and Corruption in the United States