Media bias is always a factor in Presidential Election coverage. However, I never thought I would see the day when one candidate would denounce the media…claiming its a special interest group for the other candidate and be absolutely 100% correct.

The statements Donald Trump has made about the mainstream media would, at any other time in American history, seem paranoid or even crazy. However, he is correct. In fact if the mainstream media were actually subjected to a criminal trial, I don’t see how the prosecution could lose. One of the foundations of our legal system is ‘innocent until proven guilty beyond a reasonable doubt.’

This goes way beyond nutty conspiracy theories. Conspiracy theories deal with acts carried out in secrecy. They deal with knowledge and information that has been hidden from the general public. To say mainstream media bias exists against Trump has nothing to do with conspiracy. It’s blatantly obvious! Anyone can see it. For every one negative article about Hillary Clinton, there are six or seven about Trump. In fact the chances of seeing a positive article about Trump in the mainstream media is roughly the same as your chances of winning the lottery.

If I were on a jury to determine whether the mainstream media is guilty of being a special interest group for Clinton, I know I would vote to convict. I have no reasonable doubt. Note: I’m not addressing the mainstream media’s motivations or agenda. If someone committed a crime in broad daylight in front of a crowd of people, their motive is a moot point. I would be kind of silly for a defense attorney to argue their client had no motive for committing a crime when there are 100 eyewitnesses that have separately and independently identified the defendant as the perpetrator.

Many articles don’t even adhere to any semblance of legitimate journalism. I have seen multiple articles that have referred to Trump or his campaign having a meltdown. What meltdown? According to Merriam-Webster, a meltdown is defined as ‘a very fast collapse or failure’ or ‘a very fast loss of emotional self-control.’ Simply hurling accusations at Trump and digging up decades old incidents and ‘alleged’ misdeeds unfavorable to Trump does not constitute a campaign meltdown.

It’s like the media is trying to convince everyone that the issue is settled and Election Day is a mere formality. To support their claims, the mainstream media provides us with polls showing Clinton with a massive lead. Members of the media will often make comments like ‘Trump’s campaign is finished’ or ‘Trump can’t possibly win.’

However, there are some major questions that need to be asked. First, given that the media is so heavily biased against Trump in their writing, why should I assume the same bias doesn’t exist in their polling techniques? An article that addressed this issue can be read HERE.  I was impressed that I could find something that even raised such a question, let alone address it in a relatively matter-of-fact and professional manner.

I often think about the 1948 Presidential Election. In that election, sitting President Harry S. Truman defeated New York Governor Thomas E. Dewey despite the fact that all polling data showed Dewey winning handily. Even Truman himself didn’t think he would win. He went to bed early on election night only to be awoken by his Secret Service detail who informed him that he had won the election in a massive upset. 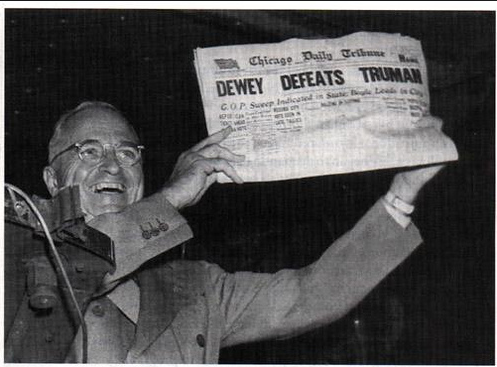 So convinced was the media that Dewey would win, the Chicago Times Tribune printed the famous headline, ‘Dewey Defeats Truman’ before all the election results had been reported. The picture of Truman holding the paper, which erroneously announced his defeat, is one of the most iconic photos of the 20th century. It is an inspiring image of a triumphant man gloating over the ‘conventional’ wisdom that predicted his demise.

In no way am I trying to compare the candidates in the 1948 election to the candidates in the 2016 election. I’m not an historian and I’m not qualified to delve into any similarities or differences in the ideologies or personalities involved in each election. I’m only looking at the circumstances and results. All I know is that despite a fractured party and a poor economy, Truman won. In fact, the Democratic Party wasn’t even thrilled to have him as their candidate. Nevertheless, ‘Give ‘Em Hell Harry’ campaigned hard while Dewey played it safe (limiting his public appearances and delivering safe speeches).

The polls in 1948 were wrong. How wrong? Truman won 304 electoral votes to Dewey’s 189. Third party candidate Strom Thurmond won 39 electoral votes (likely at the expense of Truman). That election wasn’t even close. Could it happen again?

Most of the polls predict Clinton will win with over 300 electoral votes. Yet, I watch Trump at large rallies and I see perhaps the most emotional crowds I have ever seen. I hear Trump supporters shouting ‘USA! USA! USA!’ I don’t see the same emotion or number of attendees at Clinton rallies. The polls are saying one thing and I’m looking at something else entirely.

The truth is that Trump’s campaign is not in meltdown. His campaign is not in total collapse. Trump is still addressing rallies and attacking his opponent. I also haven’t seen Trump lose all emotional control. Saying something 11 years ago isn’t the same as saying it last week. In fact I thought he gave a clutch performance at the last debate. He’s still fighting. He hasn’t collapsed into a quivering heap of nerves. Trump isn’t done by a long shot despite what anyone says. Therefore, the real question is this: If the mainstream media truly believes Trump has no chance, why do they spend so much time trying to convince everyone not to vote for him?

The only polling numbers that count are actual votes. Until then, nothing is assured.