When I was a kid we played a game called “Hot Potato” in which you threw a ball back and forth until someone yelled “Hot Potato!”  Whoever was left holding the ball was the loser.

I’m starting to think this might be a “Hot Potato” presidential election, with neither side really wanting to win.

Why would I say such a thing?  Because whoever gets saddled with the collapse of America’s healthcare system will forever be blamed for it, whether a deserving Democrat like Hillary or an ‘innocent’ Republican like Trump.  And certainly neither the DNC nor the RNC wants their side to be responsible for that.

The same thing happened to Pres. Bush.  Despite the fact that Bill Clinton spent 8 years of playing footsies with Islamists (and interns), George Bush still got blamed for 9/11 because it happened a few months into his presidency.  In other words, Bush caught Bill’s hot potato.

So here we are today, 8 years after another disastrous Democrat presidency and getting ready to “crown” our next leader.  But remember when Barack Obama gave out all of those Obamacare exemptions?  We were all in an uproar as Grinch-like Obama hand-selected “friends” (unions, lobbyists, etc) to give those exemptions to.  Even Congress gave themselves exemptions, for crying out loud.  We were also upset because the exemptions were set to expire right around the end of Obama’s presidency–aka NOW.

In other words, boy is it going to get ugly out there in Middle Class America in 2017.

As I type this, businesses and organizations nationwide are again battening their hatches and prepping for the onslaught.  Unfortunately while businesses are able to protect themselves by cutting wages and/or staff, regular people (like you and me) won’t be able to do so.  Fewer options for healthcare plans combined with skyrocketing premiums could be the deadly cocktail that finally does in America’s healthcare system as we know it.

“First will be the Affordable Care Act’s ‘essential benefits’ requirements. All plans—including those currently exempted for hardship and old plans extended for various reasons—must provide all of the law’s mandated benefits from Jan. 1, 2017. On average roughly 15% of plans offered in 2013 will not qualify for sale on the insurance exchanges once all extensions are completed. Depending on the state, as many as 60% of the plans sold in 2013 would not be permitted for sale.

The law’s ‘reinsurance’ program will also expire in 2017. Health insurers will no longer be able to bill the government for 80% of a patient’s health-care costs when they make more than $45,000 in annual claims. The multibillion-dollar risk corridors for insurance companies will also sunset in 2017—ending the taxpayer bailouts that kick in when insurance companies providing ACA plans lose money. Insurance companies will have neither option by 2017, leaving consumers to pick up the tab through premium payments. Federal subsidies will be unable to keep up with such dramatic rate spikes.

Confronted with this cost crisis, consumers will react the only way they know how: by looking for cheaper options such as the remaining high-deductible health plans offered by private companies and the exchanges as well as plans with very limited physician and hospital networks geared to achieve maximum efficiency for the average patient. These plans are likely to provide no or limited access to specialized facilities and physicians. Rising premiums will create a cyclical exodus from insurance plans, with each wave of departures fueling premium spikes that cause even more departures.

Employers will face increasing economic pressure to drop their plans, leaving employees with a choice between a dysfunctional Medicaid program if they’re poor enough or the same Obamacare exchanges that other people will be fleeing. By 2024 he (and a colleague) estimate that there will be more than 40 million uninsured, roughly 10% more than today. So perishes the Affordable Care Act’s promise to deliver universal health care—its fatal conceit.”

Sen. Johnson writes, “The Obama administration assumes that having health care coverage is the same thing as getting health care. This is absurd. But what is striking is that, even by the administration’s own gauge, their plan is headed for failure.” 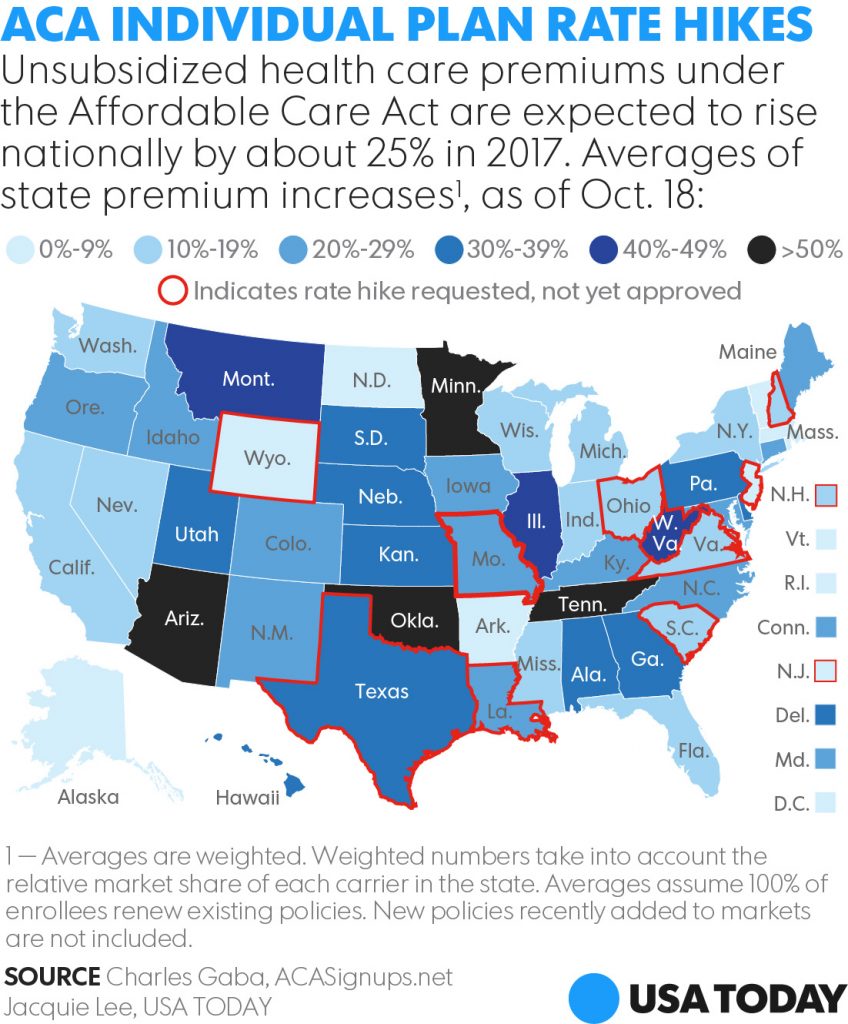 It’s already bad in many states.  In Arizona KJZZ reports,

The number of carriers on Maricopa’s exchange has dwindled in recent years. Two years ago, there were 12 carriers. Last year, that number dropped to 8. Now with only one left, more than 150,000 policyholders in the state’s most populous county will have to find new plans for next year.

About 85 percent of Arizonans on the exchange qualify for subsidies. Those who don’t will feel the rate hikes the most.

The biggest challenges for most people buying coverage will be switching plans and finding new doctors.

“Folks are going to have to deal with their provider relationships becoming upset or discontinued because these are HMO products that have very limited benefits out of network,” Hammond said.

In the rest of Arizona’s counties, except for Pima, Blue Cross and Blue Shield will be the only insurer. Those rates are going up 51 percent.

Other insurers will be offering plans off the exchange this year, but most are also raising rates by about 70 percent.

“These rate increases make it clear that Washington needs to move swiftly to address consumer needs under the Affordable Care Act,” Pennsylvania insurance commissioner Teresa Miller said in a statement.

Of course Democrats and insurance regulators are scrambling to reassure everyone that nothing bad will happen. Charles Gaba, a health data expert at ACASignups.net, told USA TODAY, “Part of regulators’ jobs is to keep insurance companies solvent so they can continue to give people insurance.”

In other words, the ACA and federal government-types are saying, “Trust us, we know what we’re doing.”  We’ve heard that before and no, we do not trust them anymore.

Worse of all, many of the people struggling the most are the people Obamacare was supposed to help.

Some of the lowest income people are struggling in states where many others who are eligible for minimal or no subsidies are also hard hit. A Department of Health and Human Services report in August found expanding Medicaid coverage to the poorest of the poor lowers marketplace premiums by 7%. Oklahoma and Tennessee — which have had a 76% and 56% increase respectively — did not expand Medicaid.

The main reason Obamacare was supposedly created was to offer insurance coverage to every American, including those with preexisting conditions.  But I’ve seen firsthand some of horrors my family members have gone through trying to find doctors willing to treat them, and/or having to jump through hoops to get needed medicine.

Andy Slavitt, acting administrator for Centers for Medicare and Medicaid said, “Nobody really knew what it would cost to insure sick people.  I don’t know how (anyone) could have known.”

Really, acting admin Andy?  I’d like explain to you exactly what you and all your bureaucrat friends could have (and should have) done. 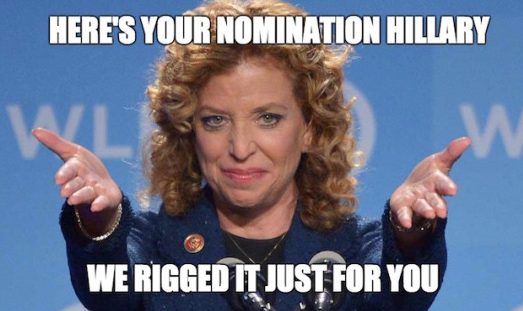 And here we are today, facing a very uncertain future in large part due to the pending Obamacare tsunami that is about to hit the U.S.  So is this a throwaway election, in which neither side really wants their candidate to win?  Or perhaps they are thinking he or she will only last one term?  This would explain why the DNC seems perfectly fine allowing Hillary to be their nominee, someone they did not want in 2008 when she had much less baggage (and better health).  This would also explain the RNC’s strange “absentee parenting” in Donald Trump’s nomination, and their wishy-washy bipolar-esque treatment of him.

We’ll see.  In the meantime, in the next few weeks my family and I are going to be pouring over paperwork, reading and researching everything we possibly can about the future of our own healthcare plans, and I hope you’ll do the same.

"We Need to Clean This Up": Clinton Staff Aware Hillary Had Emailed Obama from Her Private Server