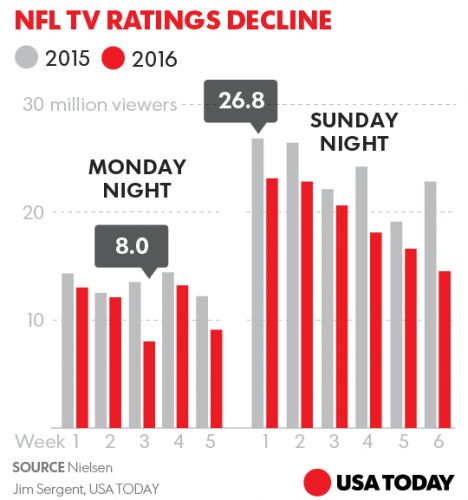 According to USA Today:

That wasn’t the entire company line, but the impact of the dramatic presidential election cycle was certainly a prevailing sentiment as NFL owners gathered Tuesday for their quarterly meeting and assessed the league’s unusual and precipitous dip in TV ratings.

Assuming the results aren’t, well, rigged, NFL games — the undisputed king of U.S. sports viewing — were down 11% for the first six weeks of the season when compared to a similar point last year.

Perhaps, it could have something to do with the number of NFL players kneeling during the national anthem?

Maybe Americans just want to take a break from all the politics to watch some good old American football instead of spoiled (oops, I mean “oppressed”) athletes engaging in political protests?

Oklahoma Teacher Tells Students: "To Be White Is To Be Racist.”