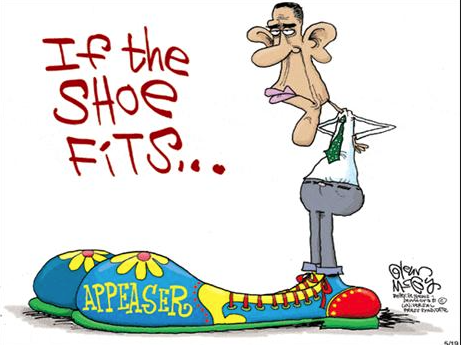 Imagine if one of our founding fathers, Thomas Paine, wrote his epic ‘Common Sense’ plea for American independence in today’s America. I’d give it maybe a 10% chance of actually being reported on favorably by today’s media. Suppose President Obama penned his political philosophy in a book entitled ‘The Complete Idiots Guide to Anarchy.’ I’m almost 100% sure that mainstream media would hail it as a masterpiece of unprecedented proportions. He would probably win the Pulitzer Prize, because after all, common sense is an anathema in today’s America…and today’s world for that matter.

What is the old saying? ‘If it looks like a duck and walks like a duck, it’s probably a duck. If you watched a duck walk by and said ‘what an impressive lion…no wonder it’s called the king of the jungle!’ I would hope that anyone around you would immediately label you as totally insane. That would be it…end of story…person sees a duck and calls it a lion…clearly their mind isn’t working properly.

Of course, every now and then, a remarkable person with an inspired vision may look at a situation that looks disastrous or ominous or hopeless and proclaim they see something else. Dr. Martin Luther King Jr. was such a person. His ‘I Have a Dream’ speech was not only noble, but prescient as well. King had three qualities that made him a great man. First, he had specific objectives. Take school segregation for example. Clearly segregation was unjust and racist. The remedy to that problem was crystal clear: integrate the schools. Let black children and white children learn together. Second, King understood how to protest legitimately. He is a revered figure because he insisted on peaceful protests. Dr. King never incited riots nor did he ever lose control over the protests he organized. You can respect protestors who exude dignity and a sense of morality. It’s hard to respect protestors who resort to violence and looting. Third, King was a man of courage. Given the times he lived in, he undoubtedly considered the possibility he would ultimately be assassinated. Tragically, that is what happened, but King remained true to the cause until the very end. He wasn’t a coward.

Instead of looking at all the negatives in contemporary America, maybe we need to take time to dwell on the positives. Absolutely there is still racism in America. Absolutely there is social injustice caused by racism. I’d never dismiss those truths, but at same time, if you compared the way black Americans were treated in say 1950 with how they are treated today…a lot of progress has been made. I’m not a black American, so it would be insulting for me to say I totally understand what it’s like to be a black person in America. It’s a very difficult subject to address in a manner that is respectful and broad minded…considering all factors. My point is that if you took a black American from 1916 and let them live in 2016 I’m pretty sure they would notice that many many positive changes have been made.

That being said, I find the actions of Colin Kaepernick to be deplorable. This guy should have been dismissed outright as a total idiot. I have zero respect for him and those who have suddenly become ‘enlightened’ and have decided to copy this imbecile. The way the media has handled this moron would be Exhibit A if I were to make the case that mainstream American media and American leaders have embraced the opposite of ‘common sense.’

I don’t believe Kaepernick has fought in any wars nor do I believe he has travelled to places where extreme oppression exists. He kneels during the national anthem because he is ashamed of our flag? Are you kidding me? How is that heroic? Sure. America is a horrible place to live. If that’s the case, then I suppose North Korea is an example of an utopian society. It’s ludicrous. To him it is a protest against the oppression of black people in America. To me it is an insult to the legacy of civil rights pioneers who actually stood for something and it is un-American.

It is utter insanity. This guy isn’t a man of vision. He is a second string quarterback who is trying to draw attention to himself. Ascribing anything worthy or honorable to him is nonsense. He has no idea what he is talking about. However, mainstream media is always quick to embrace everything anti-American. I believe that if Alger Hiss were alive today, President Obama would award him the Presidential Medal of Freedom and be praised for doing so. Logic has become that twisted.

So, rather than ignore Kaepernick, people have defended his actions. The fear is that anyone who labels him for what he is, an un-American ingrate who is totally oblivious to the privileges and rights he is granted as an American citizen, they too will be labeled as racist. There is one person who could and should have called him out. Last time I checked, the President of the United States is our leader. The President is the Commander-in-Chief, charged with sending American military into combat to die for freedom and to die for the flag that represents freedom. The President is also black. Not only that, he is the first black President. I’m not saying black Americans are immune from persecution, but at the same time is there another country on Earth where a member of a highly persecuted group could possibly run for, let alone win an open election to become the leader of that country?

If anyone should exude red, white and blue and take offense to any and all anti-American sentiment, it should be the President of the United States. The President is the de-facto leader of this country. Regardless of the President’s party affiliation or actual feelings about the American flag, they have a duty to protect the flag. Kaepernick is ashamed of his country. Fine. If I were President Obama I would offer to send Kaepaernick as an ambassador of goodwill on a tour of the world. Send him to Libya. Send him to Syria. Let him talk with the citizens of those countries. Perhaps in those places he will learn ways to truly address oppression. Perhaps in those places he will be able to find the secrets to their success and be able to make recommendations to the President on how we can aspire to achieve what they have already accomplished.

Here is the reality that the media and the President have failed to acknowledge: Kaepernick is clueless. Take a citizen from one of the worlds most oppressive countries. Show them Kaepernick, a person who has earned millions of dollars playing a sport of all things. Then tell them that Kaepernick is ashamed of the country that has been so good to him. Their head would explode. If you showed them the poorest white or black person and told them that those individuals were ashamed of America their head will still explode. Most Americans have absolutely no perspective and no understanding of how fortunate we are to live in this country.

President Obama isn’t a leader. He never does anything to create peace. He’s no where to be seen when riots take place after a police shooting. Why doesn’t he act like a leader and intervene and work to find solutions? It is nothing short of total disgrace that Obama has expressed support for Kaepernick. Our military deserves far better. Think about it. Their Commander-in-Chief, the person who could potentially order them to their deaths, doesn’t love the flag that they are being asked to die for…he is more interested in Kaepernick’s right to express himself under the First Amendment than he is honoring the sacrifices of those who make the greatest contribution to our continued freedom.

I recently talked to a veteran who decided not to reenlist. I asked why? They replied: ‘I was reading the Bible while visiting injured soldiers and was told I had to put it away because a Muslim woman complained it was offensive.’ How does this make sense? Is Obama even pro-American? The point I’m trying to make isn’t about religion. It’s the fact that a soldier’s freedom of speech can be limited while a wealthy professional athlete’s views are defended. What is wrong with this picture? Our Commander-in-Chief is about as American as Russian vodka.

Colin Kaepernick isn’t a hero. He isn’t anyone to emulate or admire. He is a lost soul who selfishly wants attention. He deserves no attention. He deserves to be treated for what he is: A traitor. He deserves condemnation not praise. Let the Supreme Court address the First Amendment. Let everyone else stand proudly when our anthem is played. It’s the least we can do to honor those who made our liberty possible.

The Question No One Dares to Ask Hillary

Tuesday VP Debate: Who's Who of Who? What To Expect