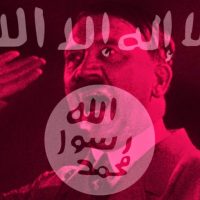 Lest we forget, in the 1930s and 40s, a radical group called the National Socialists – more commonly referred to as Nazis – rose to power in and ruled Germany, necessitating the bloodiest, most brutal war in human history to depose them. These Nazis were a detestable, supremacist group with a strong belief in absolute dictatorial governance, and under their watch, countless people were murdered – often in slow, torturous ways – for the crime of thinking or being different from their overlords. The Nazis longed for world domination, gaining more support than anyone feared they could, and nobody was safe as they spread like a cancer across Europe.

It was actually slightly before this, in 1928, that the Muslim Brotherhood was founded in Egypt. That group was conceived and has grown as a vile, supremacist group with a strong belief in absolute dictatorial governance, and under their watch, countless people have been murdered – often in slow, torturous ways – for the crime of thinking or being different from their overlords. The Brotherhood has always longed for world domination, has gained more support than anybody ever feared they could, and nobody has been safe as they continue to spread like a cancer across the Middle East and Europe.

If the two sound a bit similar, it’s because they are – and more than just a bit. One is based on uncompromising interpretation of strict religious doctrine and the other was mostly secular, but many of the important differences end there. The Nazis believed in the natural superiority of the German people and the Aryan race, while the Muslim Brotherhood believes that only followers of a particularly harsh, twisted version of Islam know the “truth” and that everyone else is morally inferior. Germans in the 30s and 40s exterminated people who belonged to what they believed were “lesser” races, such as Jewish and Gypsy people; the Muslim Brotherhood hates Jews as well (for spiritual, if not racial reasons), but also Christians, and anyone else who follows a faith different from their own, and has murdered countless scores of such people. And perhaps most importantly, the Nazis believed and the Brotherhood believes that they have the right to conquer the world and take ownership of it for themselves and their ideology.

These similarities are important to understand, in order that people can appreciate the magnitude of the threat we face today. Those who might still (despite the countless terrorist attacks that have now occurred on American soil, and their many victims) feel that radical Islam is some far-away threat that only exists on the other side of the world, are mostly educated on the history of the Nazis and the severity of the danger they posed to the future of the human race. They were no distant threat that we could afford to ignore. They had no regard for human life and they wanted the world for their own, and it took an enormous commitment of blood and resources and an alliance of some of the most powerful nations on Earth to stop them. Even so, wholly excluding military casualties, they still murdered over 10 million innocent civilians (the oft-quoted figure of 6 million refers only to the Nazis’ Jewish victims; sadly, there were many more).

The only difference between the Nazis of the past and the radical Islam of the Muslim Brotherhood in the present is means. Make no mistake, if the Muslim Brotherhood controlled several nations as ISIS marches from Syria into Iraq, Yemen, the Sinai and Libya, and Libya is considered by ISIS a gateway to conquering Europe. This is something that is perilously close to happening with the rise of ISIS and its “caliphate” – its body count would be no lower than that of the Nazis, and many of its victims would be Americans. They are not above ethnic cleansing of the sort favored by the Germans in the 40s, and they see all of Western civilization as their enemy.

Are the battle lines for a new global conflict being drawn? Are we witnessing the first days of a global war to end all wars. Anyone who refuses to accept that recent events do not bear all the hallmarks of previous world wars is living in denial.

Put simply, a world war is a worldwide confrontation played out across continents between the world’s superpowers, battling to establish or rearrange the world order committing heinous crimes against humanity.

But none have come anywhere close to Hitler’s methodical and highly organized system of mass murder.

We must be vigilant, and we must understand just what it is we face. Radical Islam is a danger to our very way of life, and ignoring it or pretending it is some small fringe group that do no real harm to anyone is an invitation to some of the most heartless, evil people the world has ever seen in nearly a century.

AlfonZo Rachel: My Observations on the Trump/Clinton Debate

The Internet, Amusement Parks, and Everything In-Between: The Erosion of Free Speech