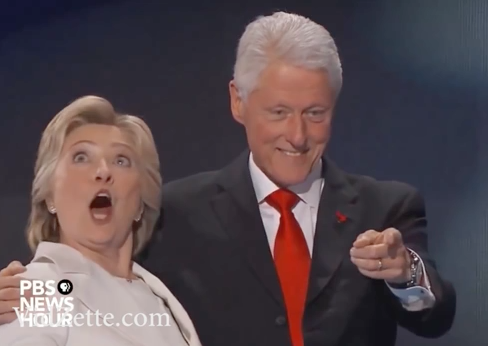 An artist erected an obscene statue of Hillary Clinton in downtown Manhattan Tuesday morning causing a heated fight between defenders of the profane piece of protest art and women trying to tear it down.

The grotesque caricature of the Democratic candidate appeared outside the Bowling Green station during morning rush hour on Tuesday and shows Clinton with hoofed feet and a Wall Street banker resting his head on her bare breasts.

NY Daily News reports the statue was up for less than three hours before an enraged woman knocked it over and yelled at the artist who created it.

In the video, a woman, identified by NY Daily News as Nancy, can be seen struggling with the artist, 27-year-old Anthony Scioli.

As Scioli tried to set the statue back up, Nancy sat on it to prevent him.

“This lady shows up and tips it over and starts assaulting anyone who tried to put it back up!,” a witness told NY Daily News.

A small crowd of morning commuters hovered around the scene with their phones out, some of whom started hurling insults and picking sides in the debate over the statue.

Around 8:30 a.m. officers with the counterterrorism unit arrived to the scene and ordered Scioli to dismantle and remove the statue because he failed to get a permit for the demonstration. No one was arrested and no one received a summons, according to police. The statue was taken away in a van moments later, cops said.

In an Insane World Does a Bully Become an Antihero?

Election Divisiveness 2016: Why Can’t We Be Friends?